A museologist by profession, Swosti Rajbhandari Kayastha started her career as a curator in 2014 when she joined the Nepal Art Council. There, she worked closely with Sagar Rana and Dina Bangdel who broadened her horizon about art curation and guided her. At Nepal Art Council, she started to experiment using different themes to showcase art. But, in 2015, she left for the University College London’s UCL Qatar programme, where she did her second master’s in museum and gallery practice. Returning home, she has been teaching museology at Lumbini Buddhist University while she has also been consulting at various museums.

On the occasion of International Museum Day, Onlinekhabar spoke to Kayastha about the definition and importance of museums and what Nepali museums should do in order to stay relevant in the modern age.

How would you define a museum’s role? Has it changed since its inception centuries ago?

The role of museums has definitely changed with time. They were initially a centre for collecting art and artefacts, but slowly its functions evolved. From a storehouse, it started to become a centre for learning. Its primary role of collecting objects and preserving them has not changed since museums started in the 1700s. One function that has changed is it has become a place for learning for people who want to know about the objects that are at the museums. Museums have also been active in communicating what these objects mean because that is one important factor that helps when putting up an exhibition. These functions will continue to evolve with time.

Do you see Nepali museums following these functions?

Museums here are trying. Since 2015, a lot has been done at the Patan Museum and National Museum, but a lot more needs to be done in Nepal. One problem I see is the state does not really care about museums and its importance and does not set aside adequate budgets for it. It needs to understand that museums are more than a store. Until the state pays attention to museums here in Nepal, its function will remain vague.

As members of the public, what can one do to ensure that museums are still relevant?

To start with, we need to visit museums. When we do visit, we need to ask questions and hold dialogues with the museums. In the west, there are guided tours done by the museum. There are guides here too, but we hardly ask for one. I know that going back to museums is pointless here in Nepal, but the people need to tell the museums to do something new and different every six months.

But, in a digital age, do museums have to reinvent themselves to appeal to a younger crowd?

They have to. First of all, we need to make museums more attractive and engaging. A guided tour is a start. I see schools taking children to museums, but they do not use the guides that are on offer. I am sure the session would be a lot engaging if schools used these guides.

Another thing they can do is an audio tour, which will be something new here. But, it will work out quite well if they try. Setting up quizzes after the tour and use of tablets through which one could get a better understanding of the object is also a way to go.

Museums in Nepal are still stuck in the 20th-century mode, but slowly things are changing. It will take time for it to appeal to a younger crowd because like I said, the government has not put museums as its priority.

They surely can because they generally showcase only around 50 per cent of the objects they have. I would recommend doing temporary exhibitions every six months so that interested people can revisit these museums. From what I know, people will go if they do this.

Who preserves the artefacts? Do museums have skilled human resources in this regards

I do not think there is a ‘conservator’ position in museums, but I believe every museum has a chemist who is tasked to take care of the objects. There are people but very few experts. Griha Man Singh who retired from the Department of Archaeology is one who, due to lack of skilled people, still works to preserve objects. He conducts workshops to pass down his knowledge to a young group of chemists who work at various museums. But, to answer your questions, no, Nepal does not have enough skilled human resources in this regard.

People often say that Durbar Squares of Kathmandu are open museums. But, when a foreigner goes there, they do not have any information about the place. How can it be made more attractive for these people?

Like I said before, we can make these heritage sites interactive because they are open museums. The Durbar Squares in the valley do not even have a board that explains to a tourist going without a guide what monument is what and when it was built. We need to use interpretation panels to educate both Nepalis and foreigners about these monuments. A map can also be very helpful. If we create a path from one monument to another using technology or a simple board that tells the story of the monument, a lot of good can happen. 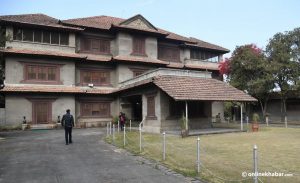 Inside Narayanhiti: A tour of King Birendra’s private residence