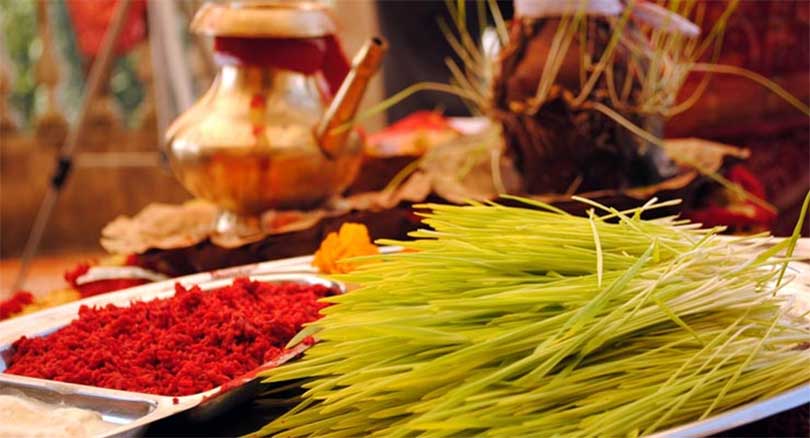 Tika and jamara for the tenth day of Dashain.

Nepal’s greatest festival, Badadashain, is over after the celebration of two weeks now. Its name beginning with ‘bada’ (that means ‘big’) suggests there are some other ‘smaller’ Dashains also. So where have they gone?

Cultural experts claim Nepal had a practice of celebrating four Dashains a year in the past. The eighth day of the waxing moon (Shukla Paksha) in Chaitra (March/April) is celebrated as Chaite Dashain. This is a smaller festival than Badadashain. Similarly, there are two other Navaratras that have ceased to exist, and many are not aware of them today. Even though some strict tantric priests are still continuing to follow the rituals around these times also, for common people, they have been limited to once-upon-a-time stories.

According to cultural expert Binod Raj Sharma, in medieval Nepal, people also celebrated Navaratras in the Shukla Pakshas in Ashadh (June/July) and Magh (January/February) also, as Summer Navaratra and Winter Navaratra respectively. They both have their own importance although the deities worshipped are the same during all four Dashains every year. However, the rituals and traditions used to be different.

Its evidence can be seen in the National Archives. Sharma says, “In the archives, we can find evidence of summer, winter, spring, and autumn Dashains and traditions related to them. They suggest the common people also used to celebrate them.”

What are the differences between the four Dashains?

There may not be a huge difference between the four Dashains, but differences can be seen in the rituals and their processes. There were no all-season fruits then like today. So, rituals were performed with seasonal fruits with their unique rituals and sacrifices.

The medieval society was class-based and caste-based. Different classes and castes of people celebrated festivals differently. According to Sharma, the Summer Navaratra was celebrated according to the rituals and customs of the Brahman community including the way they made sacrifices as well as puja procedures.

In all the Navaratras, sacrifices were common. However, in the Summer Navaratra, people would not use a sword to give sacrifices whereas it was a must in the autumn one, which later became the ‘Bada’ Dashain. According to Sharma, till the reign of former King Birendra, the Brahman priests were made to use swords for sacrifices in the Autumn Navaratra. This, he says, shows that Brahmans used to celebrate the Autumn Navaratra as per the Chhetri rules.

According to Nepal Panchanga Nirnayak Samiti’s former chair and Dharma Sabha Nepal chair Madhav Prasad Bhattarai, the practice of giving sacrifices in all four Dashains has been a long practice.

He thinks the availability of various goods for sacrifice during the autumn made the Autumn Dashain the ‘bada’ (the greatest) one and all other Dashains have been overshadowed.

He says the sacrifices in the past were of Satvik and Tamasi ways. Not all people ate meat, and many used to make vows to appease gods and goddesses in the Satvik way. He says the old Satvik way of sacrifice has been continued till date.

One can still find the literary evidence of the festivals being celebrated in the Satvik way where ivy gourd is taken as the representation of buffalo, citron as a representation of goat, sugarcane as chicken, ginger as a hen, and radish as a representation of sheep. And, because these fruits and vegetables were not found in all seasons, their alternatives have also been mentioned for different Dashain rituals.

In all four Dashains, the common factor is that people worship Navadurga. However, these deities have different names in different places.

On the first day of the Navaratra (Ghatasthapana), people sow barley seeds (can also be maize or wheat seeds) at dashain-ghars or Durga worship places.