In every nook and cranny of the city, what see you today are rap battles. And, all this has been made possible by All Nepal Thugs Family (ANTF) and rather its announcement on social media that the winner of the rap battle will get a cash prize of Rs 100,000.

But, more than the cash prize, the ‘rare platform’ has attracted the youth. The youth are from the generation whose talents are not valued by society.

So, they carry some grievances towards that very society, their family and themselves. Grievances that have started a fire in their hearts, and that they want to pour out all that complaints, grievances, impulses, pain and frustration somewhere, that too poetically… It is their way of expression and vocabulary of their life.

But, he is not known by his real name, and his stage name is super-famous. G-Bob stands in the middle of the crowd with judges on one side and his opponent on the other. The eager crowd is gathered to watch the growing tension between the two. The moderator announces, “The first round starts now, let’s go” and passes the mic to G-Bob.

And, with his unique style, G-Bob rises to the top in the eccentric world of rap music. His confidence, his sharp wit, his uninterrupted creation and aggressive yet flawless delivery, all have made his presence so powerful and make it a sight to behold.

In reply, G-Bob’s competitor, Sirupate scoffs and says he neither has nice shoes nor a way to hold his mic. Swiftly, G-Bob responds in his own style.

He comes quietly, wins the round and quietly, in the same way, gets lost in the crowd and the noise. But, his edgy words are still lingering in the air leaving people to wonder ‘Who is he?’ ‘Where did he come from?’ ‘Where did he go?’

G-Bob is a temporary resident of Godavari in Lalitpur whereas his ancestral home is in Gorkha. He passed grade 12 without going to school and enrolled as a student in a college to study for a bachelor’s in information technology.

He is carefree but brilliant and uses his life as content for his rap battles. A street poet by nature, always moving and very creative, his aspiration is to become an artist. Thus, Sudeep Bhandari became G-Bob.

Famous storyteller Saigrace Pokharel discusses G-Bob in one of his video series, saying, “The words he chooses include the words used by old people and the slang used by contemporary youth. He is talented in his replies and is a complete package of literature, music and rap.”

His unbeaten streak took him through the first, second and then third rounds of the ANTF rap battle. With his talent, he melted the hearts of the judges and opponents alike.

Similarly, his next rap battle with Maila became public on YouTube. And, his words spread like wildfire, from the dance floors of nightclubs to TikTok and from the YouTube trending section to the hearts of the youth.

Because his words resonated well with the people, G-Bob went viral overnight.

Where does he come from?

As the ANTF was beginning its preparation for the final clash, youth were eagerly awaiting his final battle. People were excited even though this rap battle was held in some unnamed street of Kathmandu, many even travelled to Kathmandu all the way from Tanahun.

In the meantime, rumours started circulating that someone abducted G-Bob. Where did he go? What is he doing? Nobody knows. His news put direct pressure on the organisers.

Behind the success, however, people did not know that this beloved rapper was losing one battle after another with himself. His drug addiction was squeezing the life out of him. This 21-year-old rapper has been struggling with his addiction for the last five years. Social media is flowing with videos of the rapper showing how sad his story is, where he is shown to be in an unconscious state.

The rap battle judges are equally enthusiastic about G-Bob’s talent as they are about his addiction. Judge Surendra Gurung ‘Hakim Dai’ had even warned him, “G-Bob has always been a boy with his unique freestyle, but I told him I would disqualify him if he came stoned [with his dazed/ addicted face].”

In one of the videos, the rapper is seen pouring out his grief and reveals that someone is blackmailing him by holding him hostage. “His relationship with me was as a dealer and a user,” said G-Bob in a video interview together with Koinch G. “After my video with Maila, I was approached for an artistic project and this very person is now holding me hostage in Pokhara for three days.”

G-Bob filed a complaint against those who allegedly abducted him. He appealed to the police to arrest the abductors, question them and leave them with a warning. He has been rescued, brought back to Kathmandu and placed in the correction centre. And, everyone is waiting for his comeback.

Life comes in between

But, life does not roll out as expected. It is not sure when he would go missing again. The final rap battle concluded without G-Bob and fans were furious with the organisers, accusing them that they hid G-Bob. Finally, G-Bob’s mother on a Facebook live video clarified that he could not attend the finale due to his physical disability and even apologised on his behalf.

On the other hand, when the final was ongoing, G-Bob jumped out of the window of the rehab centre and ran to Gorkha, his ancestral home. The ANTF team also reached Gorkha overnight in search of him.

Video footage circulating shows a conversation between Hakim Dai and G-Bob. Hakim Dai says, “There are allegations on us that we abducted you and did not allow you to perform in the finale. How did you jump out of there? You could have performed in the finale… Do you even know how many fans were there that day chanting ‘G-Bob’ ‘G-Bob’?”

Next in the video, G-Bob does not seem to be conscious; rather he is only listening to Hakim Dai. Hakim Dai advises him to give up drugs and he could be the next Yama Buddha.

Today, g-Bob probably realised how drugs can be addictive and ruin life for there are signs that he expressed his wish to come out of the addiction. 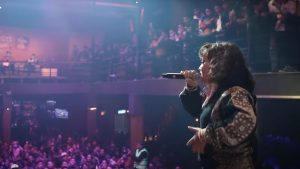