Sudhir Shrestha started making TikTok videos for fun three years ago. These videos slowly started gaining attraction. Some even started going viral. His video of him and his wife, in which they perform a dance set in the same manner that Shree Krishna Shrestha and Sweta Khadka danced in the song of a movie named Kohinoor, went viral. After that, it was no looking back for Shrestha.

Six months ago, he starred in his first music video titled Ae Hai Maya. After that, the floodgates opened as he has been a part of over 50 music videos like Sunana Pyari, Kura Katne Manchhe, Maya Garaula and Naboli Naboli.

In today’s digital age, there are a lot of people like Shrestha who have become overnight sensations. Some have fallen down in a night as well. People’s lives have been changed by technology and apps like TikTok which has become one of the most used apps in Nepal in recent times.

Everyone, from a child to a grown adult, seems to be on the app. While many are there for entertainment, there are a few who have made a career out of it. Especially wannabe actors who did not get to show their talents have now found a space to do so. Noticing them are directors looking for fresh faces.

Twins Prisma and Princi Khatiwada also rose into limelight through the platform as they made their music video debut in the single Hamro Maya Jindabad. Since then, the two have become superstars starring in nearly 20 music videos. The twin sisters have over 6.7 million followers on TikTok.

The Kathiwada twins are not the only twins in TikTok. There are a fair few. Dipa and Damanta Shrestha have over 2.5 million followers on TikTok. Success in the field soon got them offers from music video makers. Smarika-Samarika Dhakal, and Amar–Amrit Dhakal are two more twins who have landed jobs after getting popular on TikTok.

It is not just common people, TikTok has helped people who have already gotten movie jobs gain popularity. Reshma Ghimire acted in Yo Saino Maya Ko in 2017. But, as the movie did not do well, her stock fell. But, after she carried on making TikTok videos, directors took notice and has been dubbed the TikTok queen. She has starred in videos like Instako Photo, Kallai Thaha Chhaina, Nidauke Sapanima and Chhamchham Pauju to name a few.

There are others too. Majil Basnet, Garima Sharma, Usha Upreti, Shreya Sitaula all landed jobs after becoming TikTok stars. 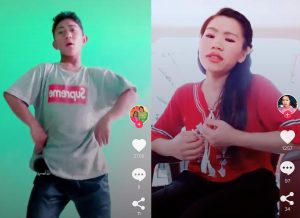 TikTok and YouTube make ordinary people ‘viral’–to ridicule them, at the end of the day