Even since France won the World Cup, I have had the urge to eat at a French place. Having visited two French restaurants in Kathmandu already, I was looking for another one and in the process, I stumbled across French Bakery. Located at Paknajol, the place is a little hard to find, but is one that is worth a visit.

The brains behind the place is Buddha Shrestha, who has been working in the food industry for the past 25 years. Having worked at French restaurants in multiple countries and polished his skills in Australia, Shrestha decided to open a bakery that served offered his patrons something different.

As Nepal lacked quality bakeries he opened one which was hygienic and served things that were not available in Kathmandu. After coming back from Australia, he opened a bakery at Mhehpi near Naya Bazaar in 2014. After the place gained some popularity, he decided to open one at Paknajol in 2015, which served as both a bakery and a café.

In the three years of operation, the place has been doing quite well catering both foreigners and Nepali customers. What makes the place a bit different to other sandwich places is that it brings a lot of items from abroad which enhances the taste of the items they prepare at the bakery. For example, the flour for the bread is brought all the way from Italy and some spices and cheese are imported from Australia. But I was here to try the one item that French Bakery is famous for – the staggering crispy chicken sandwich. Like the name, the dish is quite staggering and overwhelming. Most sandwiches we get here in Nepal include two slices of bread (either normal bread or sandwich bread) with chicken, lettuce, cheese or vegetables in between but this one was quite different. Instead of using a normal bread, Shrestha uses his own tender cylindrical bread.

Inside the bread, he puts in a lot of ingredients and you can choose what goes inside. Around six-inch-long hollow space in the bread makes room for the dressing, cheese and the delicious crispy chicken. If you want, you can pick and choose what goes in it. I opted for their normal sandwich which was standing tall on a wooden platter with a side of fried potatoes and coleslaw.

For a brief moment, I had to think about how to eat it but after careful planning, it wasn’t hard. Before indulging in the massive sandwich, I nibbled on a few pieces of chicken which were quite flavourful and tender with the right amount of crunchiness.

The stuffing in the sandwich, especially the dressing and the cheese, complimented both the bread and the chicken as it did not make the dish too dry. The potatoes deep fried with ginger, garlic and herbs gave it a distinctly unique flavour. I recommend you take someone with you to try the dish as I do not think a single person can eat the entire sandwich.

The place also offers various French, Australian and other European dishes along with some scrumptious bakery items amongst which I hear the chocolate truffle cake is the most famous along with their unique black forest cheesecake which one can order for events as well.

Shrestha adds that he wants everything the restaurant serves to be available to the general public which makes the place quite unique. The place sells items like vegemite and marmite, items famous in Australia and the UK respectively. They also offer a full vegan menu.

To sum up, the place is worth a visit especially for its warm atmosphere and their staggering sandwich. The place is open all day which makes it an ideal place for breakfast, lunch or dinner. 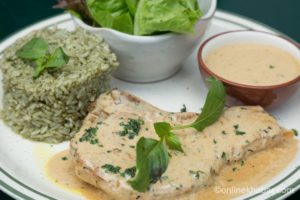