Salyan: The district less travelled by

Salyan is a destination seldom travelled to by those looking for a vacation. The district, which lies in the mid-western part of the country, holds a different appeal though.

Greenery of all hues will assault your senses while you are in Salyan. Its idyllic villages and culture exude a familiarity that may seem boring at first. But this is immediately broken once you soak into the distinct lives of the district’s denizens whose faith and devotion supersedes all other aspect of their lives.

The region, home to many temples of religious significance, is also famous all over Nepal for its oranges and ginger. Traders from all over the country, and even India, come to buy these priced commodities from the farmers.

Kapurkot, the gateway to Salyan, has one of the country’s busiest markets from where fresh fruits and vegetables are dispatched to many cities of the country.

The fertility of the land here can be attributed to the bountiful river Sarda which cuts through the lower part of the district. Nepalgunj is highly accessible by road and air from most parts of the country. Salyan lies 235km northeast from the city. You will reach Khalanga, Salyan’s district headquarter after a seven-hour bus ride from Nepalgunj.

Kapurkot, the gateway to the district, can be reached via the Rapti highway from Dang’s Tulsipur as well. This highway will further take you to Rukum. Alternatively, you could follow the Bheri river from Surkhet, and reach Salli Bazaar in western Salyan. This route will also take you to Jajarkot. Around 24 km west of Khalanga, lies Kupinde village. Here, the sprawling Kupinde Lake makes for an awesome sight. Surrounded by hills on all sides, the lake has remained free from any tampering. It is truly pristine. Locals say that the lake changes its hue three times every year. A temple dedicated to Barahdev is located adjacent to the lake where devotees come to pay respect twice every year, once during February and the other time during April.

The temple dedicated to Chattreswori devi in Chayachetra is the only Shaktipith in Nepal where animals are not sacrificed. It is believed that Lord Shiva rested the dead body of his wife Satidevi in this temple.

The temple holds immense significance for Hindus. It is located 19 km away from the district headquarter Khalanga. Spread in over 50 ropanis of land, the sprawling temple complex is host to many rituals that is unique to the region. North to the temple, you can see a massive fossil, which is believed to hold the remnants of Satidevi. Locals believe that the fossil holds the entire district of Salyan (it is only visible to the faithful!). 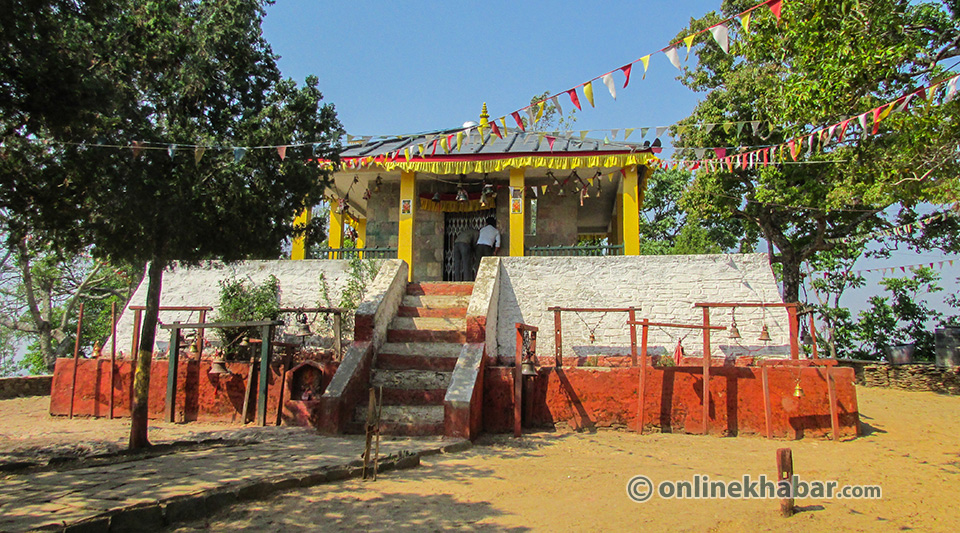 In Sarada Municipality of the district, the temple of Khairabang is located. At around 1600 ft above sea level, the temple attracts visitors who want to do away with vices such as anger, greed, lust and jealousy.

The temple hosts thousands of devotees twice every year when for 15 days, animal sacrifices are offered to the temple’s goddess Bhawani Bhuwaneswari. The temple can be reached from Khalanga via road. The 27 ropanis of land where the temple is located is relatively organised and holds potential to transform into a major pilgrimage site.

If you plan to go backpacking, make sure you stock up on all essentials like toiletries and clean clothes. Food and accommodation is hard to come by so make sure you make Khalanga your base before venturing out to the other part of the district.