Anita Devi gently opens the small muslin cloth. A bunch of thin, dusty caterpillars, speckled with a white mould and a slender grey tip come in view. Her son, Pratham (14) readily shows the old pictures on his mobile phone when these caterpillars were dusted and dried to reveal a golden yellow skin. “Many people come asking for this. You can also take a sample,” Anita offers in a voice that is evidently proud of its land.

Her house near Dharchula town in Uttarakhand overlooks the Sharda river, beyond which lie the mountains of Nepal. The region, an important stopover during the journey towards Kailash Mansarovar, is also a prominent trade centre for Nepalese who get access to cheaper goods that they carry back home through a lightly guarded suspension footbridge over the river. For the Rung people of the region, this border is illusory. They go for pilgrimages, get married and work across nationalities.

The geographical uniqueness also confers this region with Cordyceps (Ophiocordyceps sinensis), a coveted aphrodisiac popularly known as Himalayan Viagra and energy booster, found in alpine pasturelands of Himalayas. Chinese long-distance runners have been suspected of consuming Cordyceps to improve their performances (on track).

Scientists are yet to grow Cordyceps in a lab. In nature, its origin is gory: A parasitic fungus penetrates the caterpillar of the Swift moth underground and bursts out of it. This mixed morphology, a fungal head riding a caterpillar body, earns Cordyceps its Indian name, Keeda Jadi (insect herb). The fruiting body of the fungus also acts as a flag post. It protrudes above ground, making it easy for collectors to identify and pocket it.

Cleaned and air dried, the produce is then dispatched to international black markets via Nepal. This year, the collectors earned Rs one million (Rs 10 lakhs) for every kilogram of this fungus-infested caterpillar.

This caterpillar and fungus together grow money for villagers

“Keeda Jadi has changed our lives,” Anita informed. “Today, we can have concrete houses, vehicles, shops and send our kids to private schools and tuitions, just like service class people.” Her family belongs to a small village in Darma Valley, a 70-km ride uphill from Dharchula. They grow potatoes, millets and a few vegetables besides rearing sheep. Before snowstorms start slamming the valley, people descend to their winter homes, in and around Dharchula. Children stay here the whole year with relatives or grandparents to attend schools and tuitions. Except during May-June, the Cordyceps’ season.

Several government employees and defence personnel also take leave from service during the harvesting season. There is no caste or class barrier neither any limit on the number of family members who can access village pastures. The absence of rules thus favours large households.

“My brothers-in-law from cities often join in. It’s holiday time for them; they earn money while enjoying the scenery,” Anita pointed out. “For us, this time accounts for the whole year.”

She leaves home with her two sons at 5 AM, carrying between them a tarpaulin tent for camping, a few days’ ration, and utensils. They reach the pasture by noon, a little before other villagers. Her heavy frame and the boys, she claims, slow her down. Once in the pasture, they spend most of their time crawling on the ground, trying to locate Cordyceps among other grasses.

“One of my relatives fainted and fell off the cliff while going uphill,” Anita said. “We could not even trace her body.”

Risk also comes from intruders who want to access the village pastures or snatch the booty. Barring a tiff between Baling and Nagling villages over legal access rights to a pasture, which was sorted out through revenue records, Darma Valley has largely remained peaceful. In other parts of Uttarakhand, however, collectors carry guns and lockable suitcases to thwart any robbery attempts, a drastic transition from an idyllic mountain life of yore.

Dinesh Singh, a 32-year-old farmer, used to grow rajmah (Kidney Bean), potato, buckwheat and medicinal plants on his farm at Baling village. Since the discovery of Cordyceps in the pastures, his cropped land has shrunk by one fourth. “Why till land when you can put that effort into finding Keeda Jadi,” he asked. “Sale of surplus crops used to fetch me just Rs 50,000 while Keeda Jadi gets Rs 5 lakh per season. Now we farm only for self-consumption.”

In the past people also cultivated maize in small plots around their winter homes, sold river sand and handcrafted carpets from sheep wool to supplement incomes. “There is no land to grow maize now as houses have expanded and we have enough money to avoid hard labour,” reasoned Lakshmi Devi, who has seen poverty-ridden, strenuous days. “Now, winter is time to eat, sleep and attend weddings.”

This story is similar to the ones from Tibet, Bhutan and Nepal

Parts of Tibet, Bhutan and Nepal, which have been trading Cordyceps much before India, have seen similar economic progress. Unlike other livelihood options, collecting the fungus requires neither capital investment nor educational qualifications while profits go directly to people, in cash. Sale of Cordyceps is banned in India. Sikkim, another Himalayan state where the fungus is found, has acquired sniffer dogs specifically trained to detect Cordyceps on a person. 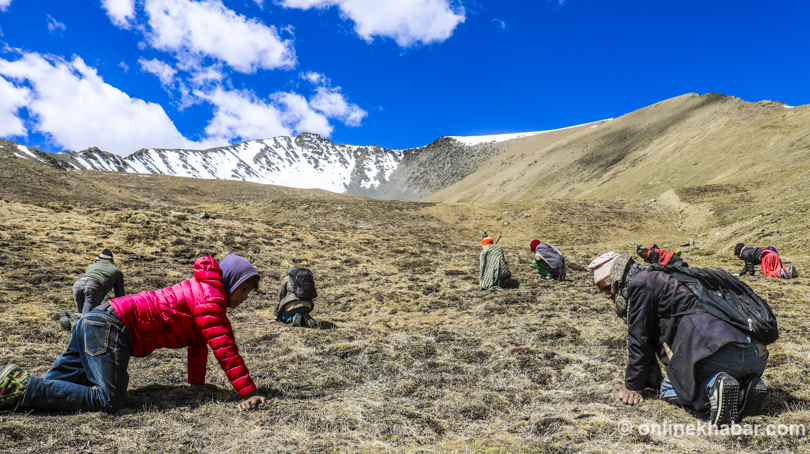 Estimates suggest that Uttarakhand supplies more than 400 kg of the product to global black markets every year. Forest department confiscates the harvest once in a while but regulation is not always possible. Anita narrated an instance when forest guards caught a woman with her harvest. They threatened to put her in prison. “The woman warned she would jump off the cliff if her bag is not returned. The scared forest guards had to retreat,” she laughed, but then turned sombre. “Keeda Jadi sustains our children. We will fight anyone who takes it away from us.”

The resource, however, is already slipping away.

“When we first discovered Keeda Jadi in 2003, it was growing like a crop, hundreds of them all over the place. In initial years there were fewer people and one could collect 50 to 250 pieces a day. The going rate was only Rs 2 per piece,” Dinesh confided. “As the price rose, more people joined in. Today you will be lucky to find five pieces in a day. Many return empty-handed.”

Of the 250 people who go from Baling village for collection, only half are able to find it. “There are so many of us going and staying there for a long time. Gods get annoyed. It is Dev Bhoomi (Land of Gods) and we throw plastic there,” Dinesh says. “Women go to collect Keeda Jadi even during periods. All this has led to its decline.”

Prolonged stays in the pastures have degraded the habitat which affects the density of the fungus and its host insect, said a study done by researchers of the zoology department at Pithoragarh-based LSM Government Postgraduate College. “The host caterpillar population declined by 14.8 per cent within just two years because of loss in vegetation cover and woody plants on which it feeds,” the study said. Another reason is faulty harvesting. Collectors dig out infected caterpillars usually before the fungus begins producing spores, essential for reproduction. This is because mature specimens are considered undesirable by consumers.

The situation is worse in areas under control of forest department because unlike village pastures jealously protected by people, these spaces are loosely guarded due to staff shortage and hence free for all.

Climate variability is further amplifying the negative effects of excessive harvesting and habitat destruction. Warming winters and declining snowfall are two prominent factors impacting production of Cordyceps across the Himalayas, said a study done by researchers from Stanford University and Colorado State University.

Local collectors acknowledge a link between snowfall and Cordyceps. “Keeda Jadi is known to flourish in snow. Around 15 years back, 20-25 feet snow would cover the region,” said 80-year-old Kalyan Singh, whose two sons go to pick the fungus. “Maximum snow depth nowadays is only 10-15 feet.”

Villages in Nepal have reduced the number of days collectors can go for harvesting besides designating camping sites 3-4 km away from the pastures. In contrast, the Indian scenario shows very little progress.

“Earlier some enterprising young men would go before time and start digging Cordyceps out from the snow,” he says. “Now most villages decide on a start date which has reduced pressure on the habitat to some extent.”

Another recommendation of Dr Negi to camp away from the site area is, however, not adhered to as people don’t want to waste time trekking to the pastures every day.

“It’s a gold mine no one wants to leave. Locals know that the production is affected by excessive harvesting but they don’t want any restrictions,” said Rakesh Sharma, chairman of the Uttarakhand Biodiversity Board. “It’s a very tricky situation for the government agencies. We have conducted public awareness workshops but that hasn’t helped.”

The biodiversity board works under the Biological Diversity Act to ensure equitable distribution, sustainable use and conservation of natural resources.

Bhutan has restricted the number of members per family who can go for harvesting and also arranged authorised auctions that fetch tax revenue which is used for environment protection activities. Uttarakhand state government also tried to involve village-level van panchayats and forest cooperatives in auctioning the produce but the price offered to collectors was substantially lower than what they were getting from the agents.

“In addition, the government didn’t know where to sell the product. The best option is to make the trade legal and allow open bidding where international buyers can also compete,” asserts Dr Negi. “This will be beneficial for everyone as the middlemen will be removed and the government can earn some revenue.”

Despite the non-existent governance and conservation model, people are sure that the land will continue to yield a substantial amount of Keeda Jadi. “Things will be better soon,” Anita believes. “Gods are upset but they can’t be cruel.”

This article was first published on mongabay