A team of Chinese experts has arrived in Nepal to examine the potential of petroleum extraction in Dailekh district of Karnali province.

Government officials say the team will begin its work from tomorrow.

Director General at the Department of Mines and Geology, Som Nath Sapkota, says the experts will divide themselves into three groups and conduct the study at different places.

Earlier in February, the Department had signed an agreement with China Geological Survey to carry out the examination within next three years. The CGS is considered one of the excellent oil mining institutions of the world.

Dailekh and Tansen of Palpa district have been selected for the first phase, according to the Department.

Sapkota says the second phase will conduct a drilling in various places of Dailekh and the third phase will prepare a report of the overall study.

The study will be over on time, according to him.

The Chinese side will cover all costs of the examination. 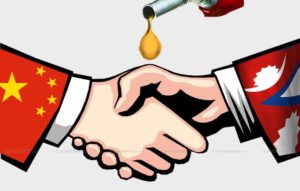