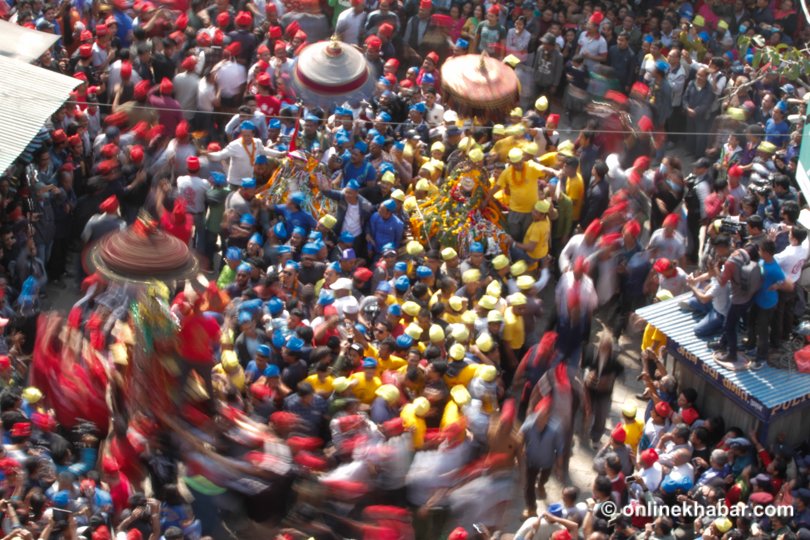 File: Paachahre Jatra (Khat Judhaune Jatra), one of the most colourful festivals in Kathmandu

Kathmandu’s religions and cultural complexity can make it as obscure as a mandala, multi-faceted, branched like an enormous tree, interwoven like its roots. Wandering through an old neighbourhood can feel like being in an artist’s labyrinth, full of creative genius, and heavy with mysticism. There is an itch to know more: who made that and why, what is that strange structure at the crossroads, why is that festival celebrated and why something is taboo. Cities as ancient as those of the valley take some deciphering. An afternoon barely suffices in locating the surface, let alone scratching it. Most of us cannot devote the lifetimes needed to arrive at an understanding that is more than appreciation. Thankfully, the valley has drawn enough people who have devoted lifetimes to doing just that. Tomes on its many facets have resulted. There are scholarly works as well as impassioned accounts of living in this mandala. Here are five timeless books about Kathmandu that relate to, celebrate and investigate the magic that lingers in the valley.

This hefty two-volume work is one of the seminal books about Kathmandu’s art, architecture, religion, festivals, gods, goddesses and all things that comprise its rich culture. Slusser first came to Nepal with her husband, a diplomat stationed in Kathmandu. Widely respected for her contribution to bringing Nepali art out of the shadow of the larger umbrella of Indian art, Slusser’s writing is lucid and richly descriptive. The book is an unfailing source for anyone looking to better understand the significance and meaning of wider practices as well as small details like stelae, tympanums or the reason behind the existence of a stone fish in the middle of a road.

The copulating figures on Nepali temple struts and friezes have long fascinated, amused, appalled and embarrassed those who lay eyes on them. Theories abound: the goddess of lightning is a virgin so she shies away from a building that carries images of sex, which ensures the building’s immunity from lightning strikes and fires; the images were meant as sex education in a society where there was no formal sex education; the sexual union is an allusion to the spiritual union of the two forces – male and female – that combine to fuel the universe. This riddle is just one of several that Vajracharya unravels in this work that has remained one of the most interesting books about Kathmandu over times. He has distilled a lifetime’s study of ancient Sanskrit texts and a career’s worth of studying carvings and paintings in religious sites into this seminal book. The book’s other plus point is the wonderfully lucid and simple writing, which makes the theses discussed in it intelligible even to non-academics.

Vajracharya’s central thesis is that the art of the Indian sub-continent, which has survived to this day in all its Vedic originality in the Kathmandu Valley, is an extension and expression of the agrarian lifestyle of its ancient populace. He digs deep (citing Vedic hymns) and ventures far (frescoes on the walls of the Ajanta Caves) for clues to corroborate his thesis, which is like a beam of light shone on Kathmandu’s art. Almost a trip on the historical continuum from ancient India to present-day Kathmandu, as one of the best books about Kathmandu ever, this work not only explains the art and practices of the Valley but also inspires us to look at them in a new light.

3. The Living Goddess, by Isabella Tree

Isabella Tree, an acclaimed travel writer, has woven this intriguing read around the quintessential enigma of Kathmandu: the Kumari. It took Tree a decade to research and write the book, and after reading the book one realises that that was necessary. This long period of research not only allowed Tree to forge relations with some of the custodians of the cult but also presented opportunities to watch the ancient cult cope with unprecedented historical events that threatened to undermine, even uproot, it. How the cult and its custodians deal with these changes – losing its biggest patron, the king, for example – illumines the difficulties of keeping a mystical cult alive amidst a city spiralling into modernity. Tree masterfully brings out the human side of this esoteric culture.

In one of the historical important books about Kathmandu, the author keeps well away from sensationalism, which is not easy given that the Kumari cult has been the subject of wild rumours for time immemorial. Nevertheless, she does mention some interesting tales associated with the Kumaris. For example, the elaborate pujas that King Birendra performed at midnight in the Hanuman Dhoka Palace.

Tree also retells, examines and explains, often with the help of experts and insiders, the historical background and cultural context behind such unique features of the Valley’s culture as the co-existence of Hinduism and Buddhism, the Kumari being a Buddhist, the origin of the Taleju Bhavani temple, reasons for the Valley’s sacredness, esoteric rituals performed during Dashain, why an incumbent Kumari should not bleed, the origin of eating buffalo meat, the connection between Nepali monarchs and Tantrism, why Bhaktapur is more Hindu in character and what aspect of its rulers Prithvi Narayan Shah detested.

On a personal note, Tree recounts the psychological impact of meeting a Kumari, ruminates on the symbolism of prostration before a little girl and what effect that has on the attitude of men towards women. This is also a reason why this remains one of the best books about Kathmandu to know about the culture and tradition here.

The title of this book gives little indication of the heartfelt chapters on the valley’s history, culture and architecture that it contains. Hagmüller, the head of the renovation project of the Patan Darbar into the Patan Museum, has managed to turn the geometry of architectural designs into poetic expressions. As he admits in the book: “…Though I have failed to learn the spoken language of my Newar neighbours, I have been rewarded with a measure of understanding of the poetic vernacular of their architecture and the rich articulation of their urban space.” He has shared ample of the rewards of a lifetime’s living and learning in the midst of that poetic vernacular.

As one of the most important books about Kathmandu, this work explains the museum, and like the museum, it endows and illuminates aspects of the architecture that abound outside the museum, in Patan Darbar Square, in the squares of Kathmandu and Bhaktapur, and all the old structures within the Valley. It is an eye-opener, an invitation to examine the heritage of this incredible Valley:

Readers benefit from the author’s eye for detail as they are important in all books about Kathmandu. The passages in the book extolling the ancient architecture of the Valley also prod us to see them in a new light, as structures and heritages carrying a deeper significance than is apparent at first sight. As Niels Gutschow, architect and pre-eminent researcher of the Valley’s heritage, says:

Urban space remains a flat dimension if merely visually perceived, and not enlightened by imagination. Cities become inhospitable the more they lack in an imaginary context. Other people, like the Newars, have illuminated their townscapes with “supernatural lights”. Presumably, these lights will not shine anymore in cities of the future. It is up to us to seek new dimensions in the twilight.

Perched on a sacred hill, away from the hubbub of Bhaktapur, the Changu Narayan Temple was more than a holy building; it was a repository of culture. Although the 2015 earthquake razed it to the ground, it still remains an incomparable source of the valley’s history and culture. It will be a while before the temple stands again (it is being rebuilt) but in the meantime, we have Jeff Lidke’s exhaustive book to inform us about the temple’s importance.

Having stopped to digest [the temple’s] towering central shrine whose pinnacle extends some thirty feet into the blue sky, the eyes begin to scan the periphery. This is a historic wonderland. The stone-laid courtyard is studded with sculptures and inscriptions dating back to the fifth century A.D. There are over twenty stone sculptures of the gods Krishna, Avalokiteshvara, Vaikuntha, Narasimha, Bhairava, Vamana, and Narayana; eight encircling shrines to the deities Chinnamasta, Krishna, Lakshmi-Narayana, Shiva, and Ganesha.

This enumeration of the shrines causes a pang of loss when one remembers the recent earthquake. But Lidke in one of the best books about Kathmandu points out that the temple transcends the physical sphere:

On this site the Nepalese tradition is alive. In the transcultural language of artistic beauty, it speaks to you from every image and every shrine. Here the world of the gods comes crashing into the human sphere. The medium is sculpted form. Through architectural and sculptural forms the Nepalese artists have created a structure which sends the mind soaring upwards into metaphysical thought. Changu Narayan has endured nearly two thousand years of earthquakes, fires and cultural change. Its outer structure has been levelled numerous times, yet each time it has been rebuilt. Here, expressed in a unique and ancient architectural form, is the enduring spirit of the Nepalese religion.

Excerpts like these make this get placed among one of the best books about Kathmandu and appear an out-and-out academic work. But the book is delightfully informative, whether elucidating the architectural plan of the temple or ruminating on why the central image is headless. With the temple as a pivot, Lidke delves into other religious and cultural facts of the Valley: the reason why the Pashupatinath Temple allows entry to Buddhists on one given day annually; how ancient temple designs were imitations of trees, mountains and lakes; the purpose of false windows on temples; pot-colouring, pot-breaking and rice-feeding ceremonies.