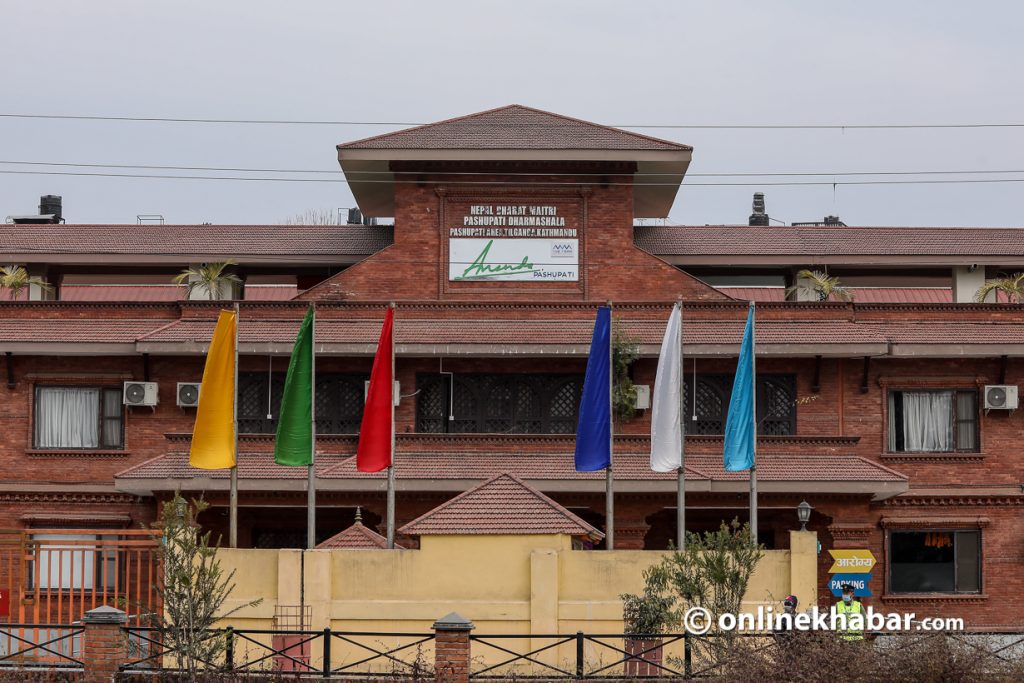 Batas Orgazation had been operating Hotel Anand in the premises of a dharmashala built by India.

In order to cater to pilgrims that come to the Pashupatinath temple in Kathmandu, the government of India in 2018 built a dharmashala near the temple premise. The objective of the dharmashala was to house the pilgrims who could not afford expensive hotels. But, three years down the line, the dharmashala has ended up in the hands of one of the biggest corporate houses in the country.

Batas Organization has been operating a hotel at the dharmashala, charging pilgrims up to Rs 7,000 per night. That is not it, the organisation has also set up a private office along with a showroom of vintage cars.

How did this happen? Sources say the organisation in collusion with the Pashupati Area Development Trust leased the 88-room dharmashala. At the forefront of this collusion was the trust’s then member-secretary Pradip Dhakal who leased the property to the group. Since then, the organisation has been managing the dharmashala, which should have been a social enterprise for pilgrims, as a business.

The dharmashala is spread across 9,000 square metres and it cost Rs 340 million to build. The organisation has been paying the trust Rs 878,416 a month to operate Hotel Ananda there. This deal was made in May 2019. But, the trust’s officials say this was not put forward before the trust’s board. They say the member-secretary cannot be making these decisions alone as their rules do not allow them to do so.

The trust’s rulebook states such a long-term decision can only be taken by the board which is chaired by the minister for culture and tourism.

But, then member-secretary Dhakal took the decision going against the trust’s rules and signed an agreement with Batas Organization illegally.

Dhakal did issue a call for an expression of interest on February 12, 2019, in which he had asked companies that had spent at least Rs 30 million in CSR activities. Many had felt that such a condition was quite irrelevant.

Four organisations submitted their bid, but three of them were deemed ineligible as the trust says it did not receive proof of them spending Rs 30 million in CSR activities. These three had bid more than Batas Organization’s amount. But with all three ineligible, the lease was handed over to Batas by default where it would operate Hotel Ananda for 15 years and pay the trust Rs 10.5 million a year as rent. The company has not been paying rent on time, yet the trust has taken no action against the organisation, says a report prepared by the auditor general.

Signing the agreement, the organisation had talked about converting the dharmashala into a premium accommodation. This is written in the leasing procedure which has not been accepted by the trust yet. But, the organisation has already been operating a hotel there for the past two and a half years.

A member of the trust’s working committee says Dhakal, disregarding all the procedural requirements, gave Batas permission to operate the hotel.

No use for the pilgrims

Ideally, a dharmashala is a resting place for pilgrims who cannot afford expensive hotels. Hence, a lot of dharmashalas in Nepal and India do not charge money as people often leave behind whatever they can. But, here, the case is different as room rates are comparable to some of Kathmandu’s best hotels.

Hotel Ananda has four types of rooms. The cheapest is the dormitory where a pilgrim has to pay Rs 435 per night. Each of these dormitories have around 10 beds. A non-AC room is priced at Rs 1,240 per night while the deluxe room and suite are priced at Rs 3,600 and Rs 6,836 respectively. So, it is safe to say this place built for pilgrims is beyond their budget.

As a lot of Indians come to Pashupatinath, Modi decided to help them by creating a dharmashala near the temple. The trust had even decided to charge nothing from pilgrims for staying there.

But, that agreement was forgotten by the board which gave the entire dharmashala to a business.

The place is not just a hotel. Batas Organization is using the premises for some of its offices as well. The place is home to a vintage car showroom and Batas Foundation. Some rooms have also been rented out to Kafle Lawyers and Associates and a new structure is being made to the right of the building.

This goes against the agreement made with the Pashupati Area Development Trust that states the area cannot be used for any other purposes besides the dharmashala.

According to a member of the trust, complaints have been filed at the Commission for the Investigation of Abuse of Authority (CIAA) and the National Vigilance Centre. But, action has not been taken against Batas yet.

“These people have links with all the powerful politicians and leaders. No wonder they have been able to do this. They’ve made the temple a place to do business and it’s disgusting,” says the trust member on the condition of anonymity.

The member says that the reason why action has not been taken is that Arzu Rana Deuba, Prime Minister Sher Bahadur Deuba’s wife, is one of the advisors of the Batas Foundation.

“The new member-secretary of the Pashupati Area Development Trust was also appointed on the foundation’s recommendation,” he says.

Most of the trust’s members have turned a blind eye to this. The trust’s executive director Ghanashyam Khatiwada says, “I don’t know much about the issue. You’ll have to speak to someone else.”

Dinesh Kumar Dangol, the ward number 8 chair of the Kathmandu metropolitan city, accuses Batas of turning a dharmashala into a four-star hotel.

“They have turned a holy place into a business den. They’ve added a lift into the building and built other permanent structures too. But, they didn’t come and asked for our permission once,” says Dangol.