At the heart of the metropolis, this Chitwan school is running miserably The Rastriya Basic School in Bharatpur of Chitwan does not have a building to teach nursery students.

A government school in the Bharatpur metropolitan city, the district headquarters of Chitwan in southern Nepal, has been teaching dozens of nursery students forcing them to sit on the floor for years.

The Rastriya Basic School administration says it does not have sufficient rooms for the lower-grade kids. “That is why, the students who come in clean clothes in the morning go back home covered in dust in the afternoon,” informs the school principal Dhir Bahadur Thapa.

The school located in ward number 4 of the metropolitan city has over 200 students in total. The school building was constructed in the late 1960s, and it is already in a dilapidated state now. The plaster on the ceiling has begun to flake off and the walls have several cracks. “The teachers and students always fear if the flakes hit and injure them,” Thapa says.

The school has classes up to the seventh grade, but the government has allocated only three teachers. The school has recruited four others on its own, but paying them has been very difficult, complaints the principal.

The school management committee chairman and local community leader Tikaram Sapkota says the school has been collecting low fees from students and donations from good Samaritans to pay these additional teachers. “But, the payment is peanuts. I feel sad that we have requested them to support us.”

“The city government did not support us in reconstructing this old building probably because we did not have access to powerful politicians. We could not intimidate the city officials,” he laments.

Lawmaker Bijaya Subedi who represents this constituency to the Bagmati Provincial Assembly also thinks the school’s miserable condition is a result of the distribution of the development budget on the basis of political access and lobbying, not the need.

He says the city government should prioritise such schools over other development projects.

Subedi informs he has made efforts to allocate Rs 650,000 to construct a two-room building for the school under the President Educational Reform Programme.

Mahendra Paudel, the chief of the education division of the Bharatpur metropolitan city, says the local government is also aware of the problem, adding an amount will be allocated in the annual budget plan next year.

Just around 200 metres away from the school lies a Navadurga temple that frequently receives donations in different amounts from the locals. But, they rarely visit the school.

“Here live big politicians and social workers. But, a very few of them have thought about saving this school,” Sapkota says, “They are ready give as much money as the temple needs for its beautification, but they are reluctant to help this temple of education.”

Sapkota, nonetheless, says he has been working hard to improve the condition of this school.

“Over 60 members of my family have studied in this school over the decades. But, its condition is miserable now,” he says, “That is why I came here to lead when it did not look like a school, but it is improving now.”

After Sapkota taking over, a barbed fence has been made around the school and new drinking water facilities and toilet have been constructed. Likewise, the school has launched English-medium classes, he says.

Consequently, 53 students from a nearby private school have joined this school recently. 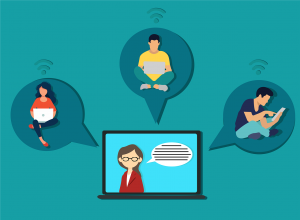