Seven persons have injured including one critically when an improvised explosive device went off at the District Land Revenue Office in Siraha of southeastern Nepal.

No one has claimed responsibility for the attack, but the police say they found some leaflets issued by an armed underground outfit led by Jaya Krishna Goit. Therefore, the investigators have suspected the group’s role in the crime.

DSP Shaligram Sharma says the injured are undergoing treatment at the Saptarishi Hospital in Lahan. 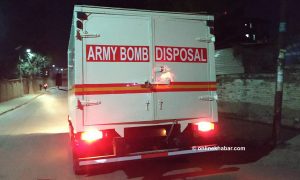