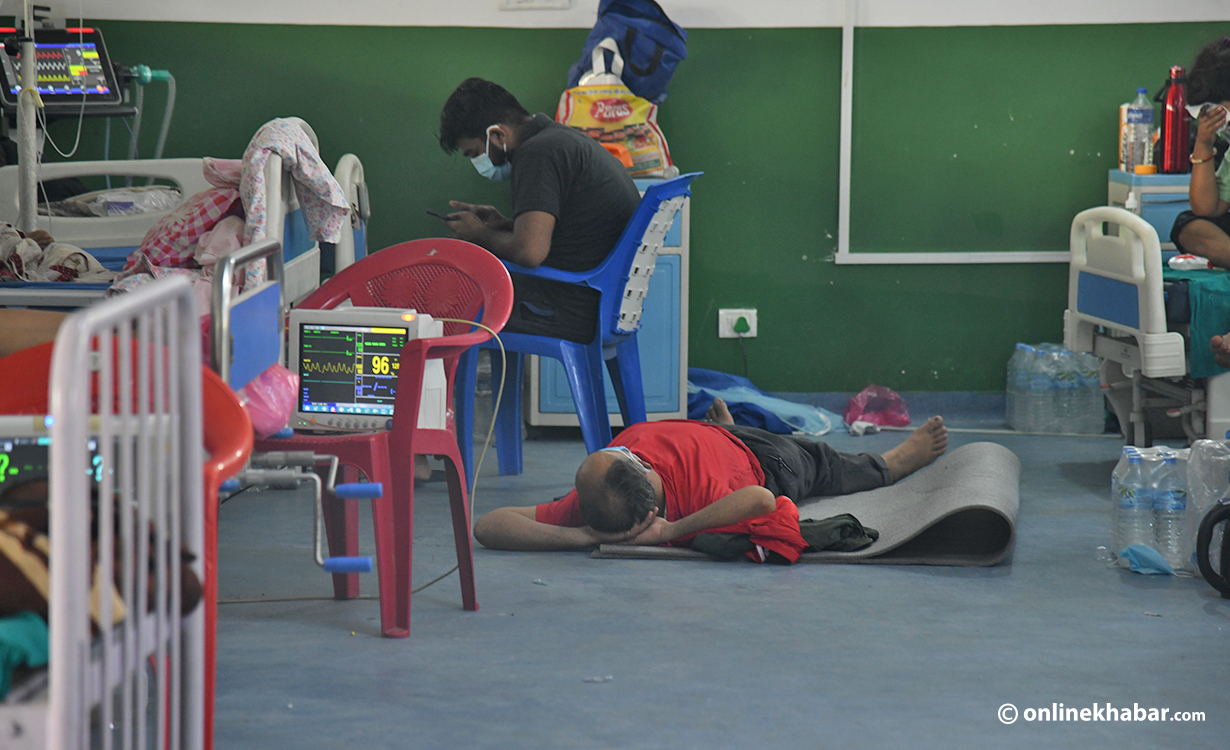 Covid-19 patients have to make do on the floor due to lack of beds at Bheri Zonal Hospital. Photo: Chandra Bahadur Ale

At the intensive care unit (ICU) of Bheri Zonal Hospital, a man in his early twenties is fighting for his life. On oxygen support, the boy, restless, is using all the energy he has got to survive.

Beside him, his mother is praying and reminding him how much she loves him and wants him to live. She knows that her boy is critical and it is going to take a miracle to get better. But, for now, she is clinging to hope, along with support from the doctors.

There are 18 critically ill Covid-19 patients at the ICU of Bheri Zonal Hospital. On April 24, six people died in the hospital and since then, over 30 have succumbed. On Thursday alone, by 10am, five people lost their lives to Covid-19.

At the ICU of the hospital, each patient has their loved one beside them, caring for them. Some are rubbing their back, helping them to breathe, while some are waving fans at them trying to give them some respite from the heat. One person is rubbing the ill’s hands to keep them awake. But, no one is sure if their hopes materialise.

Outside, it is even distressing. People, with oxygen cylinders beside them, are in just a bad state. Everyone is waiting for a bed to be empty. People who cannot live without oxygen support have been adjusted in other wards while some, whose health conditions are vastly deteriorated, have had to be sent elsewhere.

New Covid-19 patients are brought in, in dozens, every day.

A boy is heard on the phone telling how his mother was in so much distresses that he thought she would die as a search for a bed at another hospital looked to be unsuccessful.

The doctors are also in a fix. Understaffed, their ICU is already full and other wards do not have facilities that an ICU has.

A few minutes later, one person starts to get fidgety and starts to behave as if he is going to get a seizure, scaring others.  They had a resigned look on their face as they knew his health was getting worse.

“Covid has gotten out of hand, yet no one cares. Expecting anything from the government is stupidity,” a guy is heard yelling at the hospital.

A patient, quivering, waits for some doctors to see him. His family members even agitated due to that. But, the lack of doctors at the hospital is creating a hard time for all.

“Who would have thought that the situation would get so dire,” says the person who came along with him.

A doctor approaches them and tells them that they can give the patient oxygen, but they will have to make do on the floor.

The family, grateful for the doctor’s help, took the patient to the ICU.

The hospital can accommodate 142 Covid-19 patients, but currently, there are over 200. Wards for other patients are also being used to treat those suffering from Covid-19. But, due to the high number of ill people in the hospital, the doctors and nurses cannot attend to all. Some suffer so much that they die without even being attended to.

There are 39 nurses at the hospital. Out of them, nearly a dozen have contracted Covid-19. The rest are deployed in three shifts. Sometimes, there are only five nurses to look after over 200 patients. The hospital has only one anesthesiologist.

“We could do better if we had more people. We need all the help we can get,” says the hospital’s doctor Rajan Pandey. “The virus is going to do some damage.”

Impact on the ill

This has resulted in the people looking after the patients being alert at all times. Santosh Thapa, who is staying at the hospital taking care of his wife says that many die within hours of being brought to the hospital. With only four doctors on duty at the hospital, the situation, according to Thapa is dire.

“From what I’ve observed, patients who are kept at the ICU for over a week are the only ones who have a chance to survive. Even they need to be lucky,” he says.

More problems arise during the night when people are asleep. Both the people caring for their family member and nurses are not awake and most patients die without being attended to, say the patients’ family members.

Thapa was lucky when he woke up one night to see his wife struggling to breathe. Instantly, he called the nurse and was able to save her.

“If I hadn’t gotten up, she would be dead,” says Thapa.

Dr Pandey says that 80 per cent of the patients brought in for contracting Covid-19 are seriously ill. Last year, only 20 per cent of Covid-19 patients were in such dire conditions.

But despite the lack of human resource and beds, doctors and nurses persevere. “People who don’t come here and see the reality for themselves will never understand what we are going through. What we saw in the West is exactly what’s happening here and it’s only going to get worse,” says Dr Pandey.

The numbers are on a steady rise since April 14 as the Banke district has seen over 50 deaths since then. Those who have not got beds at hospitals are at their respective houses hoping that they do not get too serious.

Before April 14, the HDU ward of the hospital was not in operation as there were hardly any patients. Now, the hospital wishes it had a bigger ward to accommodate everyone.

“Before the pandemic, our ICU had six beds. Now, we have over 142 and we’re still not being able to cope,” says Dr Pandey.

He says that even though they are working 24 hours, they still cannot attend to all the patients in the hospital.

With the hospital calling for help, the Health Ministry on April 26 sent around 80 health workers to the hospital to help them cope with the virus. In addition, applications have been called to fill the vacancies.