Of late, a strawberry farm has been a point of attraction at Rajgadh village in Baarhadashi rural municipality in Jhapa district of eastern Nepal. Hundreds of people visit this farm daily, taking photos and buying strawberries. The farm, in operation since 2018, is owned by the Golyan Group, which has been investing in agriculture in recent years. Though established by a corporate house, the farm has directed benefitted hundreds of members of the local indigenous communities. One has to travel 23 kilometres south of Laxmipur along the East-West Highway to reach Rajgadh, which is still unspoiled by urbanisation. Spread in an area of around 48,000 square metres, the place has recently developed into a tourist destination since the strawberry farm was opened for the public.

“The place is already garnering attention without being publicised,” says Pawan Golyan, the chair of the farm, “We want to develop the farm into a model farm not just for internal tourists but also for foreigners.” 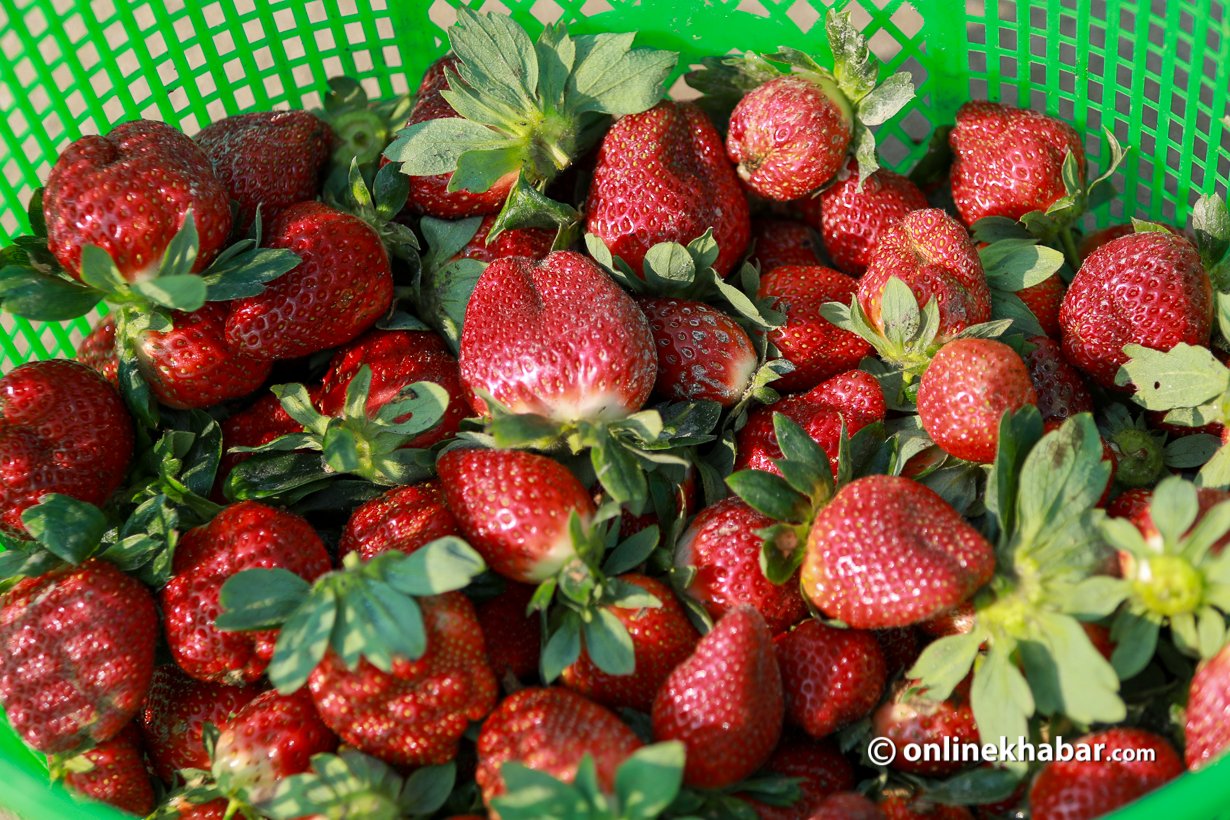 Hundreds of local indigenous people belonging to Santhaal, Majhi and Rajbanshi communities from the nearby settlements have been employed by the strawberry farm. Each of them earns at least 15,000 rupees a month. They are happy with the newly-found means of living.

There are many young women, aged around 18 to 21, working on the farm. Many of these women had stopped going to school, but now are happy that they are getting an opportunity to work in their own village. “My family had no proper earnings,” says Menuka Rajbanshi, “Otherwise we would not have left school.”

Yasodha Majhi, 27, a mother of three, also works on the farm. Having born in India, she was married to her husband who works as a mason a decade ago. With a low income from masonry, it was hard for the couple to sustain daily life. But since Yasodha started working on the strawberry farm, the situation of her family is changing. She is paid 500 rupees a day if she works for eight hours. Ganita Rajbanshi used to work as a tailor before working on the farm. Like Yasodha, Ganita too is satisfied with the work. Maidi Mardi, 20, has a similar feeling as her earning is enough to sustain the life of her family, which includes her father and her younger siblings. She said that her earning is sufficient for the schooling of the siblings.

Like these women, a similar number of male workers are also engaged in strawberry cultivation. They earn a hundred rupees more than their female counterparts in daily wages.

Raj Kumar Majhi of Digalibari used to work as a construction labourer before joining the farm six months ago, “I did not get to work regularly in my previous job.” His colleague Dev Kumar Rajbanshi used to drive tractors before to earn but now is busy in the strawberry farm. Man Bahadur Thapa, a staffer on the farm, has no time to relax when selling the strawberries. He sells around 20 kilograms of strawberries every day. The more the sale, the more the farm benefits the locals, he happily shares.