Twelve years back, the trio of Deep Shamsher Rana, Sunny Mahat and Sanjeev BK, popularly known as Jimi Blues, encountered each other. They decided to jam up because they had a similar interest in music. Later, they chose to form a band and named it The Midnight Riders (TMR). The band was formed just for fun, but as time passed, they started taking it seriously.

The band then played various genres from 70s pop to rock and many others. But lastly, they decided to rest on blues-rock (or postmodern blues) as it was something that the band members associated themselves with. Its sound pleased them musically.

However, in the context of Nepal, there are relatively very few crowds who listen to such music. Yet, this is not an issue for The Midnight Riders. The band love what they are playing, so they have been continuing it for the last decade.

Blues in every sound

Sunny Mahat, the bassist of The Midnight Riders, says the band are okay with whatever they are doing. “Since there is a very small market of blues music and since very few people understand such a kind of music, there are only a handful of blues artists. But, not everyone needs to listen to all types of music.”

He also says that the taste of music changes in every generation. “In the context of Nepal, till now, there is no generation that only listens to blues music, but hopefully in the future things will change.”

Similarly, Jimi Blues, the vocalist and guitarist of the band, also presents his arguments behind the existence of a few blues artists. He says, “The ones who earlier played blues music could not continue it for long and they were replaced by other artists with different styles of music.”

However, as of late, according to The Midnight Riders, their listeners are increasing gradually. If you go to any pubs in Thamel, you can see the audiences of various ages enjoying the blues-based music, adds Jimi Blues.

“Blues is the kind of genre that every other genre pursues in their music. The element of blues can be heard in a lot of popular music of recent days,” says Mahat. “Music like rock and roll and blues never go out of its style.”

The Midnight Riders believe today’s listeners are more musically mature, which is also one of the major reasons behind the increase in the number of their listeners.

The craze of blues music has even dispersed outside the Kathmandu valley.

“Surprisingly, the audience of blues bands outside the Kathmandu valley has a better quality.  The sense of respect they give to our music is commendable,” says Mahat.

The band have found their followers from far-flung areas and other countries as well. Hence, they are hopeful about the revival of blues music in Nepal.

“Nepal mostly remains backwards in following the global trends.  Globally, in many parts of the world, people have started teaching blues music to their children. Likewise, in those countries, the blues bands have started making space in mainstream music as well.”

The global trend in music has made the band optimistic, say the members.

The band with a current line-up of Jimi Blues on vocals and guitar, Sunny Mahat on bass guitar and Jay Ram Karki on drums are celebrating their 12th anniversary on Tuesday.

In a couple of months, the band are coming up with their second album, which is now in the post-production phase. According to the band, the album sounds heavier than their debut album Baiguni Lai Blues Le Marnu Parchha released in 2019.

“This time, we have given extra effort to production work, ”says Mahat. Adding, “The album is also an improved version of The Midnight Riders.”

This time, the album includes songs that feature the heavy and funky sides of blues music and many more.

“The lyrics, composition and music are very different this time, ” says Karki.  “However, we haven’t named the album yet.”

The album is being recorded and produced by Satish Sthapit. The band consider Sthapit as their backbone, adding the album would be impossible without his support. 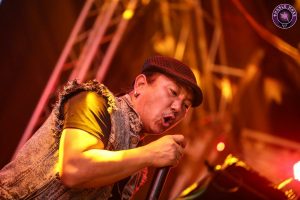