The survey looked easy on paper. All they had to do was to go the Babai Valley in western Nepal and fly a drone (or unmanned aerial vehicle, UAV) along a river. But wildlife researchers Gokarna Jung Thapa, Eric Wikramanayake and Suraj Karki soon realized that their work was fraught with elephantine challenges.

“Our mission was to fly a drone over the Babai and take photos of gharials (Gavialis gangeticus) basking on the banks of the river,” said Thapa, who along with his team visited the valley in January last year. The wild elephants did not like the idea.

“Our vehicle was chased by a herd of wild elephants,” he said. “We had to speed uphill and request a truck-load of soldiers to rescue us that day.” Despite the rescue call, the resources Thapa and his team members used on their mission to count gharials were minimal compared to similar missions in the past.

“In the past, enumerators, in around five groups of five, would walk long distances on the banks of the Babai to count this critically endangered species,” Thapa recalled. “We had to pay for not only their training, but also for their travel and accommodation. But now, we have shown that a three-member member team can carry out the field work with the help of a drone.”

It all began in early 2017 when Thapa, who works for WWF-Nepal, was looking for ways to put to use an FPV Raptor drone procured by his office. The drone was initially bought to assist army units patrolling the national parks. However, due to frequent change in personnel and lack of adequate training, the drone was not being put to optimum use. “That was when I came up with the idea to count gharials using the drone,” Thapa said.

There were three reasons why Thapa and his colleagues selected the species. “First, the gharials are critically endangered—they are limited to Nepal and India and less than 200 breeding adults survive in the wild mainly due to rampant fishing, changes in river flow and increase in poaching,” Thapa said. “Second, they are sedentary and like to bask in the sun.”

The third reason they liked the idea of a drone survey was that gharials form long lines along the banks of the river. This forced enumerators in earlier counts to cover long distances, but if they went too close, the animals would retreat into the water.

The researchers knew they could not just walk in with their drone any time of the year. Researcher Kanchan Thapa, a co-author of the paper, says that for a species like the freshwater gharials, winter (January and February) is the best time to conduct aerial surveys. “This is the time when the water in the river is less turbid and gharials swimming above or below around 1 meter from the surface of the water can also be counted,” said Kanchan Thapa. “We chose mornings (0800–1100) and evenings (1500–1700) to capture the photographs, as these are the basking times for crocodiles,” he explained.

The researchers flew the drone at a speed of 10–12 meters (33–39 feet) per second, along 12 pre-designed missions for 2.72 hours of flight time covering a total of 102 kilometers (63 miles) of riverbank habitat along the Babai, which flows through the Bardia National Park. The camera on board the drone took 11,799 photographs covering an effective surface area of 8.2 square kilometers (3.2 square miles) of the river bank.

“With drones flying at an altitude of 80m [262 ft], the gharials didn’t even notice that they were being photographed,” Gokarna Jung Thapa said.

The trio could get so engrossed in the aerial survey that they often lost track of what was going on in their surroundings. “When we carry out gharial counts, we generally have groups of enumerators working together,” Gokarna Jung Thapa said. “When animals see a group of people, they try to stay away. But when they see only a few people, they don’t hesitate to attack.”

This was one of the main challenges of the fieldwork. However, the area they were surveying lies inside a valley, so they could not fly the drone from a higher altitude, where there is less risk of wild animals.

“If we flew the drone from a higher altitude, there was a risk that it would get entangled in the bushes and we would also lose sight of it,” Gokarna Jung Thapa said. “The telemetry range of the drone is also limited.”

“The other problem we faced was when landing the UAV,” he added. “We found out that it is ideal to land the drone on grass, but there were times when we had to land it on the sand, and it took a toll on its wings. We also found out that fixed-wing UAV’s like the ones we used were suitable for longer missions like ours, and the quadcopters were more suitable for shorter missions to observe a small number of animals.”

Once their fieldwork finished at the end of February, they began to analyze the images. This was the most difficult part of the whole endeavor, said Kanchan Thapa. Gokarna Jung Thapa and his team assembled the photographs and carefully searched for the presence of gharials and mugger crocodiles (Crocodylus palustris), a species that shares its habitat with gharials. They selected 7,708 photographs (66 percent) of the 11,799 for stitching.

“The shape and length of the snout is a feature that can used to differentiate between gharials and muggers. Gharials have a long and slender snout, while muggers have a short snout,” said Gokarna Jung Thapa. “Because the whole idea of the endeavor was to verify already available census data, we focused only on gharials, as muggers have not been counted in the recent past.”

As they flew the UAV at an altitude of 80m, the researchers could not only count the number of gharials and muggers, it could also distinguish between the sexes. “We could have also estimated the approximate age of each individual gharial, but that was beyond the scope of our project,” said Gokarna Jung Thapa.

The images approved by the analysts were then screened using counting software (Dynamic Venture, Inc.). Three image analysts then separately searched for crocodilians in each of the stitched photographs. “Collectively, there was consensus with a total of 64 crocodiles counted (33 gharials and 31 muggers), irrespective of age groups, and they were found spatially distributed in clusters along the Babai river bank,” wrote the authors in their paper.

“We compared the UAV-derived count data with data from three replications collected from conventional gharial surveys conducted in 2016. We also compared the gharial count data with data collected over multiple temporal surveys carried out in the winter season at different time frames employing visual encounter surveys,” said the authors. The figures were found to be similar.

Gokarna Jung Thapa is content that the study has shown that UAVs can be used to count freshwater species such as gharials. Kanchan Thapa believes that the same methodology could be used to count and monitor the endangered greater one-horned rhinos and other species that move slowly in the wild.

“Our objective was to show it could be done, and we achieved it,” Gokarna Jung Thapa said. “We are now in touch with companies working on AI to speed up image processing and are also looking for thermal cameras to make the count more accurate,” he added. “With UAV counts, regular and periodic monitoring of endangered species is possible, and this enables us to carry out conservation interventions with as little lag time as possible.”

Gokarna Jung Thapa said he wants to conduct a similar count in Chitwan National Park in central Nepal. Before that, he hopes to figure out a way to keep the elephants at bay. 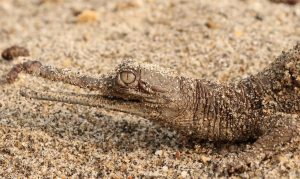 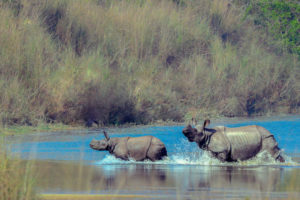 Nepal, in a bid to create a new rhino population, pauses to take stock 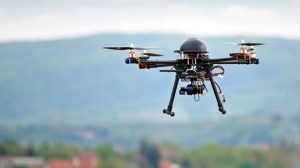