ANFA is continuing its training despite 10 players leaving the camp, in April 2022. Photo: ANFA

Fuelling the ongoing controversy in Nepal football, head coach Abdullah Al Mutairi has called 14 new players to the closed camp to replace 10 senior players who had left the camp.

Earlier this week, 10 senior members of the Nepal national team had left the camp accusing Al Mutairi of ill-treatment. Organising a press meet on Thursday, the players had said it would be difficult for them to return to the team unless Al Mutairi was there as the coach.

Whereas the Nepal football governing body, All Nepal Football Association (ANFA), is yet to state anything officially about the controversy, pictures posted on its social media show the new players. 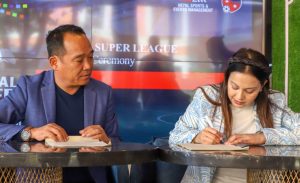