In the span of a month, a house in Kilagal that has been in existence for over 100 years is gaining a lot of attention. The house reported is the family house of the Nepali iconic singer and composer Narayan Gopal [Gurubacharya / Guruwacharya]. Activists, locals and media, all are talking about the dilapidated situation of the house and expressing concerns that the house of the Swar Samrat is now on the brink of collapse. While the common people have expressed concerns, the late singer’s family says it is “false” attention, in which their views have been ignored.

Those who are raising voices for the house to be saved want to turn it into a museum. In fact, some local authorities had already launched an initiative for this also. But, the miscommunication with the family is what has blocked the process.

Here, we explain what happened.

What has been reported?

Nepal Academy acquired Mahakavi Laxmi Prasad Devkota’s house in December 2019 with the motive to reconstruct the house and establish a museum in his name. The academy, in August 2021, started the demolition of the house. But, the feat met with a lot of controversies, questioning their intent, and the matter reached the Supreme Court.

In the meantime, on June 19, a video was posted about Narayan Gopal’s house. Amid the controversies of Devkota’s house demolition, the attention shifted towards the Narayan Gopal’s house, because of the video. Then, others joined in and started expressing concerns and said there is a need to preserve the house. Locals were interviewed; the house was captured in cameras by many and a kind of pressure surged that even reached the concerned parties including the family, the local government and the Department of Archaeology.

So, what really happened then? Is the house really of Narayan Gopal’s or was the buzz false?

Laxman Gopal Gurubacharya, the youngest brother of the Swar Samrat, says no. “The house is where Narayan Gopal spent his childhood and almost half his life. It is the house of his parents Aasha Gopal and Rama Devi Gurubacharya, And, he had partial ownership of the house. But, and I stress, this is not Narayan Gopal’s house.”

He further clarifies, “The house was registered with the name of our father. When our father passed away in 1978, the ownership of that house was transferred to eight of our family members: our mother, six brothers [including Narayan Gopal] and our eldest sister, Uma Devi.”

“[Narayan Gopal] dai had already moved out of the house, after marriage. This was around 1970. He got his part of the ancestral property, like all of us. Together, with Pemala bhauju [his sister-in-law or Narayan Gopal’s wife], he then built their house in Maharajgunj,” Laxman Gopal says, “In 1990 when dai passed away his part of the property was transferred to Manahor Gopal dai as he was the one lit Narayan Gopal’s funeral pyre. So, then and there, legally, the house was no longer in the name of Narayan Gopal.”

Also, the news making rounds claim the house to be where Narayan Gopal was born. But here too, Laxman Gopal claims that Narayan Gopal was born in Bhagwanpur of Siraha during their father’s posting there and not in the debated Kilagal-based house. Further adding, the claims of ‘Narayan Gopal’s janma ghar’ (or, birth house) are moot.

Because of this, Laxman Gopal says he strongly condemns those who claim the house is of Narayan Gopal. But, the news and interest of people in the house have not died down. “People are posting about the house, but that is my personal property now. If anyone wants to claim it, it would be illegal now,” he says, “If anyone wants to claim it as Narayan Gopal’s, I would ask them to first inquire about his actual, legal property that is in Maharajgunj and then come to me.”

Last fiscal year, Kathmandu metropolitan city ward 18 chair Nhuchhe Kaji Maharjan and his team wanted to honour the iconic singer. For that, they reached Laxman Gopal proposing that they convert the house into a museum dedicated to Narayan Gopal.

Upon hearing the proposal, Laxman Gopal was eager to help. He says, “The proposal was interesting to me. We all (siblings) have moved out of the house and, presently, it is being rented out. So, I was hopeful the proposal would pass. But, I had one condition.”

“The ward wanted to dedicate the museum to Narayan Gopal. However, I told them they had my consent only if the museum would say ‘late Aasha Gopal and late Rama Devi Gurubacharya’s son Narayan Gopal’.”

Maharjan adds, “Yes, the plan was to renovate the house into a museum. We even had a budget in place. But, legally, it was made clear to us that a government body cannot acquire any personal property. Hence, we dropped the idea and put a complete stop to it with the end of the fiscal year 2020/21.”

Despite the failure of their proposal, Maharjan informs the ward will at least place a bust of the Swar Samrat, near the roadside. “We have the budget and the plan in place. It will be ready by Narayan Gopal Memorial Day [December 5].”

To build or not to build

Amid the controversies, the question still remains to rebuild the house or not, if yes how and what would be the plan forward.

Following the ward’s decision, Laxman Gopal now wants to move on with his own plans to build a new house for his family.

He is of course aware that people might again point fingers at him, but he clarifies, “This is my property. I should be allowed to do whatever I want to with this. But, if anyone wants to claim or criticise me for that, I want to clarify that I am unable to carry forward with the plan [to turn the house into a museum or conserved site] by myself. Neither do I have the money nor the resources and time to look after it on my own. So I cannot take the responsibility.”

Having said that, he adds, “But if the ward, or the government or even the Narayan Gopal Music Trust wants to initiate and bear the responsibility, I am ready to cooperate and give the space needed for the museum, but again, given that it is after our parents and then my brother [Narayan Gopal].”

But, the trust member Deepak KC, also the chairman of the Kathmandu metropolitan city-3, was unavailable for comment on their interest or lack thereof about Narayan Gopal’s house in Kilagal and whether or not the trust is in favour of making a museum there.

Meanwhile, the house in question and the debate around it has caught the Department of Archaeology’s attention too.

Prakash Khadka, an archaeological officer at the department, who is investigating the matter for the office, says, “The last say would be of the house owners, that means of Laxman Gopal and Manohar Gopal, as it is private property. But since it is over 100 years old, the DoA is there to give them the initial technical support needed to rebuild or retrofit the house to its original glory.”

So what next? No one knows. 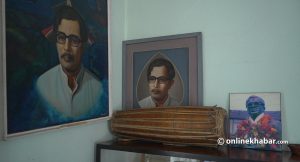 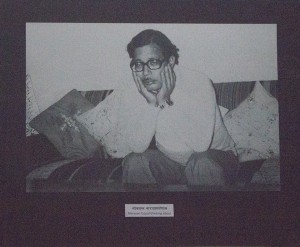