Monkeypox: Should Nepal be concerned? The war against Covid is not over yet, and an outbreak of monkeypox has begun to invoke panic globally. However, unlike with Covid during the early days of 2020, scientists already know much important information regarding monkeypox. So here are things you should know about this viral disease with a focus on how challenging it is for Nepal.

Monkeypox is a rare disease that is transmitted from animals to humans and is caused by infection with the monkeypox virus. Its symptoms are comparable to smallpox but are less severe. While smallpox was eradicated in 1980, monkeypox continues to occur in areas of central and west Africa.

Monkeypox primarily occurs as endemic in Cameroon, the Central African Republic, the Democratic Republic of Congo, Gabon, Ghana, Ivory Coast, Liberia, Nigeria, the Republic of Congo, Sierra Leone, and South Sudan, according to the World Health Organisation (WHO).

What is the monkeypox virus?

Monkeypox virus belongs to the Orthopoxvirus genus, which belongs to the Poxviridae family. The Orthopoxvirus genus includes the variola virus (causes smallpox), vaccinia virus (used in the smallpox vaccine), and cowpox virus. The monkeypox virus is a large, enveloped, brick-shaped virus with a linear, double-stranded DNA genome and enzymes needed for uncoating and replication.

The virus is currently divided into two clades: the more virulent Congo Basin clade (up to 10% mortality) and the less virulent West African clade (up to 1% mortality). The Congo Basin clade was thought to be more transmissible and to have caused more severe diseases in the past. So far, the West African clade has been linked to all confirmed cases in the May 2022 outbreak.

According to the European Centre for Disease Prevention and Control (ECDC), a multi-country outbreak of monkeypox started in early May, with a total of 257 confirmed cases reported worldwide (across 23 countries) as of May 26, 2022, where the disease is not considered endemic. The list can go long owing to the chances of the spread of this virus throughout the globe.

Reservoirs of the virus

How is it transmitted?

The virus is spread when a person comes into contact with the monkeypox virus from an animal, a human, or contaminated objects. The virus enters the body through broken skin, the respiratory tract, or mucous membranes (eyes, nose, or mouth). The animal-to-human transmission can occur by the bite or scratch, direct contact with body fluids or lesions, or indirect contact with lesion material. The principal mode of human-to-human transmission is thought to be large respiratory droplets. Because respiratory droplets can only travel a few feet, it is necessary to maintain extended face-to-face contact. It can be spread through direct contact with body fluids, skin lesions, and internal mucosal surfaces such as the mouth and throat. Curiously, instances of monkeypox have been concentrated in men who have sex with men during the May 2022 outbreak. To date, it is uncertain if the disease may spread specifically through sexual transmission routes; this is still being investigated.

Should Nepal be worried?

The world has witnessed several emerging and re-emerging infectious diseases spread well beyond their previously identified geographic territories whether it be Zika or Ebola. The recent rapid dissemination of SARS-CoV-2 throughout the world is one of the biggest incidents that has happened in human history. The increase in global mobility of humans, nonhuman animals and plants from one corner of the world to the extreme another corner has opened the door for any pathogen to enter any part of the world, and Nepal is not an exception.

Though monkeypox has not been reported in Nepal so far, we should be very conscious of the possibility of its entry into Nepal. The Ministry of Health and Population (MoHP) of Nepal has encouraged the public to be cautious of the disease and take essential health precautions. The ministry must also make a concrete plan and have the necessary infrastructure and tools to diagnose, manage and prevent the disease in Nepal.

What are the signs and symptoms?

Monkeypox is a self-limiting disease that typically resolves within two to four weeks. In humans, the symptoms are similar to but milder than the symptoms of smallpox. The basic difference is that monkeypox causes swollen lymph nodes (lymphadenopathy), but smallpox does not. The incubation period for monkeypox is typically seven to 14 days, but it can range from five to 21 days. The sickness starts with a febrile stage that lasts 1 to 3 days and includes symptoms such as fever, severe headache, lymphadenopathy (swelling of the lymph nodes), back pain, myalgia (muscle ache), and severe asthenia (lack of energy). The febrile stage is followed by the formation of a rash, which usually begins on the face and then spreads to other areas of the body and lasts two to four weeks.

Lesions progress through the following stages before falling off: macules (lesions with a flat base) → papules (raised firm painful lesions) → vesicles (filled with clear fluid) → pustules (filled with pus) → scabs or crusts. In reported cases, the proportion of patients who died ranged from 0% to 11%, with the proportion being higher in young children.

Monkeypox must be distinguished from other disorders such as chickenpox, measles, bacterial skin infections, scabies, syphilis, and medication-related allergies.

How is the disease diagnosed?

The diagnosis can be a challenge since its symptoms are similar to those of many other diseases. The primary laboratory test for monkeypox diagnosis is the detection of virus DNA using polymerase chain reaction (PCR). The best diagnostic specimens are directly from the rash– skin, fluid, or crusts, or biopsy where feasible. Because antigen and antibody detection methods do not distinguish amongst orthopoxviruses, they may not be useful.

The following precautions can be followed to prevent the infection:

According to the WHO, the smallpox vaccine is 85% effective in preventing monkeypox. As a result of the end of routine smallpox vaccination, which provided some cross-protection in the past, populations have become more susceptible to monkeypox.  Despite the fact that smallpox vaccination is no longer regular, members, healthcare workers, and laboratory personnel who were vaccinated against smallpox in childhood may still be protected against monkeypox. The US Food and Drug Administration (FDA) has approved JYNNEOS, a live-attenuated vaccine that protects adults 18 years and older from smallpox and monkeypox infection.

How is it treated?

The disease does not have a specific therapy. Treatment plans are frequently focused on reducing symptoms and making patients as comfortable as possible. Nonetheless, there are a number of antivirals that may be beneficial in the case of monkeypox.

In the absence of particular therapy, many people infected with the virus experience a mild, self-limiting disease course. The prognosis for monkeypox, on the other hand, is determined by several factors, including previous vaccination history, initial health status, concurrent illnesses, and comorbidities.

PhD scholar Mishra is an assistant professor at the Department of Microbiology, Tribhuvan University Teaching Hospital, Institute of Medicine.

Yadav is a microbiologist at the National Public Health Laboratory, Department of Health Services, Ministry of Health and Population. 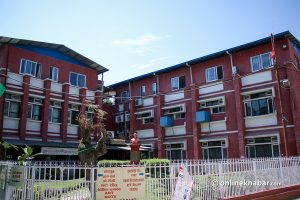