Forests and Environment Minister Pradeep Yadav has urged officials and stakeholders to prepare for upgrading the country’s vehicle emission standard to Euro6/BS6.

However, he is yet to take transport entrepreneurs who have long been protesting the government plan into confidence.

It has been two and a half years since India adopted the BS6 emission standard equivalent to the Euro 6 standard. As India is the source of a majority of vehicles that Nepal imports, stakeholders had expected Nepal would also upgrade to Euro6.

Minister Thapa also insists that it is already too late to upgrade the requirement as India is already ahead.

But, Dhruba Thapa, the president of the NADA Automobiles Association of Nepal, an organisation of auto dealers in Nepal, however, says the government shall provide a preparation period before the jump. Otherwise, it would cause a loss in the country’s economy, he warns, adding it would make everything including household consumables expensive.

Likewise, around 30,000 auto mechanics would lose their jobs once the Euro6 emission standard is introduced, according to the traders.

Until now, Nepal has adopted the Euro3 emission standard that was decided in 2012-13.

A government-commissioned panel has already submitted its report to the Ministry of Forests and Environment, suggesting Nepal needs to upgrade the emission standard, to Euro4 immediately and Euro6 after the needful preparation within the next two years. But, Environment Minister Yadav wants to directly jump to Euro6 as it has been the norm globally. 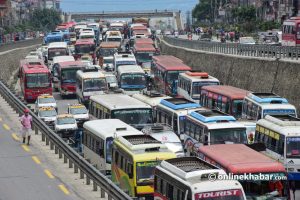 Nepal wants to upgrade the emission standard to Euro6, but traders aren’t ready