At the Center for Molecular Dynamics-Nepal (CMDN) at Thapathali, in one of Nepal’s premier biological research organisations, three women scientists, sharp-eyed and steady-handed, are ardent in meticulous experimentation.

Sulochana Manandhar, Jyoti Joshi and Susmita Bhattarai all come from different backgrounds yet they share a common passion for the biological sciences where complex genetic analyses are part of their everyday forte. All three hold Masters of Science (MSc) credentials to their name and are involved heavily with the organisation’s public health and wildlife research. Moreover, Manandhar is also lab manager, who leads a team of eight other research scientists.

To begin with, all three had early childhood influences of strong values on education. Jyoti is vocal of the massive influence her zestful grandfather had on her upbringing, Sulochana ponders every time how her parents who, though not highly educated, pushed her relentlessly into academics. Susmita knows very well that her father migrated to Kathmandu for the sake of her education. All three agree assertively they have had a conducive environment for academic growth.

On a recent February morning, I started my day reading a recent article by Nobel laureate Dr Elizabeth Blackburn and her chance discovery of the telomerase. It quaintly reminds me of all the stellar women scientists, who have graced amongst us. So what is it that makes these women such competent scientists?

“The need for meticulous and undivided attention to detail makes women very naturally suited to science. Women are thus excellent at surgery or detailed embroidery sewing for example, anything that requires prolonged periods of rigorous focused attention. We are also equally and inherently compassionate about our duties and responsibilities be it at home as mother or daughter or at work as a colleague, this empathy reaches out and veins deeply into the work we do, so the labour of love we put in is evident in the quality of results we produce.”

On an average day, these highly intelligent and laborious scientists at CMDN extract the DNA (Deoxyribonucleic Acid: =Key Unit of Genetics) of at least 10 samples (human or animal), run anywhere over 50 gene amplifications and analyse complex genomic data to compute various scientific conclusions.

Some of this work is critical to human health, including the screening and therapy of HIV and Hepatitis C patients, while some deal straight with Nepal’s wildlife, genetically estimating the population of our highly elusive species, thus assisting conservationists to devise necessary protection action.

“The need for meticulous and undivided attention to detail makes women very naturally suited to science.”

“We are proud that our work is directly or indirectly improving people’s lives and also protecting the state of our fragile wildlife. Once you become self aware of the value your work brings to people and society, it gives you the impetus to challenge tougher times.”

But the status quo of Nepali industries is petrifyingly male dominated. I wondered if the challenges were the same for women in science.

“At CMDN, we have a young organisation with open minds and youthful exuberance. Our work is so mentally demanding and physically rigorous (more than one would know) that we haven’t even thought about gender bias, suggesting that it doesn’t happen here. But also that we would take none of it were it to happen to anyone of us anywhere. Intellectually, we are equals; we are as competent if not more or less to any male colleague and vice-versa. But we don’t think that way, we are here to work and deliver, our work does all our talking.”

Jyoti Joshi and Susmita Bhattarai have been here for less than a year. Both have trained largely overseas and this past year alone have worked on over 500 wildlife samples. The duo alongside senior manager Sulochana are most likely the only women currently in Nepal capable of carrying out complex microsatellite experiments to genetically separate Felid or Canid individuals.

Moreover, they are leading the Nepal side of a regional pilot study on Wolf phylogenetics in collaboration with the Royal Zoological Society of Scotland (RZSS) and Oxford University. The three also screen for highly threatening pathogens along the human-animal disease pathway for a global collaborative (Nepal is an active partner) called PREDICT. Sufficed to say they have done a lot and have much more to do, but in the quintessence of true science and scientific ways, they do this under the radar of overwhelming and glistening attention that surrounds us today.

In a generation where superficial dominates imperiously and intellectual is best at snail speed asserting its way into popular culture, these scientists are not just breaking the stereotype of women professionals but also paving pathways for future aspirant scientists.

“Without passion for your work and self, who are you really? We are proud to be a few selective in Nepal working to do what we love. It is critical for women to go out, work, earn money and show society that we are living financially and socially independent lives against the presumptive status quo. You must chase your dreams persistently like it were the first and last thing on your mind, be a hundred per cent sure this is what you want to do because science is ruthless that way. So explore what you want to do before jumping the gun as you can only really do well in something that you truly deeply love.”

At the end of the day, after a series of client meetings, lab experiments and the occasional coffee breaks, the whole lab discusses the results they have retrieved. I can sense now that this work requires serious devotion and is no child’s play. The three pin down notes for the next day and breathe a sigh of relief only at 5 in the evening.

These Nepali women scientists continue to work under the shadows because science has never been about the grandeur, but maybe the time has come that it should slowly be about it.

Rayamajhi is designing with Nepali roots in Big Apple 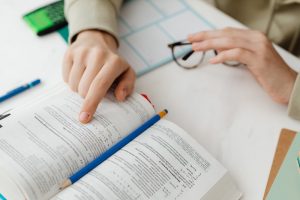