The Lalitpur metropolitan city that has recently marked dedicated cycle lanes along major roads have also planned to make the lanes on both sides of the Kathmandu Ring Road under its jurisdiction.

The city government says it will make cycle lanes along the 7.7 km stretch from Balkumari to Sanepa soon. Currently, works are underway to design the lanes.

Rakesh Maharjan, the general secretary of the Nepal Cycle Society, says his organisation is designing the lanes and the plan will be submitted to the city government in one week.

The society will partner with the municipal government to raise awareness on the importance of cycling, says Maharjan.

“We have found that the city is committed to creating an environment in which the cyclists can travel safely and without interruption. We, hence, are partnering with it,” he says.

Meanwhile, the Department of Road has expressed dissatisfaction with the plan, claiming it might invite more accidents.

“It is not that we are against the plan, but cycle lanes should be marked after improving the road management. It has to be scientific and well-managed,” says the department’s Director-General Arjun Jung Thapa.

Raju Maharjan, the municipal spokesperson, assures that the department will be informed about the plan. 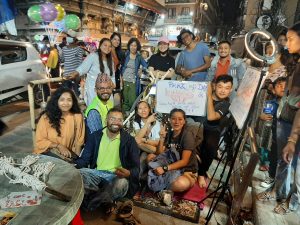