After widespread criticism of its newly released map of India in Nepal, the Survey of India has released another map. However, that too has sparked controversy as it seems to have removed the Kali River, which according to the Treaty of Sughauli is the border of India and Nepal, from the map.

The eighth edition of the map released on November 2 showed the Kali River inside India, and it had sparked controversy in Nepal. However, the ninth edition of the map released this week does not show the river. This comes after a widespread protest throughout Nepal, which has urged politicians calling for India to change the map and take its troops away from Nepali lands.

If old treaties and documents are anything to go by, the Kali, which flows from the Parvati Kunda, is the western border of Nepal with India. Section 5 of the Treaty of Sughauli drafted in 1986 states the same. Garwal Office of India had stated that residents of Nawi, Gunji and Garbyang would have to pay taxes to Nepal. Nepal had even taken the census of these areas in 1961, which shows that these areas are Nepali land.

The government and the Ministry of Foreign Affairs while sending written documents have also mentioned the Kali as the border point between Nepal and India. However, India has not been showing the Kali on its map.

The eighth edition of the map released three weeks ago shows the Kali River, interestingly, on the Indian side. In the 200 years since the Treaty of Sughauli, it is estimated that India has encroached around 372 square kilometres of Nepali land and mentioning the Kali inside India had tried to legitimise it. Now, experts have been saying that the river has been removed from the map to make sure it still has hold of the encroached land.

But the new map released by the survey of India is more dangerous than the one released on November 2, claim experts.

A former Director-General of the Department of Survey, Punya Prasad Oli, says, “They have changed the map a bit after our protest here in Nepal. But the new one is more dangerous. This shows that they will not be returning Nepali land or removing their army from Nepali land any time soon.” 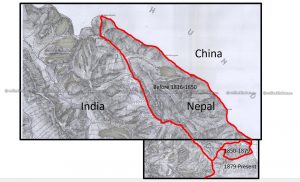