Should GMOs be allowed into Nepal? The recurring debate is unlikely to settle soon In 2020, Nepal imported genetically modified soya beans meal worth almost $27 million from the US. This was quite a shock as the Supreme Court, in 2014, had put a ban on the import of all genetically modified organisms (GMOs) until the government came up with a policy regarding its importation.

Despite that, genetically modified organisms (GMOs) have been coming to Nepal with ease. In the past five years, Nepal has imported over 2,500 metric tons of canola used to produce mustard oil and over 6,000 metric tons of corn, mostly used as fodder for cattle.

While the jury is still out on whether GMOs are good or bad, the importation of these products in Nepal despite the ban by the Supreme Court has been a cause for concern. To curb this, in August, the Plant Quarantine and Pesticide Management Centre under the Ministry of Agriculture and Livestock Development sent letters to all importers to provide a non-GMO certificate while applying for an import permit. But, due to ‘external pressure’, it did not take long for the ban on canola, soya bean and corn to be lifted, making it legal for it to come into Nepal as the centre issued another notice in September.

All these developments have sparked another round of debate on whether Nepal should allow GMOs, but it is unlikely to settle this time also, as experts suggest the country lacks control and research infrastructure to decide their usability and control bad practices.

Is the lifting ban good?

Mahesh Chandra Acharya, a senior officer at the Plant Quarantine and Pesticide Management Centre, says the centre recommended that the ban on these items be lifted because it wanted to regulate the import of such crops.

“The GMOs are entering the country haphazardly without our permission, but we want to regulate it. This was the only way that we could do it as it would require these traders permission from our office to order any of these from abroad,” says Acharya.

While this move has drawn some criticism, Acharya says this had to be done to ensure the authority would find out who exactly is bringing in these GMOs and for what purpose.

“The data suggest a lot of GMO products, especially canola and corn, are coming into the country. But, most of these have come in without our permission. All of this happened behind our back as other government organisations gave permission to the traders to bring such GMOs,” he says.

But, this is dangerous, says Shree Bhagavan Thakur, who specialises in plant breeding. He says that as there is a misperception about GMOs in Nepal, statements like these do not help.

Was the ban effective?

But despite the ban, GMOs have continued to come to Nepal. A source at the Ministry for Agriculture, on the condition of anonymity, tells Onlinekhabar that government bodies like the Department of Food Technology and Quality Control are bypassing Plant Quarantine and Pesticide Management Centre and allowing people to bring in GMOs.

But, Mohan Krishna Maharjan, the information officer at the Department of Food Technology And Quality Control, says it is not true and it has not given permission to bring GMO products.

“We don’t deal with this. Our job is to maintain the safety and quality of food and feed products in the country by implementing updated food and feed acts and regulations,” says Maharjan, who adamantly states his office only monitors processed food and not others.

Even though Acharya from the Plant Quarantine and Pesticide Management Centre does not say that the department has been bypassing them, he does agree GMO imports in Nepal has increased since the 2014 Supreme Court verdict. He says that the major reason this is happening is due to a lack of coordination between government bodies.

It means the country needs better coordination among concerned authorities before the ban is imposed or lifted altogether.

“It would be easy if we’re holding dialogue. But, right now, no one comes to us asking us if permission should be given. They just give it without our consultation,” says Acharya. “Now, we hope that this doesn’t happen and hope we’ll be helped by other government bodies to monitor those who bring GMOs into Nepal.”

Because GMOs are not entirely bad, Nepal should promote, not only import but production also, after due research, according to scientist Thakur.

“But, what we lack in Nepal is research. We could’ve set up plants and done the necessary research, but we haven’t done that. We’ve just said we’ll ban it because it’s not good. But, that ban has not been effective at all,” says Thakur.

Nepal Agricultural Research Council (NARC)’s senior scientist Bal Krishna Joshi who campaigned for the establishment of such plants is quite shocked that the ban has been lifted without the plants being set up. He says he is also quite puzzled why the consumers have not spoken much on the issue as they did in 2014 after which the ban was put in place.

“We submitted a white paper to the government explaining what the GMOs were and what Nepal needed to do to make sure its people weren’t harmed by it,” says Karki. “We wanted to ensure that research plants were set up, but there was no interest from anyone. They banned it and that was that.”

A plant breeding assistant professor at the Institute of Agriculture and Animal Science, Tribhuvan University Ankur Paudel says after the court’s hearing in 2014, most research in GMOs stopped.

“We need to make people aware of what GMOs really are and why they are important in today’s world,” he says. “But that needs to be explained only after due research. We can’t just say it’s good. We need to explain how it is good.”

Thakur says Nepal also needs to experiment with GMOs. He says that relying on foreign companies and countries might be quite dangerous as there are chances that the GMOs will be used in biological warfare.

“What if they send crops which has diseases? We need to start developing these on our own in the long run because the GMOs are the future,” says Thakur.

But, when the country cannot produce the GMOs on its own, he says these will also make Nepal dependent on other countries. This claim is also supported by Acharya who says that as these GMO products are cheap, farmers will stop planting seeds that are indigenous to the region. For example, a kilogram of soya bean meal costs around Rs 60, but soya bean produced by a farmer in Nepal costs over Rs 100.

“If more people find this out, Nepalis will surely start using GMOs, and with that, our farming and farming techniques will end,” he says.

Acharya, who is from Chitwan, says that the production of mustard is quite low in his region in recent years and that is one of the main reasons for the import.

“Canola is cheap and with mustard production low, manufacturers will definitely use canola, but this practise must stop because our indigenous farming knowledge will disappear,” adds Acharya.

This is why it is important to research, says Paudel and follow the model of Europe and mark GMO food as a GMO.

“We need to mark them so that people have a choice. That’s the least we can make people do,” says Paudel.

This is important because many industrialists have been bringing in GMOs stating that they are non-GMOs, and this is quite risky, says Acharya.

“If you go to any mart, you’ll find that a lot of them are byproducts of GMOs. GMOs, in general, aren’t bad because they make the consumables cheap and easy, but testing of these products needs to be done.” 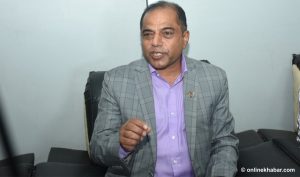