If one were to graph the theatrics in director Hemraj BC’s films, one would get what would resemble a straight line, with small peaks along the way, and one massive peak and valley towards the end. The line would then extend further and neatly form a bow.

BC has never been comfortable with drama and has mostly played out conflicts in his films with a degree of unease– killing off his protagonists in a bid to resolve the story. His debut Hostel glided past its runtime with a sort of boisterous merriment in a bid to capture a youthful exuberance that hardly explored its scope for drama.

His second feature Jerry played out in a similar way–an impish glee overruled the movie until at the end when everything came to a close with the hero’s death. His third film (and the most dramatic one till date) Sambodhan, was a shift from his earlier films. But even with a plot dealing with serial murders and their investigation, the theatrics was not only unyielding, it was unfitting for its hero who was instigated to act for a greater cause.

With Gajalu, BC continues the tradition of his first two films of portraying  the camaraderie between a group of young friends.

In the movie, Aarav (Anmol KC reprising BC’s earlier heroes, who are unable to find a footing, for the third time) is an aspiring filmmaker who meets Sujata (Shristi Shrestha), a former Kumari while shooting for a documentary. Sujata, while unable break into normalcy, holds aspirations that go against her family’s tradition. But when Aarav invites Sujata into his life, complete with a bunch of 20-something friends (one of whom is introduced in scene where he goes down on a girl), tradition is meant to be broken. 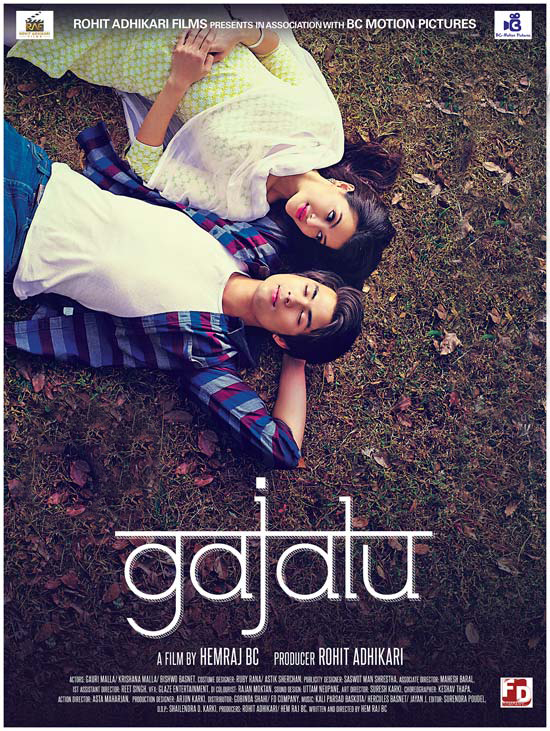 Gajalu holds wells to chart the growth of its heroine from a guarded, inhibited self to a fully-realised woman living under her own terms.

While a crisp editing job and a more refined screenplay might have made the movie better, Gajalu holds wells to chart the growth of its heroine from a guarded, inhibited self to a fully-realised woman living under her own terms.

Debutante Shrestha is commendable in her role. When we hear her speak for the first time, her trembling voice carries the baggage of someone who has had no say in life.

She bites her nail, weighs down her words–all the while holding on to the composure passed on to her as legacy.

In one scene, where Aarav’s sister Prakriti (a feisty Menuka Pradhan) is being proposed for marriage, Shrestha is somewhere in the background. But the scene is more about Sujata’s own aspirations (and she delivers it beautifully) than it is about Prakriti. These two women couldn’t have been more different from each another.

Gajalu works in parts like these. And although let down by a confounding screenplay replete with soapy hearts hidden underneath revelrous air, the films in director BC’s oeuvre are a continuation of one another, of sorts, if you look at the collective growth of his heroes (a la the recurring character of Antoine Doinel in Francois Truffaut’s films).

These are semi-autobiographical undertones or are, perhaps, just a coincidence.

Like Antoine Doinel in Francois Truffaut’s films Aditya (Hostel), Jerry (Jerry) and Aarav (Gajalu) could all be a continuation of one another.

Forget for a moment that the heroes in the films BC and KC have collaborated in (Hostel, Jerry & Gajalu) have three different lead characters, and that they are instead the same member of the Hemraj BC universe where kids revel in the glory of youth and then realise that they have more room to grow or sometimes, not.

If one charts the growth of BC’s heroes as a continuation of one another, you will find the growth to be more pronounced and hence, effective. Gajalu‘s Aarav may very well be a matured Aditya Bikram Rana from Hostel. Similarly, Aditya could very well be playing himself in Jerry but as a young adult who’s left behind the angst he had during his teens in Hostel.

In Gajalu, Aarav’s life is touched by Sujata as much as hers is by Aarav–learning about loss and love as they both grow.

Only a fourth collaboration will tell where this will lead to.