“By the forgotten stream the Wollemia dance. Dreaming of time. Of ancestral time. Of land where their ancestors came from. A land faraway in time. A land of endless time.”

The mysterious giant orb, the planet earth, we live in never ceases to surprise humans, with stranger revelations and startling discoveries.  We are too busy lost in our world; we miss out on a great deal.

When a close American friend, an anthropologist-writer, in one of his recent emails mentioned the discovery made in 1994 of a bizarre species of trees, I was utterly clueless about it. So were my friends in Kathmandu, neighbours, and colleagues, including a forestry guy.

Curious, I dug into the matter. And, the further I probed into it, the deeper I got hooked. It sure would make an absorbing story for the readers, if not intriguing, I thought.

We have heard, read, or watched in movies like Jurassic Park, the prehistoric dinosaurs that once roamed this Blue Planet in the Cretaceous Period (last of the three Mesozoic or the Middle Life Era), even before the Homo sapiens came into existence.  Strangely, alongside those antediluvian creatures, lived and thrived a species of wild trees. Guess what, they survived the constant ravages of time, outstripping the dinosaurs and withstanding natural calamities for all these millenniums to this day—nothing short of a miracle—one of life’s bizarre mysteries.

The story of these mystery trees took birth in the southern hemisphere, or the ‘Unknown South Land, known today as Australia, a land of the Aboriginessteeped in geological contradictions and deep-seated enigmas.

One Saturday in 1994, David Noble, a field officer from the National Parks and Wildlife Service of New South Wales (NSW for short), with two of his avid bushwalker friends, decided to spend his day off, backpacking, rock climbing, and rappelling down rugged canyons of Wollemi National Park, some 200 km northwest of Australia’s largest city, Sydney.

A natural outdoorsman, and a botanist, David was nuts about exploring new and newer gorges, canyons, caves and the like in the vast wilderness of NSW, which were different, unheard-off, and virtually untrodden by others.  Scarcely did David realise the day would rewrite world history.

On abseiling down into one of the narrow rainforest canyons, David stumbled into a small grove of strange species of trees, thriving in the narrow ravine. Let’s hear David’s story in his own words:

“At the time, it was just another weekend canyon trip into the Wollemi Wilderness,” Dave Noble said. “We were looking for new canyons, abseiling down waterfalls to places where no one had been before. The best canyons are narrow, deep, dark, and long. We had completed the descent and sat down for lunch when I noticed a tree that I hadn’t seen before. Without thinking too much, I collected a small leaf sample and put it in my backpack to identify at home.”

“Even though it had quite distinctive features, it proved to be too hard for me to identify. So, I took it into work later in the week and gave it to Wyn Jones, the Senior Naturalist at NPWS in the Blue Mountains. Wyn asked how big the bush was. When I described it like a 40-metre high tree, he said we must visit the site.”(See: https://www.environment.nsw.gov.au/news/iconic-spaces-iconic-species).

It soon led to the finding that the strange species of trees were none other than the prehistoric Wollemi pines that had lived in the epoch when dinosaurs prevailed over the earth.

Long believed by palaeo-botanists to be extinct, and considered as just fossil remains, soon, they were dubbed the “dinosaur tees,” “the Living Fossil Trees,” the “Jurassic Pines,” and Australia’s “Phoenix Trees.” The species got its scientific name, Wollemi nobilis, after David Noble. The discovery spread like a wild bushfire and took the world by storm. “It’s like rediscovering a small dinosaur alive on earth,” some were heard saying.

A modern-day explorer and a passionate adventurer, David Noble, in his career with NSW National Park, had, more or less, explored every inch of the Wollemi wilderness within the park. He was, after the discovery, promoted to Park Ranger.

Categorised as critically endangered by the IUCN Red List, today, only 100-odd numbers of mature adult trees in different stands and 200 to 300 juveniles remain in an area of 10-square kilometres in Wollemi National Park, and the Greater Blue Mountains World Heritage Area, NSW, Australia. Since isolation seemed the primary key to their survival, the NSW National Parks and Wildlife Service has implemented a long-term conservation strategy to protect those pines and discourage public visits to the core area.

Curiously, Wollemi pines do not biologically belong to the pine family. Instead, they are related to conifer family Araucariaceae, evergreen trees bearing cones with spindly branches, bubbly dark bark, and dense, waxy, fern-like, lime-green foliage. They grow as tall as 40m.

They stand out from other species as the “only kind in its genus.” The base of the tree trunk can get as thick as 1.2m. The exact location of the Wollemi pine is still kept shrouded by the NSW Department of Environment and Climate Change to “avoid the possibility of potential pathogen infection, vandalism, and illegal collection.”

To thwart human encroachment and predation, the prime areas are cordoned off to visitors and display signposts that read: Walk No Further. Area Closed, and specifies a fine of AUD $3,300.

It is said the relict species occur in a moist deep gorge ensconced in between Narrabeen Group sandstone cliffs in the Wollemi National Park. What is so baffling about those pines is, contrary to other species of plants that vary in their genes from every single plant to another, Wollemi pines are genetically distinct, and identical, almost giving the impression of being clones.

Botanists maintain that Wollemi pine’s spontaneous self-coppicing or sprouting multiple trunks from their base has made them survive the worst catastrophic disasters. Australia has a long history of natural catastrophes for heatwaves, drought, tropical cyclones, flooding rains, wind storms, and notably summer bushfires. It is but an absolute miracle they have miraculously endured all these years by the millions. 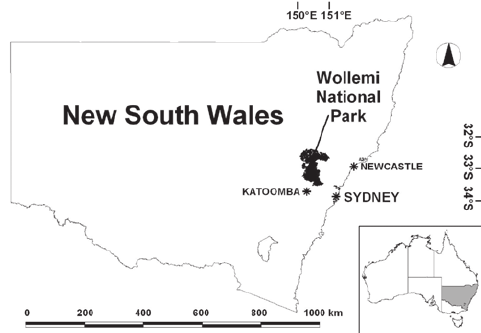 The word ‘Wollemi’ happens to be a native aborigine word, which translates to “look around you, keep your eyes open, and watch out.” Established on December 14, 1979, covering an area of 5,017 km², Wollemi National Park is situated just 130 km north-west of Sydney, Australia.

The deep canyon, where the Wollemi pines, the most iconic amongst others, were discovered, lies virtually in a rugged inaccessible largest wilderness area in the park. The exact location is still said to be a “closely-guarded secret.”

The national park is bounded to the north by the Goulburn River National Park, to the east by the Yengo National Park, and the south by the Blue Mountains National Park. In 2002, the park was listed as a UNESCO World Heritage Site.

The park, open to the public and tourists, houses historic ruins, old disused tunnels, camping sites, and offers abundant opportunities for bushwalking, canyoning, rock climbing, rappelling, and canoeing in the many swamps that abound the park area.

The Colo River inside the park offers exciting kayaking challenges, and the jungle trails are also open to cycling buffs for a thrilling ride through the untamed and pristine environment. For the more intrepid, the opportunity of exploring formidable slot-canyons are infinite within the park area.

The park also provides camping grounds for tents, caravans, or camper trailers, and has built-in self-contained cottages that are fully equipped with kitchens, fireplaces, flush toilets, and all the comforts. To pamper the park visitors, the facilities also include wood barbecue grills.

In the manner of many endangered wild species of trees around the world, the Wollemi pines, despite having survived millenniums, stand critically endangered, today, claim senior phytologists. And, one of the threats includes the bushfires, among others.

As recent as the 2019-2020 massive chain of bushfires, called the Black Summer, which swept across the Australian continent, is still a cruel reminder of the devastation it brought to the nation, burning more than 11 million hectares (110,000 sq. km or 27.2 million acres) of the bush, forest, and parks.

The mega blaze that commenced in the third week of June 2019 continued as late as the second week of January 2020. A billion animals perished, and some endangered species were feared pushed to extinction.

In New South Wales alone, five million hectares of forestland, including some parts of the Wollemi National Park, was struck down by the deadly fire and brought in its wake a great loss of human lives, property, and “silent death” to valuable flora and fauna by the millions.

So did the bushfires threaten to destroy the small grove of fewer than 200 of those “living fossil trees,” the Wollemi pines, in their secret haven in a gorge deep inside the NSW Park.  Leaping flames and billowing waves of impenetrable smoke reaching the sky were reported approaching the site from the Giant Gospers Mountain.

The fire was, however, thwarted as the Australian government in a sweep-operation mobilised the NSW Park officials on time to drop fire retardant in the area and deployed choppers to winch down Alfa firefighters into the ravine to install a hydration system to provide ample moisture to the grove to fight off the scorching heat.

Dinosaur tree in the backyard

The news of the discovery of the “dinosaur trees” triggered a surge of exhilaration and caught the imagination of every single Australian. And, when in March 1999 the news broke out that the Queensland Forestry Research Institutes and Birkdale Nursery were going to commercially propagate Wollemi pine for sale to the public, it created an uproar.

Everyone wished they had the dinosaur tree in their garden, patio, balcony, verandah, and backyard, you name it. Following the news being aired, the first limited release of Wollemi pine, a little over 275 plants, were auctioned for a whopping AUD $3,600 plus.

A key conservation strategy of the Wollemi Pine Recovery Plan of the Australian government was to simultaneously protect the population of these unique plants in the wild and propagate them to ensure that the prehistoric flora also grows in gardens, homes, and parks around the world.

The park curators maintained should the legendary species die someday in the wild, it will live on, leastways to adorn people’s garden and homes—that was the byword for the dendrologists.

Intensive research and development reached a record high when the Wollemi pines were successfully cloned. The cloned offspring turned out as close to perfection as possible that they were auctioned by the American multinational company in New York, Sotheby’s, with the profits going back to support more research into this little-known living fossil tree. “It has given a new perspective to our life on earth,” remarked, Sir David Attenborough.

For most Australians, the historic pine has also become a cherished tree when Christmas is around the corner and they cannot wait to string it with the tinsels and lights to celebrate the occasion.

The Wollemi pines appeared on earth even before the humans did, outlasted the dinosaurs and still live and breathe, latching on to each other as a family in those mysterious gorges of the great wilderness of Australia—“one for all, all for one,” as Alexandre Dumas put it. And, the legacy will outlive us for generations untold to come.

The information, including some images, for the above story was drawn from:

Note from the author: I ran across a website, which said they marketed Wollemi pines, among other exotic plants, in Kathmandu, Nepal. I wrote to them several times to enquire but to no response. I would appreciate receiving from the readers any info on the availability of the Wollemi pines in Kathmandu.