Who started Deusi-Bhailo? Why, when and where?

Every Tihar, you hear such chants in every village and town of Nepal. The Deusi-Bhailo tradition has been an inseparable part of the festival considered the second largest of the nation.

But, only a few people know where and when this tradition began. While listening to these Deusi-Bhailo songs or humming so, many must have wondered who started this folk tradition, who Bali Raja remembered in these chants is, and what his purpose was in beginning the tradition.

Here are some probable answers.

It is said that the Deusi-Bhailo tradition started in the medieval period in Nepal. Although there is no ‘official evidence’ for this, mythology has linked this tradition to the King of Jumla, Bali.

After the fall of the Khas reign in Jumla, a baby who was later named Bali was born. His mother had entered Nepal from Kashmir as a pregnant woman while she was on a pilgrimage. She stayed at the house of a Thapa Chhetri family in a place called Kallai in Jumla.

Cultural expert Jagaman Gurung speculates that the woman may have been involved in incest. He reckons, ” If nothing like this had happened, no woman would have left home during her pregnancy to go on a pilgrimage alone.”

Therefore, he assumes that she may have left her home because she may have been abandoned after being pregnant with the baby of either her own father or brother.

In Sanskrit, this incident is addressed as ‘Sapad Laksha Khasdesh’. Bali became the king of the very kingdom.

As per mythology, it is believed, one day, Chandannath, a learned pilgrim from Kashmir, found Bali as worthy of becoming the king and declared him the king of the village (that apparently did not have any ruler). As he was born in Kallai village, his dynasty was later named the Kalyala dynasty.

Whom did Bali Raja send to play Deusi?

On the day of Lakshmi Puja, the same King Bali allowed Devdases and Devdasis (the slaves kept at temples) to go from house to house begging for making a living. He had given them the right to beg from the day of Lakshmi Puja and also issued an order not to insult them and to offer them as much as possible. At that time also, Bhaili was played on the day of the Lakshmi Puja. Bhaili means “wishing good” (Bhalo).

Originally, Bhaili is a song played only by Devadasis (the girls and women) on the night of Lakshmi Puja. And, Deusi is played from the day of Kartik Shukla Pratipada, the next day.

The Devdases sent by the same king started chanting ‘Devdas re’ to inform others of their arrival. According to the Gurung, the word “Deusire’ that many people chant during Tihar is the corruption of the saying ‘Devdas re’.

Another version of the story

There is another Bali in myths. He was the king of demons. It is believed that Lord Vishnu sent him to hell because he had troubled the gods a lot.

After he was sent to hell, Bali demanded that Lord Vishnu allow him to come to the Martya Lok, the earth, at least for some days.

Then, Lord Vishnu allowed him to come to the Martya Lok for five days of Yama Panchak after he said he could not stay in hell forever.

As the king of demons, Bali was very wealthy. After he was allowed to come to the earth, the gods also started making Martya Lok illuminated for five days in order to save their honour. There is a myth that bright lights and lanterns were lightened everywhere to show that Matrya Lok is not poor even if the Bali had left it.

However, King Bali who sent the Devadasis and Devdases to beg is not the King Bali of this mythology. Many of our festivals are associated with various events in medieval Nepal. 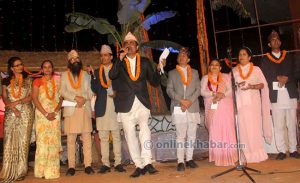 Who started Deusi-Bhailo? Why, when and where? Here are probable answers