Rayamajhi is designing with Nepali roots in Big Apple

A conversation with jewelry designer Arpana Rayamajhi on her dreams, the arts, teleportation and ‘moving things with mind’.

From the feeds of Instagram to the streets of New York, Arpana Rayamajhi has been creating quite a stir with her eponymous jewelry line ‘Arpana Rayamajhi’.

I first met Arpana when she was still in the process of discovering herself. Throughout the years, I have had countless conversations with her and have felt her growth and individuality leading to the arrival of the incredible artist that she is today.

Recently covered by Vogue for her intricate style – a merger of ethnic designs with the designer’s unique stamp of colorful ferocity from all over the world – Rayamajhi takes inspiration from women and indigenous art forms.

I have so many dreams and goals. Little ones and big ones. Realistic ones and supernatural ones. Being able to teleport and move things with my mind is definitely something I have always wanted to do as a child. I remember watching this movie called Matilda when I was a kid many times. Right after the movie, I would go to my room and start focusing, sort of meditating on objects.

I loved world maps. My father got me into it when I was a kid and I would look at the world every day, and try and remember all the capitals of each country. Egypt and Greece were two of my favorite places. I was really interested in Pharaohs and Gods and ancient civilizations. They were too grand and too monumental to be real, yet the pyramids and temples and art still exist which made it even more fascinating to know that they are real.

I am extremely curious about the origin of the world, the possibilities of many more parallel worlds, more than one ‘Shristi’ or one Arpana. Things are too abstract and mysterious and there are so many dots to connect. 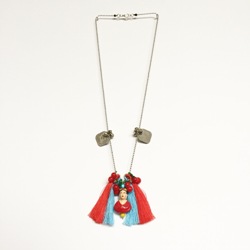 We are all very abstract and mysterious. Making art or being creative is like tapping into this self that cannot be put into words or expressed in any other medium.
I love animals but I have always been a meat eater. With periods of feeling absolutely no remorse to sometimes almost gut wrenching guilt for what I am doing, I do not know where my meat eating habits fit in my “I love animals” statement.  But then I do not eat baby animals, don’t wear fur but wear some leather, do my best to tell people to boycott any animal confinement, don’t like animal sacrifices in the name of gods. So this has always been an ethical dilemma and someday I wish to resolve this.

I am growing and I am learning, and I think deep down I already know what I should do but then I’m a creature of habit finding myself succumbing to my own desires time and again and then disciplining myself again.

Birth of a dream

I was born and raised in Kathmandu and did my schooling here in Nepal until the 12th grade. I had a very good childhood for most part, apart from disliking schools. I loved my friends and knowing about the world. I grew up around lots of animals so I loved them dearly.  After high school, I took a three year gap doing music, art, figuring out what I wanted to do in college. I applied to a lot of liberal arts school at first and upon having accepted to some, I realized that I didn’t know what I was doing.

I don’t know what else I would do if I wasn’t an artist. A teacher maybe. Maybe an activist, if I am not already one in my own way. It is my way of communicating with the world, communicating ideas both fictional and factual, whatever it is with other people.

I love art. It is a medium to connect with the self and the world. We are all very abstract and mysterious. Making art or being creative is like tapping into this self that cannot be put into words or expressed in any other medium. I think art also is a way for me to learn about the world and people. The only art class I took in Nepal was with painter David Douglas when I was about 12-13 years old and I was also studying French at the time. But I always drew/ painted/ made jewelry/ music/ sang and acted. I did everything.

Death has been a huge educator for me in life. Having experienced loss at a very young age and having to become an adult after losing both my parents has been quite a trip.

I graduated from Cooper Union with a Bachelor in Fine Arts in 2015. This is the only school I ever wanted to go to ever in my life. Living in New York and Nepal in itself had already taught me a lot, but studying politics and philosophy and history really shed a light on the world.

One of the artists who has influenced me and my designs is Frida, a Mexican artist. I have felt that female artists are under-represented. They are not given the same recognition as male artists. Being a brown, Nepali female artist competing with men and white women artists becomes hard. Although showered with opportunities after moving to New York, I am not oblivious to the omnipresence of racism and sexism.

Living in Nepal and New York

While taking a sustainable design class in college, we had an assignment on carbon footprint and calculating how much waste we produced. I decided to compare my life in Nepal to that of USA and realized that the amount of resources and stuff we consumed and wasted was significantly higher than in Nepal. Everyone wants a better life but sometimes our concept of what a better life is so disproportionate to what the earth can provide.

I do not have a solution either but I think the first thing we can do is stop feeling powerless and stop thinking that we cannot make this world a better place. We have so much power, given that we can come together to collectively say enough is enough to gender discrimination, wars, uneven distribution of wealth, animal rights and environmental rights.

Death has been a huge educator for me in life. Having experienced loss at a very young age and having to become an adult after losing both my parents has been quite a trip. I am still growing up and have a lot more growing up to do. But one thing that death has taught me is that I am mortal and that I have to be empathetic in life.

Everyone dies. If people just took a moment in a busy place to look around at others, or just at themselves in a mirror and see that we are all going to die, it would maybe change the way we live and behave in our daily life. Often times, everything we do is trying to run away from suffering and death but they are the only real things that can really teach us anything.

There is too much suffering in this world, and I am not sure how much more is needed to change our collective consciousness. I do not wish for any more suffering to anyone, but I really do think we should talk more about suffering and death. It shouldn’t be a taboo.

To know that one day I am going to die makes me realize that I am alive now, and that it is really incredibly special. And that I need to live my life as fully, as honestly as possible. I cannot take anything with me besides knowing that I did the best in everything I could and that I was kind to everyone around me and that I was happy.

It is still a long way to go but to be a better person every day is the ultimate goal in life. And I am figuring out how to do that.