Youth and sports minister of the Gandaki province, Rajeev Gurung aka Deepak Manange, has joined Madhav Nepal-led the CPN-Unified Socialist.

Nepal welcomed him to the party on Monday.

Manange had been elected a member of the Gandaki Provincial Assembly unopposed, representing Manang’s constituency 2.

Manange says that he joined the Unified Socialist because his objectives and the policies, principles and practices of the party matched.

“I am impressed with how the party has conducted itself and the leaders who are in the party,” says a statement from Manange. “I want to tell anyone who wants to work for the good of Nepal to join this party.”

With this, Manange is the only Unified Socialist lawmaker in the Gandaki Provincial Assembly. 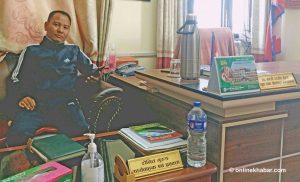