At around 5 pm, March 19, 2017. I am somewhere close to Sundhara, Patan, kinda half swallowed by a labyrinth of gullies snaking through a predominantly Newar locality.

Most probably, I have already walked through these labyrinthine gullies for more than 10 times in course of an hour.

Now, the greening granny has become a familiar face and she throws that beautiful, toothless smile whenever I pass by her (By the way, momma, were we related in some previous birth? Otherwise, why would I come close to you time and time again at that sunny yard housing a decaying, quake-hit house standing proudly with a little help from equally decaying wooden poles? Momma, could I be one of your sons, who died young? No no no, I am not saying this to stake a claim on some prime ancestral property. It’s just that the way you look at me every time I pass by you makes me wonder if we have some distant connection). Craftsmen carving out faces of deities seem to know me well too. For dogs guarding the area, I am no more a stranger and not a security threat anymore. The sweet shop owners know me well too, but they don’t throw that sweet smile any more, because their business instincts have told them I ain’t going to buy their stuff.

The locality’s drug addicts are not suspicious of me (they seem pretty sure I am no informer and no cop out to spoil their good time).  Alcoholics don’t care. After all, they have had their day’s fills.

In this painfully repetitive journey, I have also come across that beautiful girl more than twice (Are we going to get closer in some other janma (birth)? That will be beautiful, though I dread the idea of completing several sorrowful cycles of birth and death to be together, already tired, as I am, in this janma). Other janma is fine, but in this janma, there’s every chance of me getting into real trouble if anyone gets the impression that I am following her, which I am not.

I return to the road and walk by a series of metal workshops where craftsmen are busy making gods. The collective sound of hammers hitting metals in a rhythm enlivens the otherwise sleepy locale. It dawns on me that the process of making works of art is a painful process or rather a painfully beautiful process. Once in a while, smiling, wrathful or meditating deities greet me from the glassy cages of showrooms. Behind these images, there are numerous stories of workers dedicated to the ancient craft, workers, who did not give up despite all the odds, learnt the craft and are working day in, day out to spread the art around the world.

As I measure the length and breath of this place, pale lights start shining and painting the locale in the colours of Vincent Van Gogh, indicating that it’s already evening and that I should rush home. But as Robert Frost wrote, I have miles to go before I sleep, it appears. How can I head home just like that? While pulling my tired body with equally tired legs, I run through a congested network of neurons in a desperate bid to find the point of departure: The point from which I and Polish curator Kris Lukomski headed to the place of Polish artist Piotr Kurka after parking the bike.

In the process, I try to evoke the memories of the child, who used to easily locate houses of friends and acquaintances located in equally labyrinthine gullies of Gwachhemugal, Indrachowk and Naradevi, only to find him missing.

As nothing works, I take a new turn, I take a chance. Anyway, there’s nothing to lose except hours, isn’t it? From the mouth of the gully, I can make out women filling their pots using a motor. ‘Come closer and find a bike by the edge of a well, with a piece of pipe hanging around its footguard. It looks like a Janai (sacred thread) hanging from the body of a Brahmin ready to take a bath! A closer look reveals it’s my bike. That’s my Eureka moment!

Another thought haunts me now. What if I ‘find’ that I have lost the key somewhere. That would mean negotiating the labyrinth several times to locate the key, which will be far more difficult in dim lights. I fumble in my pocket, find the key and heave a lungful of relief.

During my casual conversation with Kris and Piotr, I learnt that art is a journey, the journey is beautiful and achieving something is not of paramount importance (if I am not mistaken). After making several rounds of the gullies, after hearing the sound of the hammer constantly hitting on the metal surface, I realised that art is a beautiful journey. Or rather, it is a painfully beautiful process.

PS: Kris and Piotr are among members of the Polish team taking part in the Kathmandu Triennale 2017. They are putting up an exhibition of their creations at Patan on March 27. See you all there. 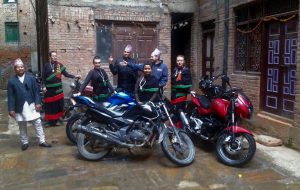 A Poland clad in Newari costume comes to Patan