File: Vote count is underway in Kathmandu after local elections, in Kathmandu, in May 2022.

Nepal is counting votes from the local elections held last Friday. While people are excited about emerging developments, the most surprising news for them has been independent candidate Balen Shah‘s lead in the Kathmandu metropolitan city.

Whereas Balen Shah’s supporters are already hopeful of his victory, the UML and Congress party people think this might not be the case as a lot of votes are yet to be counted.

All local units in the country share this pace. Most units began the count on Saturday morning, but only around 20 local governments have completed the count.

Nepal has 753 local governments, but the election process has been halted in a few of them due to sporadic violence cases on the voting day and deaths of candidates before that.

In five of the six metropolitan cities except for Kathmandu, where independent Balen Shah is leading, the ruling alliance is leading the count for mayoral positions. 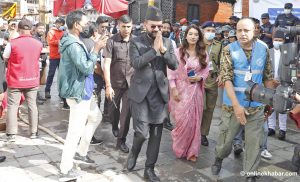