(Read Part I and Part II)

As the trio–Shishir, Bijay and Amul–ploughed on, the highlands with lush meadows, blossoming flowers, and foliage seemingly appeared endless. Shishir guessed at the many species to be the invasive alien species.  Nepal’s eastern and western highlands abound in those species.

The fauna includes rare but endangered mammals such as red panda, musk deer, black bear, clouded leopard, and wolf, to name a few. Recent years, however, saw a rise in massive poaching, further threatening those species, including rare birds like danphe (lophophorus), impeyan monal, and pheasant. Sadly, barking deer (ratuwa) has completely vanished from the Bajhang hills, said a local. After the turfy moors, the landscape switched to jagged granite cliffs shooting straight up into the skies as it were, floating above clouds. The foot-trail cut straight across, the path strewn with rocks and boulders. Suddenly, Shishir caught sight of a Himalayan blue poppy sticking out a rock face. He could not help taking a photograph. “Wow, it just beats me, how lovely flowers like these survive such a harsh environment,” he vociferated loudly to his mates.

As they headed towards the cliff, they spotted people descending. It turned out they were local pilgrims retracing to the village after having paid their homage to Surma Sarovar, carrying with them the holy water from the sacred pond. Curious, an elderly guy stopped to exchange a few words with them.  “How far is the Sarovar from here,” Amul asked the guy. That seemed to amuse him as he informed them they still had halfway to go. That made Amul look fazed. What a group of local devotees next told them appeared a little unsettling. Going by local religious norms, the pilgrims had to make it to Surma Sarovar latest by the morning of Janai Purné. None were supposed to visit after that for such visits were considered a sacrilege. Since they had missed out on that auspicious day, the group suggested there was no justification for going to the holy pond. That put the trio ill at ease. As they held back, still in two minds, another bunch of devotees approached. As words exchanged, Shishir put up the issue with them. “We understand your dilemma, but since you have made it this far and as you are guests, you could still complete your journey. There is no harm in that,’’ said an elderly guy from the group. Relieved, the trio ploughed on carefully avoiding the jagged steps as one false move and the razor-edged rocks could rip open a nasty gash on their naked feet. The elevation made each footfall torture gasping for every shred of oxygen as they further gained altitude.

As they made the punishing progress, they ran into another bunch of devotees on their way back home, who seemed to wind down on a rocky platform, their cane sticks resting beside them. They looked tired but determined. Suddenly, one of the fellows blew into a conch-shell, and the sound lifted into the stratosphere to rebound back soon. They rose to their feet to descend, followed by the rallying call—Cha ha, Cha, ha (chin up, chin up, guys). Next came the passes. First, it was Nachani Pass at 4,560 m. The trail seemed treacherous as they had to slither down on their haunches on the slope.  One false move could spell disaster. They made it through, though, without any untoward incident. Although a little tough on Amul, he too passed muster. The site held a shrine—rocks piled in a three-dimensional, five-tier, almost pyramid-shaped form. The structure housed different deities and a large bell. Shishir wondered at the presence of the shrine in the middle of nowhere in a moraine-like landscape bounded by craggy mountains.

After puja, the trio headed further north and by noon arrived at another formidable pass called Jaljala at 4,590 m, looking ominous in that rocky inhospitable badlands. They took a brief respite and munched on chiura, Wai Wai noodles, and dalmoth. The elevation seemed to take its toll as the breathing grew difficult, and every step a gasp for air. The city-slickers seemed just not cut out for the terrain, particularly Amul. Their progress was reduced to virtually a crawl as the trail got harder and gnarlier, what with the thin level of oxygen, which made it almost impossible to breathe.  “Guys, there is one more pass called Chandé Shikhar to go, at 4,890 m (16,338.58268 ft), a little above the snowline, the highest we’ll have done in this trek,” announced Shishir. Amul looked the most pitiable. He had never in his life attempted that kind of altitude. “This is going to be my toughest and the highest trek ever,” Amul exhaled loudly as he blurted out aloud. From the height, Shishir’s eyes suddenly caught a glimpse of a pond way below, the size of Tau Daha in Kathmandu amidst tall mountains, some snow-capped at the backdrop. Must be the Sarovar, he thought. “Guys, I think we’ll probably make it by nightfall,” he called out to the duo. “There, below, I can see it,” he said, pointing a finger. The assault began for the final pass, Chandé Shikhar. He later learned the Surma Sarovar festival was celebrated with equal pomp and festivity by the locals of Darchula on the same occasion of Janai Purne.

The hallowed pond on that day was crawling with devotees from the two districts. The Sarovar served as a borderline separating Bajhang and Darchula. Shishir later learned the rituals performed by the villagers of Darchula differed from that of Bajhang. The track at the Pass looked scary, buried in snow, hardly a foot apart, and slippery. Each step called for extreme caution. If the left dropped hundreds of feet below on one side, the other fell into a formidable crevasse.  “Man, it’s scary,’’ called out Amul as he appeared awkward doing a tightrope walking, his right hand holding a staff.

Barely had they overcome the hurdle than another appeared, which looked nothing short of death-defying to Amul. They had to haul themselves up a steep rock face with the aid of an iron chain fixed to the wall with sheer drops on one side. Shishir figured the cliff had a recent landslip, and the villagers had secured the chains. “A lifetime adventure of my life,’’ hollered out Amul as he heaved himself over the crag. The trio pushed on with frequent stops for a breather. The landscape continued to be barren and rocky with sparse patches of grassland. Shadows lengthened, and the pale cloud-washed Sun gradually began dipping on the western horizon. The darkness seemed to creep in upon them as it struck six.

Shishir wanted to make it to the Sarovar, but soon his spirits were dampened as a mizzle began, shortly followed by low clouds and squalls of rain. The trio quietly kept walking through the rain, though, wishing to reach their destination. Soon, they had to use flashlights to find their way through the permeating and clinging shroud of blackness.

By 8 pm, they were at the end of their rope and finally decided to camp for the night. The rain continued as they pitched the tent. A thick fog then set in. Shishir had a strong feeling they were not very far away from the Sarovar, maybe just a spitting distance, but he could not confirm his intuition as pitch darkness stood in the way.  Done in and sleepy, they retired early after a quick supper.

Following their last meeting with the local devotees, the trail remained deserted all the way. Later after a brief discussion, they decided on leaving the tent and gear at the spot for the final leg to Surma Sarovar. Nothing to fret about their gear stolen as the wilderness stood out for miles with no sign of any life.

The rain stopped during the night, but the sunless sky was overcast with heavy clouds. As the entire locale was a rocky section, the trail seemed to peter out after some time. As luck would have it, they followed the telltale clues—filth—cigarette stubs, chocolate wrappers, empty tobacco sachets, and the like that was sure to lead them to the Sarovar. And it did.

After something like 35 minutes, they finally arrived at Surma Sarovar. Amul looked the most relieved and the happiest. Next to the pond stood the Surma Mai shrine, a pyramidal stack of stone-slabs similar to the one at Nachani Pass, all decked out with scads of red and saffron-coloured Vedic Bhagwa Dhwajas (Hindu Sanatan Dharma religious flags). Customarily, those flags flown at most of our temples are single pennon. Strangely, the Surma people had devised their own with double pennons similar to our national flag. It is also said Nepal’s national flag, bearing Hindu symbols of Chandra Banshi (Moon dynasty) and Surya Banshi (Sun dynasty), was inspired by the Vedic Sanatan flag.  Shishir could make out the white-bordered flag carried the symbols of a Sun, a crescent Moon, a trident, and others. An elated Amul, went on to fly the flag at the edge of the pond for a photoshoot. As Shishir wound up his story, I could not help asking him a question that kept squirming like an angleworm in my mind right from the opening narration of the story. “It beats me, how you guys did such rugged heights on bare feet. I can’t even imagine doing one single kilometre on naked feet, let alone a trek. Didn’t your pads hurt?” Shishir just smiled back.

Video and images, except other sources mentioned in captions, by Shishir Raj Joshi and Bijay Adhikari

Ravi M Singh is 67. After college, he got into business, all sorts—from chicken feed, furniture, catering to real estate. It worked for some time, but eventually, he gave it up all. 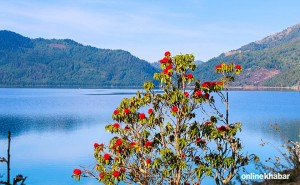 Tourism Board’s task force to suggest how to revitalise industry

‘Nepal tourism industry could take 5 years to return to normality’ 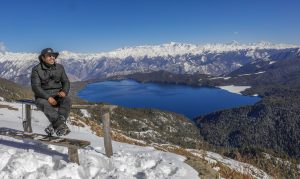 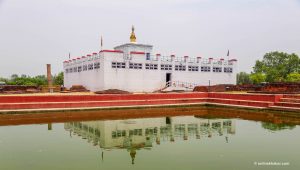 In new normal, spiritual and religious tourism should be Nepal’s priority 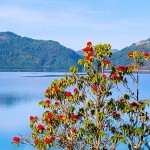 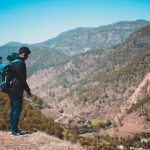 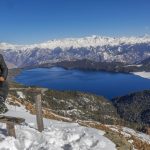