Smashed rods, mangled hooks, broken lines and shattered reels are not uncommon, particularly if the angler fails to handle the big mahseer that decides to dash for the nearest rapid. And you are just left wondering how the hell that happened! An angler once equated grappling the big ‘beast’ with a 10-round bout with no less a boxer than Mike Tyson!

Let’s leaf through the pages of a history book and drift way back to the 1850s, when the British ruled India. The British Raj (1858–1947), they called it. Nobody during those early years of the Raj ever imagined that a fish called the mahseer (mahi- fish and sher- tiger or “tiger among fish” in Persian) would eventually rewrite history.

In 1873, an Englishman, Henry Sullivan Thomas, wrote the book called The Rod in India that dwelled on the natural history of fish, their culture and fishing for mahseer in India. The book became a Bible for the anglers across the globe. In 1948, the book titled Circumventing the Mahseer by Major A. St. J. Macdonald hit the shelves. And it became a ‘Classic.’

The more I studied about this wonderful fish, the more my respect and affection grew and my passion for it snowballed into an obsession. I’d like to narrate one short anecdote from the book here, which, eventually, is said to have won this little-known fish the crowning glory across the globe.

During the British Raj in India, a young British officer was deputised to India in the Assam Province. This English gentleman, like many others from his native country, happened to be an avid angler.

After having comfortably settled and reported for duty, this guy started frequenting the officers’ club to chill out the evenings with his native countrymen. One evening, the fellow officers began to discuss fishing.

The newcomer launched himself into blowing his trumpet on his exploits on salmon fishing back home. He seemed a trifle too long-winded. One of the fellow officers cut in on him and asked, “Have you heard about the mahseer that is found in the Indian rivers”?

When his fellow officers filled him in on the native gamefish, the fellow retorted, “What’s mahseer? There’s no match whatsoever to the ‘lordly” salmon when it comes to freshwater fishing,” he snapped back and went on rambling on about the salmon. It’d be like chasing a wild goose to bring him around, the others realised. A passionate angler as he was, he could not resist himself from trying his hand at fishing. One day, he decided, rather disdainfully, to go fishing to one of the rivers. After something like an hour, he finally got a bite, a big one at that.

A huge 40-pounder mahseer bit his baited hook—and all hell broke loose! The battle ensued. After sweating it out well over an hour, he finally landed the prize fish. Fittingly tamed and cut down to his size by the ferocious fighter, the Englishman from that day onwards never talked about the ‘lordly’ salmon.

The mahseer rewrote history. It became a legend. For the Englishmen, it became the most sought-after gamefish and a hot topic for writing. Books upon books, volumes upon volumes dedicated themselves to this charismatic species.

Apart from The Rod in India, other epics included The Angler in India or the Mighty Mahseer (1903) by Skene Dhu and The Compleat Indian Angler (2003) by John Masters, among a horde of others. Soon, the fame spread across the globe. Jim Corbett called it ‘the fish of my dreams’ and went on to christen it ‘the tiger of the water’.  Skene Dhu named it the ‘Mighty Mahseer’. In the later years, even films were shot on mahseer-angling.

“Of all the mammoth challenges still facing the world’s fishermen today, mahseer along the Himalayas is one of the greatest. Anyone who goes to the Himalayas and pulls off a fish or two has really recorded a triumph, a place in the history of fishing,” wrote John Bailey (writer, photographer and world-class angler), who also did a documentary film on the Golden Mahseer for the BBC’s Discovery Channel in 1990.

Recently, in 2017, fishinghimalayas.com, organised the filming of the “Fishing Impossible” the BBC Earth TV series. The quest was for the ‘gold’—the Golden Mahseer. The film was shot in the Phewa and Begnas lakes, Pokhara and also extended to the far west Nepal to Babai and the Karnali waters.

Yes, it is unarguably the most ferocious freshwater gamefish in the world. Known to fight like cornered leopards, they exhibit brute power and lightning speed that no other river fish can match.

If hooked, a big mahseer sends shivers down every angler’s spine and even the most accomplished angler is humbled by its unbridled fury. Elusive and notoriously difficult to catch, it’s a daunting challenge that demands immense stamina to travel rugged terrain and face harsh weather conditions. Ultimately, your mind must be trained to revel not only in your success but with untold frustrating failures, too. A true mahseer angler is the ‘breed’, who, time and again, must frequent that riverbank where he went through many failures and hardship. It’s like the stubborn mountaineer who fails to summit the Everest but doggedly keeps at it no matter what it takes . . . until he is rewarded.

The modern day tackle for fishing mahseer includes state-of-the-art reels, high-density carbon or graphite rods, top-of-the-shelf lines and myriad of lures that include the spinners, spoons, jerk-baits, you name it. Some, go for live-baits like minnows and apart from artificial flies, fly-fishers even try live river nymphs.

Smashed rods, mangled hooks, broken lines and shattered reels are not uncommon, particularly if the angler fails to handle the big mahseer that decides to dash for the nearest rapid. And you are just left wondering how the hell that happened! An angler once equated grappling the big ‘beast’ with a 10-round bout with no less a boxer than Mike Tyson! The joy and thrill of hooking a big one is so immense that the mahseer angler never tires of relating his experience—the bite, the jerk and the initial rush the brute makes, which can be anything from 100 to 200 yards of your line, as you race along the rocky bank to keep pace with it and finally . . . land it. The book by A. St. J. Macdonald made me ‘take the bait.’ I devoted seven long years to do the study on this species, which took me to a host of rivers stretching from the east to the west of Nepal (read my previous stories).

One of my wanderings to the Koshi in East Nepal to Mai Beni, Baraha Chhetra in 2005 in pursuit of the Golden Mahseer (barbus tor putitora), Pahenle Sahar in Nepali, was the most memorable. I was hung-up on raising a little awareness among the anglers and the local fishing community about the endangered status of the golden mahseer and how to practice conservation methods.

The entire trip to Mai Beni with my fisher friends of Dharan was fraught with a mortal fear that we might, at any time, confront the Maoist activists as the length and breadth of the country was hard hit by Maoist insurgency. Luckily, we did not.

I had not the foggiest idea that my visit caused quite a stir in Mai Beni and Baraha Chhetra. After I was back home in Kathmandu, my Dharan friends called me to say that the Maoist cadres made inquiries about the city-slicker (yours truly), who had the nerve to mislead the riverside fishing community by asking them to release their catches, which meant virtually the same as forgoing their bread and butter. They’d completely misjudged my intentions.

Nepal, under the shadows of the Himalayas, is a maze of rivers, snow-fed and spring-fed, flowing down south into the Ganges, India. Many of these rivers are home to the legendary mahseer including the most-coveted Himalayan Golden Mahseer—considered the ‘icing on the cake’ by anglers.

Our rivers like the Karnali, Bheri, Seti, Mahakali, Narayani and the Mighty Koshi with her seven tributaries hold this species in bountiful supply.

Fishing for mahseer has been an age-old custom among the fishing community of Nepal. If it means bread and butter for them, for other local aficionados, it serves as a great recreational sport. As the access to modern-day tackle for most is still off-limit, they still resort today to the primitive crude methods.

My angling tours to the Sapta Koshi, Arun, Tammar, Sun Koshi and Tama Koshi rivers in the east and the Karnali, Trishuli and Babai in the west revealed many big mahseer catches from 10 to 35 kilos made by the local riverside community. Most of such catches were made on thapuwa balchhi―hooks baited with live fish cast at night and retrieved in the morning. Such catches also included Goonch catfish, which can grow to monster sizes and are found in our rivers, both the east and the west.

The primitive method of fishing days are long past for the present-day fishers. It has been replaced by modern fishing tackle and hardware with futuristic reels and latter-day rods, hooks, lures and line. Mahseer is a migratory cold water fish that inhabits rivers and lakes that have inlets and outlets to a river. It spawns during monsoon floods (June-September). Much the same as the salmon travels hundreds of miles upstream to spawn, the mahseer ascents up-river to considerable heights (from as low as 300 ft. to 2,500ft from sea level), to placid spring-fed feeder streams, to spawn and deposit their eggs.

After the monsoon they return to the foothills, then migrate back again to the upper reaches to breed where there are many snow and glacier-fed rivers—the mahseers’ natural habitat. It is called the migratory run.

During my fishing trip to Mai Beni, my veteran fisher friends had their own way of drawing their views about the migration run.  “When the Brahimini ducks or the Ruddy Shelducks were sighted taking to their wings from the riverbanks and the Koshi revealed schools of  minnows darting upriver literally between our knees in the clear water, we knew the mahseers were on their migratory run,” said Bharat Sunuwar, one of my fisher friends from Dharan.

That was not something my fisher friends learned from a book but from nuances of long experience at the river. I called it the ‘river lore’.

Warning: Reproduction or copy-pasting of this text in magazines or websites without the consent of the author is strictly prohibited. Failing that violators will be held liable for plagiarism. 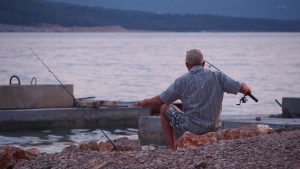 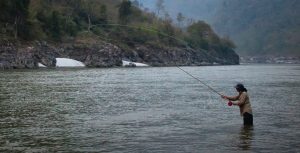 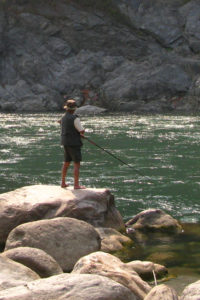 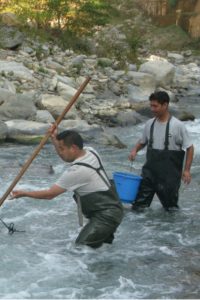 Fishing for a cause in Roshi: How we saw a river depleted, degraded and violated 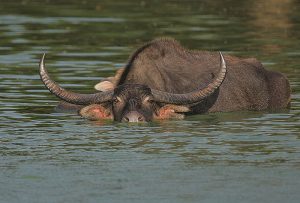 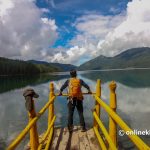 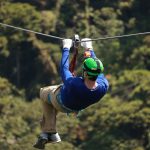 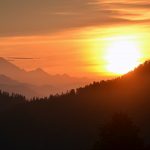