Thamel awaits tourists, but traders want to quit before their arrival

The government of Nepal took 80 long days to relax lockdown restrictions, arguing people’s safety is more important than the country’s economy. But, what if the government had imposed the lockdown for mere one month and afterwards eased economic activities? Would not the country’s economy have been this hard-hit then? Well, these queries can be best answered by the economic experts. Here, let’s go through the tragic sufferings of businesses in Thamel, the tourism hub of the capital.

Ishwari Prasad Bhandari, also recognised as Thamel’s ‘Photo Guru’, has been in the photo printing business for 30 years. This pioneer started his business from Bhandari Photo Studio, which was later renamed as Thamel Photo Zone.

Of late, he cannot be seen in his shop.

After the government eased the lockdown, Bhandari often comes to Thamel to catch up with his friends in the afternoon but does not open the shop as he has already stored the goods of his shop in his home and also had sold ‘decorated’ furniture. He had also informed the owner of the house where his shop is that the shop is empty.

Earlier, everything was normal. He used to pay Rs 150,000 per month in rent for his shop. As he used to earn about Rs 300,000 per month from the very business, he had managed to save some amount after clearing his expenditures.

The photography business has been slowing down since the digital tools’ rise. In recent years, he has stopped shooting photographs and printing them and begun selling cameras, their parts, and other related equipment.

However, this coronavirus crisis and resultant lockdown swept away his business. For Bhandari, this pandemic acted like a landslide, a horrible disaster.

Even when his shop was closed, the rent of the shop was still rising. As his only source of income shut down, he did not have the capacity to pay the expensive rent.

Then, he tried to meet the house owner in the middle of the lockdown, but the owner took 15 days to show up. By then, the government had called the public to waive one month’s rent.

Bhandari had hoped his house owner would “look after him” considering the gravity of the crisis. But, when he met the owner, his hope died instantly.

The owner replied, “I cannot waive a single rupee. If you find it difficult to pay, you can empty your shop.”

Bhandari again insisted everyone was in trouble. In response, the house owner replied, “I will see what the neighbours do,” further frustrating Bhandari.

After that, he was restless for a few days; he did not want to shut down his shop, on which he had invested around Rs 6 million. He had shifted his shop into the house only two years ago. Bhandari, who once had up to six photo studios in Thamel, had now the only shop remaining.

He was concerned about what he could do after closing down the shop. He was also worried about what he would do with all the expensive equipment he had. But, eventually, he decided to close the shop.

This decision was not easy for him. He laid the foundation of photo business in Thamel. He set an example that one can make good money in this business as well.

Bhandari came to Kathmandu from Gorkha, to study, but ended up as a shopkeeper. His kin saw his success and followed him. He also attracted many investors in this business by proving its potential. So, for him, closing the shop was like throwing away the plants he had planted. Still, he had no choice but to end the business.

“Even when there is such a problem, the government is nowhere to be seen,” he says. “Thamel is no longer the same. Most of the businesspersons here are suffering. No attempt has been made to address their concerns. “

Back to the streets In Thamel, there are many like Bhandari. Nawa Raj Tamang, who has been selling gift items nearby, is also going through the same.

He had gone to his home in Kavre during the lockdown and is coming to Kathmandu in a few days, not to run his shop, but to get goods out of the shop. He plans to store the belongings of his shop in a room of his aunt’s house.

He shares, “Immediately, after adding goods worth Rs 2 million in the shop, the lockdown stated. Now, I am struggling to pay the loan instalment, and how could I pay the rent of Rs 40,000 per month?” He says, “It feels we do not have any option but to commit suicide.”

Tamang says that it is not possible to do business in Thamel by renting space. He has already earned a bitter experience of being scolded for asking the landlord for a waiver.

Tamang wishes if the house owner accepted to give a 50 per cent waiver, he could pay by taking some loan. “But, at the current rate, Rs 500,000 is spent annually for rent. How can we pay that huge amount when we are earning nothing?” he questions.

Tamang now plans to sell the bead strings that he was on the streets of Thamel, as a hawker. “This way, I do not have to share my profit with anyone,” he says. “To pay altogether 50,000 rupees rent including the expenses of water and electricity charges, earning about Rs 100,000 per month is also not enough.”

Earlier, he used to sell the bead strings on the streets of Thamel, but again the circumstances have brought him to the streets. In Thamel, old businesspersons were being displaced after the arrival of those who readily paid high rents and praises to the landlords. Some of them had chosen to add investment to sustain. With the Chinese investors coming in, the space rent was skyrocketing steadily.

Now, with the Covid-19 crisis hitting them hard, many businesspersons are planning to shift their shops and enterprises from Thamel to elsewhere. There are many trekking, travel and tour entrepreneurs planning to move elsewhere. Amongst many of them is Gopal Panta.

He feels that now he cannot afford to run his trekking business in Thamel by paying such a high rent as it is unpredictable when this pandemic will end and tourism will flourish. Panta says, “Otherwise, it is tough for many businesses to survive now.” Except for the food and grocery businesses, most of the businesses in Thamel have been badly affected. Former Chairman of Thamel Tourism Development Council, Ram Sharan Thapaliya, asserts many businesses will come to an end if the house rent is not waived.

The council wants a mutual understanding between the house owners and the businesspersons on options of reducing the rent and waiving the rent during the lockdown period until the business returns to its old pace.

It is difficult to find space for shops worth less than Rs 20,000 a month in Thamel. Those willing to operate hotels and restaurants have to pay Rs 200,000 to Rs 500,000 monthly. Those who run clubs pay up to Rs 2 million. Now that, all such businesses have come to a standstill; the burden on the businesspersons has increased. Therefore, the council has requested the local house owners to give a 50 per cent discount on rent for one year.

However, almost all the landlords are not in the favour of such concessions. Since they have to repay their own debts, they have taken a stand that the rent can be reduced only if the government comes up with a proper scheme. 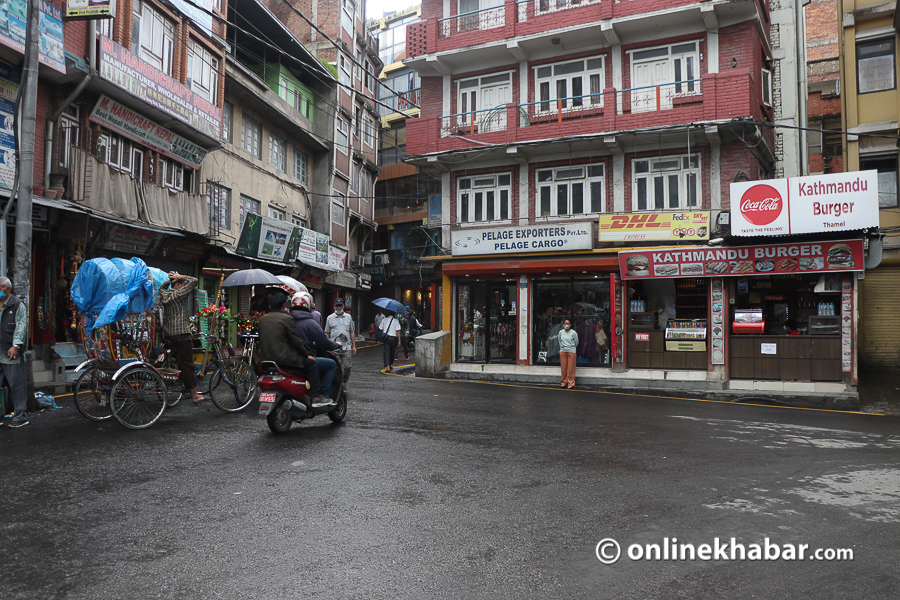 Most of the landlords live out of Thamel and have exploited their properties in Thame as the main source of their income. They argue they cannot reduce the rent by risking their income source.

Landlord Nairitya Man Bajracharya says that he will have difficulty in paying the instalment of his bank loan when the rent is waived. “We did not evict anyone from our house even when earlier people were ready to pay very high rents,” says Bajracharya. “Businesspersons should not surrender today just because they have been in trouble for two or four months. After the Dashain, tourists will come.”

Addressing the National Assembly last week, Prime Minister KP Sharma Oli had talked about a conversation he was having with a crow during his breakfast recently. Why does not the prime minister, who understands the language of crows, once look at the suffering of the people resulted by the negligence and shortsightedness of the government?