Taking Wai Wai to the World

Two decades ago, Binod Chaudhary, a businessman based in Kathmandu, went to Thailand with a proposal. He wanted to partner with Thai Preserved Food, which was manufacturing ‘Wai Wai’ brand of instant noodles, to bring the noodle to Nepal, not by importing it, but by making it in Nepal.

A few weeks later, the Thai noodle maker’s then managing director came to Kathmandu to look at the prospect of manufacturing Wai Wai in Nepal. After spending some time in Kathmandu, the MD reached a conclusion. The official said it would not be feasible to set up a manufacturing plant in Nepal because such a plant would produce 30,000 packets of Wai Wai in a working day, and it was highly unlikely that the noodle could be sold in such a big quantity in a small market like Nepal.

But Chaudhary would not take no for an answer. Having seen how hungry Nepalis were for instant noodles, he told Thai Food he would bear the market risk. Finally, Thai Foods agreed, and a plant was established in Bhainsepati, Lalitpur.

It took only a few years for Thai Food to understand that Chaudhary’s calculations were right. Within a few years, Chaudhary’s company set up four more plants in Nawalparasi; one more plant is under construction in Bardiya. 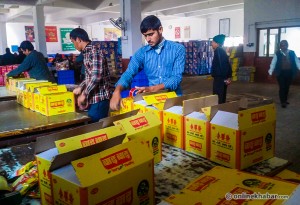 Chaudhary would not take no for an answer. Having seen how hungry Nepalis were for instant noodles, he told Thai Food that he would bear the market risk.

Chaudhary’s journey in the noodle market also took him to India, where he also managed to establish his name. His company has seven plants in India. It now manufactures 2.3 billion packets of Wai Wai every year, and it is being sold in 32 countries. In India, Wai Wai now has a market share of 20 per cent and in Nepal, the figure stands at 60 per cent, despite the rapid rise in the number of new entrants in the market.

Chaudhary says he wants Wai Wai to become a billion-dollar business. The is why he has an ambitious plan to go global. He’s adding new plants in Nepal and India, and also in the Middle-east, Africa, Europe and America. In an interview with The Hindu, Chaudhary, who was declared ‘Nepal’s first billionaire’ by Forbes, said he wants to double the production of Wai Wai in India. For that, he would need Rs 3 billion, and the sum is already ready, he says. The plan is to add four more plants in India within three years, according to the company.

The company has adopted a two-pronged strategy (organic and inorganic) to expand its presence worldwide. The company has adopted a two-pronged strategy (organic and inorganic) to expand its presence worldwide.

Rest of the world

Wai Wai also has expansion plans for places beyond India and Nepal. It says it plans to set foot in the international market by setting up a manufacturing unit in Saudi Arabia, and then in Kenya and Nigeria. For Europe, the plan is to open a plant in Serbia. For the US market, where Nepalis have a sizable population, Wai Wai will be manufactured in neighbouring Peru. Bangladesh is also on Wai Wai’s radar, the company says. Wai Wai plans to set foot in the international market by setting up a manufacturing unit in Saudi Arabia, and then in Kenya and Nigeria. For Europe, the plan is to open a plant in Serbia.

Chaudhary in his autobiography says that he saw Nepali youth carry Wai Wai in their luggage to Dubai, and it was in that moment he told himself that he would take Wai Wai to the world “so that Nepalis, who go abroad, can enjoy Wai Wai without  worry about finishing their stock.”