After starting 2016 on a high, rest of the year has only gloom for Nepali footballers

The first few months 2016 have been memorable for Nepali footballers and fans. Nepal’s footballers not only won the Banga Bandhu Cup in Bangladesh in January, they also beat India on its own turf to win gold in the South Asian Games men’s football.

But the team, which has done all Nepalis proud, will not be playing international matches for at least 22 more months (close to two years). According to ANFA’s published schedule, Nepal’s national team will have to wait for the final days of 2017 to play an international match.

Nepal’s national side is scheduled to play in the SAF Championship to be held in Bangladesh in December 2017.

Nepal’s national side is scheduled to play in the SAF Championship to be held in Bangladesh in December 2017.

The past few months have also seen the meteoric rise of new players, who have with their talent mesmerised football lovers.  Their magic will not be put on test until the tournament in Bangladesh. Nepal has not qualified for any big AFC or FIFA tournaments, and neither have any friendlies been scheduled.

But Nepal could feature in the next edition of Banga Bandhu Cup in January 2017, if it is invited to do so. No formal decision has been taken yet.

No matches, no coach

ANFA has not been able to appoint a coach for the national squad after Patrick Aussems quit two months ahead of time. The team is now without a full-time coach. ANFA’s plans to appoint a Japanese coach has also not materialised.

Not only does the international scenario look bleak, the domestic scene is also not encouraging. After the earthquake, the national league stands suspended, and ANFA has not been able to organise any tournaments to keep the clubs engaged.

There are some who believe that an international tournament should be organised in Nepal itself, but that too looks like a distant dream. 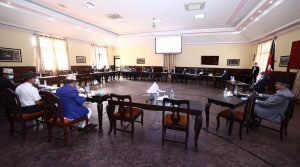