Dav Whatmore, on August 27, resigned as the coach of Nepal’s cricket team. This came as a shock to many as he announced his desire to leave as the Nepal team were already in Oman to take on the hosts and the USA in the 2019–2023 ICC Cricket World Cup League 2 tournament.

When he joined Nepal, he was tasked to do two things, perform well in the World Cup League 2 tournament and make sure Nepal kept its ODI status intact. But with three months still to go as per his contract, he quit.

Why? There are major two reasons.

Officials who worked closely with Whatmore say he quit because he did not get what he wanted and was left disappointed by the Cricket Association of Nepal (CAN).

CAN, which was suspended by the ICC in 2016, had finally resolved all the disputes as a new board was formed under the leadership of Chatur Bahadur Chand. But, the Chand-led board has not been as successful as people had hoped it would be. Even Whatmore had hoped things would change. But as he did not see any changes, he left, say people close to Whatmore.

Sources say that Whatmore wanted separate coaches for bowling and batting and also wanted a technical analyst. But, CAN refused to give him these people. He tried talking to CAN officials, but everyone had a different point of view on the issue, which frustrated the World Cup-winning coach.

Sources in CAN tell Onlinekhabar that during the start of his stint, he was not paid on time too. That had also left a bad taste along with the attitude of some players. He had complained that few players did not obey him. Paras Khadka retiring also played a factor as he would lose someone who had a grip on the dressing room.

“CAN is a mess and he is not someone who cleans the mess. He felt enough is enough and quit. No one can blame him,” says a source in CAN.

2. The man with a different mission

But, CAN President Chand does not agree with claims that he left because of CAN. He says Whatmore was happy with CAN as it had been doing most things he asked for and was paying him on time.

“Nepal wasn’t in his priority, that is why he left,” says Chand.

Before Whatmore came to Nepal, he was on the verge of joining the Baroda Cricket Association in India. But, due to Covid-19, Ranji Trophy, India’s domestic cricket tournament, was cancelled. Chand says he came to Nepal because he could not go to Baroda.

“I feel he didn’t have an intention to stay here. He had some free time, that is why he came here,” claims Chand.

Chand’s claim seems valid too. The Times of India on March 8 had written Whatmore would return as the Baroda coach as soon as he could.

Baroda Cricket Association (BCA) president, Pranav Amin, had told the paper Whatmore would join the association as the coach of the Ranji team in the upcoming cricketing season.

“We wanted him to stay till March 2022, but he didn’t want to stay. It’s okay; things like these happen. We will move on,” says Chand.

Former captain Khadka, however, says it would have been better had Nepal been able to keep hold of such an experienced coach.

“I don’t know why he quit; but had he stayed, we would have surely improved,” says Khadka. 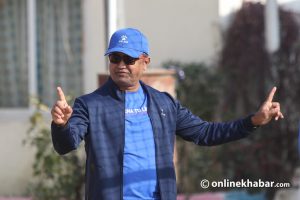