File: The national football team of Nepal arrive in Kathmandu after winning the 2016 SAG football finals held in India.

Nepal does not have its own sports policy. Neither does it have plans for the sector’s management and sustainability. The priority of the sports sector is evaluated according to the government’s annual policy and programme and the budget plan.

For a long time, the government has been including the sports sector in its programme and policy to motivate the players. The players’ prizes, allowances, and social security are included separately in the title of ‘motivation’.

But, stakeholders argue to make the players successful on a global platform should have been a priority as it is a real motivation. However, due to a lack of sustainable policy, there has been a dearth of development in infrastructure, training and regular competition except for a few highlighted sports such as cricket, leaving players in other disciplines demotivated forever.

Recent policy and programme and the budget plan announced for the upcoming fiscal year 2022/23 have not been any different.

The prizes awarded to the players for their successful performance in international competitions by the government and non-government sectors are generally considered motivation in the Nepali sports sector.

“The motivation for players can be observed from various angles. The provision of reward and lifetime allowances for players who succeeded in an international competition is considered as motivation,” says Deepak Shrestha, president of the National and International Players Association, also a two-time gold medalist at the South Asian Games.

In the current year’s budget plan, the government proposed a programme of providing a subsidised loan for the retired players willing to start a business. But, it is unknown whether the programme introduced to motivate the players met its purpose. Even the players are clueless about the programme.

“We were happy to see such a programme by the government. We even thanked the ministry and National Sports Council. But, till one year, no concerned body stepped up for its implementation,” says Shrestha. “The ministry and the NSC haven’t been found informing players about the procedure of loan”.

In the new budget plan, the government has announced providing a lifetime allowance for the players who have bagged medals in Olympic and Asian Games.

Shrestha is amazed by such a programme in the budget because it was already introduced seven years ago and has been implemented since then.

Even the gold medalists of SAG have already been receiving lifetime allowances. But, this year’s budget does not mention anything about the SAG medalists.

“I have found the players (SAG medalists) anxious thinking whether they will stop receiving the allowance that they have been getting,” says Shrestha.

The sports sector, which only receives 0.18 per cent of the total budget, has not been a priority of the government.

Sufficient infrastructures, regular training and international participation are the real motivation for the players. But, there is not a sufficient budget to conduct a close camp, says Shrestha.

“We are in need of budget management and its efficient implementation for developing the sports sector. The poor management and a lack of priority are creating hassles in the work that is mandatory for the growth of the sector,” says Shrestha.

Experts also argue that the government is adopting the wrong way to motivate players.

“The cash price given to the players after they receive medals in international competition is not a motivation, that is a respect,” says Achyut Lamichhane, A sports expert. “The players also receive a lifetime allowance after winning medals in the Olympics and Asian Games.  But, the real motivation is not about rewarding; it is about making them capable of winning.”

Everyone who participated in international events cannot win. So, the government should ensure the security of all those players and create a favourable environment for them to win the medals. “That is a real motivation,” says Lamichhane. 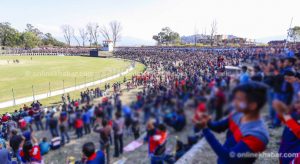