On July 2, 2021, Hastana Rokaya from Thantikandh rural municipality in Dailekh of the Karnali province gave birth to her third child before she turned 27. After constant nagging from her in-laws and husband, Rokaya, already a mother of two girls, decided to try again hoping that her newborn would be a boy. But, to her and her family’s shock, she gave birth to another girl. Like her first two times, she was sent to an impoverished shed nearby with her newborn daughter.

“This is a tradition in Karnali,” says a health post official. “I don’t know if she even got to eat properly there let alone have enough care.”

Six days after giving birth to her third child, Rokaya died. No one knows if she died due to the cold, an illness or hunger.

“The villagers told us that she died of hunger. This is so disheartening to us, health workers, who work so hard to ensure that it’s a safe birth, but when the families of the mother do nothing to take care of her, it breaks our heart,” says the health post official.

This is a recurring issue in the Karnali province, one of the least developed provinces in Nepal, where a lot of new mothers are kept in sheds meant for animals. They are not even given healthy food times or a proper bed to sleep in. This is the case even for mothers who give birth to sons. For those who give birth to daughters, the treatment is even worse. In the past four years, 90 new mothers and over 700 children have died due to poor care received after birth.

Twenty-two-year-old Shital Shahi from the same rural municipality in Dailekh of Karnali gave birth to a son on July 31, 2021. Like Rokaya, Shahi, after birth, was also kept in a shed. But due to poor condition and lack of proper care, the child died a few days after birth.

There are so manly examples like this in Karnali alone. In October 2021, Sangita BK, 18, underwent labour pain. As the health post was far, a midwife was called to assist BK’s family in delivering the baby. Like everyone, after birth, BK was taken to shed a close to the house.

“They kept me there for 13 days. They didn’t let me touch anyone nor did anyone touch me. They didn’t even feed me properly,” says BK. “A lot of women face this in Karnali and there is nothing we can do about it.”

For Bhumisara KC, 22, the 13 days were nothing short of torture. She was kept in a dark room, almost resembling that of a solitary confinement chamber of a prison. She was asked not to touch water, fruits and was even refused dairy products.

“That is what the tradition here is. They say if we touch things we aren’t meant to, the gods will get angry. We don’t want to take the risk,” says KC.

Even health workers like Sarita Bohora from Humla have to face the same problem in Karnali. Bohora was 14 when got married and by 15, she gave birth to her first child at home. In Adanchuli municipality, they have separate sheds for lactating mothers and that is where Bohora spent her first three weeks as a mother. Her family had laid some hay in the shed and gave her a blanket. Along with that, she was also given some food. To ensure no one came near her, they also tied a dog next to the shed.

“I was a child then and spent the night alone in the shed scared, and anxious,” says Bohora. “Things have changed, but not as much as it should have. These sheds are still there and new mothers still face this problem. I want to change things there, but people still think they will be affected by a bad omen.”

These are only a few examples as lactating mothers and their children in Karnali continue to die due to living in harsh conditions during the first few weeks after birth. Superstition and age-old traditions have forced these new mothers to suffer at times when they are the most vulnerable.

The news of these deaths are published in newspapers every year, but nothing changes as the people firmly believe that something bad will happen if they do not do this.

In Karnali, there are other problems too related to child birthing and related care. In October 2020, Samjhana Shahi died after she reached a critical stage in her pregnancy. As she was suffering, her family took her to a nearby health post, but it asked her to take her to Jumla. But the family did not have the funds to take her to Jumla. They called for a midwife instead, but by the time the midwife reached Shahi, the baby was dead.

Parwati Shahi in 2020 died on the road as she did not receive the care she needed while giving birth. After giving birth, she started bleeding a lot. The health post officials could not stop the bleeding and asked her family to take her to a hospital. They called for an ambulance, but it never came. They tried taking her in another vehicle, but she never made it to the hospital and breathed her last in the vehicle. The family had to mourn another death as the child also died soon after.

Lack of basic healthcare in villages has also resulted in a lot of mothers dying, says midwife Yamuna Shahi from Khandacharka municipality in Kalikot.

“Most villages here don’t have health posts or roads. We have to refer critical cases to hospitals and with most hospitals in the capital of the district, a lot of women die on their way,” says Shahi.

According to the province’s Health Service Directorate, 80 women have died in the past four years. This year, nine women have died, says Man Kumari Gurung from the directorate. “The geography is harsh here and that makes it hard for us to help them and for them to come to us.”

What’s troubling is that 650 newborns have died in the same period. The rate is worrisome, say experts.

Female foeticide is still a problem

Nepal’s abortion law deems female foeticide illegal. But, in Karnali, this issue is still prevalent. Most people in the province feel that they must have a son. That has resulted in a lot of mothers suffering physical and emotional pain.

Guru Singh from Nalgaad municipality in Jajarkot has eight children, out of which the last one is a boy.

“I didn’t want these many kids, but pressure from family and society about the need for a son forced us to try until we had a son,” says Ganga, Guru’s wife.

The importance of a son is high in rural Karnali that people celebrate birth like an occasion. But, if it’s a girl, rarely do people from the village know.

“The discrimination is due to these age-old traditions. Imagine what women and young girls feel when they see this,” says a midwife from Thantikandh rural municipality in Dailekh, Bhumisara Shahi, adding this is killing many mothers and children.

Shahi thinks, with education, things would change. But, in Karnali, that has not happened as even educated women do not oppose and continue to carry on these archaic traditions.

Women being exiled and asked to live at chhaugoths during menstruation is a common practice in Karnali. But, exiling women after birth is even crueler.

It’s not that people have not tried to stop these malpractices. There have been a lot of campaigns to stop exiling women during menstruation, but not enough dialogue has been held.

“During menstruation, young girls are kept in these sheds for up to a week. For new mothers, the number goes up as some even spend as much as three weeks there,” says Bhumisara Shahi. “They don’t even give pregnant women and new mothers healthy food to eat. They are treated worse than animals.”

Citing bad omen, some only give them rice and oil to eat as food. As this tradition has been going on for centuries, no one says anything as they too believe in it.

“I feel sick when I see these women in these sheds when I go check up on them on the 12th day,” says Bhumisara. “But like them, I don’t say much because I know it’ll be taken negatively.”

The government knows this is a recurring issue. To help these women, the Karnali provincial government launched a free air ambulance service. But, not everyone has been able to use this service.

“Air ambulance is a good initiative, but it is not a practical long-term option as not everyone is able to use it,” says Devi Oli, a member of the Karnali Provincial Assembly. “We need to ensure that we have proper health care even in the remote parts of the country.”

And, work is being done in this regard, informs Sunil Limbu, the information officer at the province’s Social Development Ministry. Limbu says the government is working towards providing more skilled human resources at birthing centres and district hospitals.

There are 79 health centres in the 10 districts of the Karnali province, but most of them do not have quality health equipment. 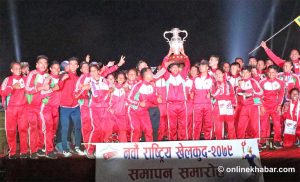 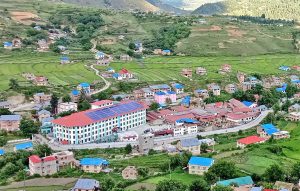