Until 2012, India had always been Nepal’s number one source for foreign direct investment; it had no competition from China. But in the last four years, Chinese investors are aggressively making their presence felt in Nepal; China usurped India’s position as number one source country for two consecutive years.

What has happened in the last 10 years?

For the majority of the last 10 years, Indian investors have had no competition in Nepal when it came to setting up businesses. In 2005-06, India’s FDI commitment stood at Rs 1.56 billion, while that of China stood at Rs 0.18 billion (around nine times lesser than that of India). The trend continued until 2011-12 when India’s commitment reached 2.28 billion, while that of China hovered around Rs 1 billion. 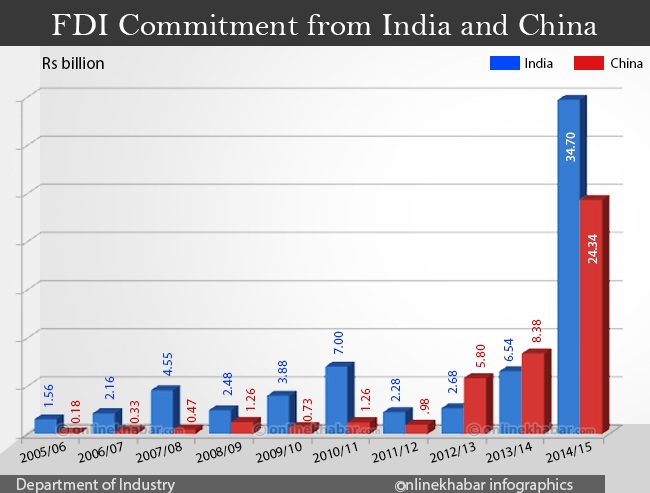 For the first time in history, China became the number one source of FDI in Nepal with investors committing Rs 5.8 billion. Indian investment hovered around Rs 2.6 billion.

The growth in Chinese investment can partly be attributed to the boom in arrival of Chinese tourists, and Chinese companies’ securing of deals in mega projects and government contracts in areas such as telecommunications. In most hydropower projects, Chinese companies bagged the civil works, hydro-mechanical and electronic contracts. Chinese telecom equipment vendors — Huawei and ZTE — enjoy near monopoly in the telecommunications infrastructure sector.

It all started when Nepali tourism agencies first participated in the China International Travel Fair in 2000. On April 16, 2001, the governments of the two countries signed an initial memorandum of understanding on a plan to encourage Chinese people to travel to Nepal.

A year later, the China National Tourism Administration granted Approved Destination Status to Nepal and in June the same year, Chinese nationals began visiting Nepal, officially for the first time as tourists. Soon after, the central banks of Nepal and China inked an agreement to make Chinese currency convertible in Nepal. It was also this period (2006) when Lhasa, the capital of the Tibet Autonomous Region near Nepal’s border, was connected to the Chinese railway network. Chinese airliners such as Air China, China Southern, China Eastern and Dragon Air also expanded their services during this period.

Fast forward 10 years, Nepal and China signed a memorandum of understanding that would allow airliners based in both the countries to conduct 56 flights per week to each other’s territory.

As Prime Minister KP Oli embarks on his visit to China on Sunday, the figures remind Nepal that India is still the number one source of FDI in Nepal. India regained its position in 2014-15 with Rs 34.70 billion committed as FDI.

Going by the trend, it seems that the competition between India and China will continue in the future, as investors in these giant countries realise Nepal’s potential. It would be up to wise policy makers in Nepal to make full use of this opportunity.