Police in the Dang district of Lumbini have arrested the provincial State Health Minister Bimala Kumari Wali on the charge of assault.

Inspector Ranjan Bahadur Swar of the Tulsipur Area Police Office says she has been taken under police control after she was found to have beaten a woman near a vegetable market in Tulsipur on Tuesday morning.

Police say they had received a complaint of the assault from the locals. 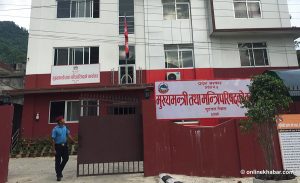