Aadharshila: This is the ‘last and only’ Marxist commune in Nepal In Gauridanda of Mahottari district, a few kilometres north of Bardibas, 15 families live in a commune in a ‘Marxist way’. They claim this is the only existing commune in the country.

Communal use of private life

The commune, named Aadharshila (meaning ‘foundation stone’) is stretched just around 500 square metres. It has a two-storey house. Inside the house are a living room, a waiting room, and a guest room. It also has a garden where two white rabbits are seen playing with each other often.

On the other side of the road, four one-storey houses stand. One of them is used as a kitchen and for dining, while the other three have three bedrooms each.

The commune is in operation for the past 17 years. Indra Raj Lama, a member of the commune, says, “Our philosophy is that life is private, but its usage is communal. Therefore, we are in a pathway to become a commune.”

Giriraj Mani Pokharel, the current minister for education is also one of the founders of this commune. However, Lama says Pokharel does not stay in the commune regularly owing to his political engagements. He says Aadharshila is actually a family of 45 people belonging to 15 biological families, but only around 15 people stay there regularly.

Lama looks after the education department of the commune. Every morning, he takes breakfast by 7. Three ‘mothers’–Punam Mahato, Pushpalata Ghimire, and Asha Giri–prepare breakfast by that time.

After breakfast, two of the young members go to college. Ghimire leaves for a hostel that the commune runs nearby a local bus part. Lama is a part-time teacher at two local colleges. Mahato and Giri would prepare lunch before Lama comes back before noon. Mahato’s husband Shankar is the personal secretary of the minister, hence he lives in Kathmandu currently. After lunch, Mahato’s children go to school while Lama goes to Deurali High School, for teaching again.

The commune was established, in 2003, with the main purpose of education and nurturing of children, according to its members.

When the king took over after a coup d’état, escalating the already active armed conflict, the then CPN-United Centre Masal leader Narayan Kaji Shrestha went underground. Pokharel was the ‘eastern region commander’ of the party. “Many colleagues of mine became full-time party cadres. Many others died in the conflict,” Pokharel remembers. “Many politicians were worried about their children than themselves. So we started this commune for the education of 18 full-time cadres and the deceased ones.”

The shelter of the commune was situated at Golbazaar of Siraha at that time. A public high school was nearby, where the children would study. Later it was shifted to Gauridanda of Mahottari.

The commune’s policy bars children from getting admitted to any private school. The parents are focused on improving the condition of a public school rather than admitting their children to a private one. Lama explains the logic behind it. “Our main objective is to improve the situation of community schools. Or else, the development of education is impossible.”

The early days of the commune were full of hardships. It was merely supported by the funds collected from different public institutions. In particular, well-wishers of the cooperative model of the commune would donate money, and the relatives would commit a portion of their income as well. But still, they were insufficient. “Sometimes, we could not buy new clothes for the children,” Lama remembers, “The principal would not let our children attend the examinations (before we paid the fees).”

But, inspired by the communes established in China and France, the commune would look at the bright side of the social life and keep on surviving. Later, a few more families joined. After 2006, when the conflict ended, the fighting Maoists accepted the democratic practice and surrendered their arms to the government. It was when the party led by Narayan Kaji Shrestha unified with the Maoists. The commune was intact through these changes.

The commune took a big leap in 2010 when all the members decided to give their inherited properties to the social institution to tackle privatisation and imply proletarian idealism. A few of the family members were not happy with the decision. However, the members were aiming to move Aadharshila towards their ideal: not keeping anything privately and giving everything to society. The decision was key to having a permanent infrastructure in Gauridanda.

Celebrated theatre artists Sunil Pokharel and Nisha Sharma also contributed to the team. The actors provided the proceeds of their drama ‘Putaliko Ghar’ (Rs 150,000) to the commune. It was enough to buy around 338 square metres of land.

The land is currently barren, but one can notice from dry stalks that it yields pigeon peas in the other season. The lentils have already been stored, according to Lama. The commune members also grow vegetables like onions, eggplants, and cauliflowers as well as fruits like guava and lemon.

There are two cowsheds. The families of the commune feed on the cows’ milk. “We had also started livestock farming as an enterprise,” says Punam Mahato, “But we could not be successful in that.”

The commune had also operated a spice factory that would sell spice products not only in Bardibas but also in Kathmandu. This small-scale industry was another source of income, but it was discontinued as the members got busy campaigning for their leaders during elections.

Now, Aadharshila has leased 15,000 square metres of land at Lalgadh in Dhanusha. The rice produced there is enough for the commune members throughout the year, and the commune pays Rs 15,000 per annum to the landowner. When the commune shifted to Gauridanda in 2010, the quality of education in the public school nearby was not good enough. The school neither had doors and windows nor would anyone take attendance of the students. Even the roof of the school building was damaged and it made the school look like a hut. “The first thing we did was transforming the school after coming here,” says Lama, showing a big building of the school, which is visible from the waiting room.

Now the Janata Secondary school has been registered as a high school where science, diploma agriculture, and veterinary courses are taught until grade 12. The school has four concrete buildings now. The school is the model school of Province 2 as its students have topped the SEE exams in the province three times and have secured the second position once.

“We have launched a campaign for education, health, and cultural transformation,” says Lama, “This is where our children study.”

Currently, four students from the commune go to school. A few students who completed the school level are in Kathmandu.

Inspired by the Paris commune, the current members of Aadharshila are bound by the communist party’s ideology. “The communist ideology can only be fulfilled when we can get to the core,” Lama argues, “Nothing is private in communism. We are increasingly pushing towards the direction of the commune. That is our main philosophy.” 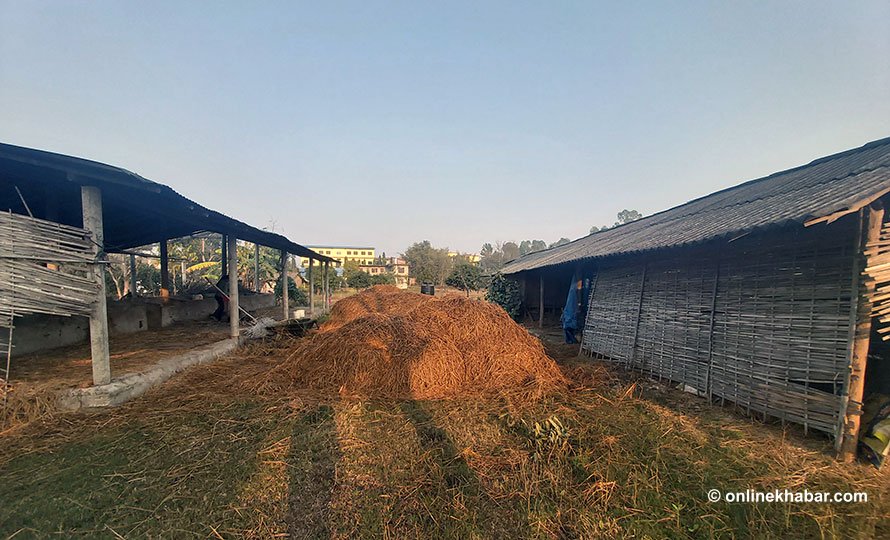 People from Siraha, Dhanusha, Sarlahi, Kathmandu, Okhaldhunga, and Khotang are living in the Aadharshila. Whatever they do, they give their earning to the family. Minister Pokharel says “My income and expenditure are allocated for by my comrades.”

Lama keeps a small part of his income from his teaching for personal expenses and gives the rest to the commune. “I keep nothing for myself,” says Lama, “Everything is collective. So everything that is created by my personality, whether be it an award, a prize or a wage, belongs to the family.” While the world is delved into privatisation, Aadharshila is heading towards the opposite.

While many communists of Nepal are prioritising private property, Aadharshila is one of the last remaining communes in Nepal.

During the armed conflict, the then Maoist party had established several of such communes in Rolpa, Rukum and other strongholds. But these communes started disappearing once the Maoists came into the peace process. Now even the remains of these communes are hard to find. While the senior leaders of the party came to live in Kathmandu and none looked back, many members of these communes became bankrupt. Some flew to India or the Middle East to earn their livelihood.