Which way is the wind blowing for this renewable in Nepal?

The answer: it will take time to find out, and more time to implement what’s ‘found out ‘

* Generating wind power is costlier than hydropower in Nepal

* There are no concrete figures available

* A World Bank study will come up with figures in 2018

When Prime Minister KP Oli announced that his government was going to “harness wind energy,” he was criticised for not being grounded in reality. In his defence, Oli explained that it was not only possible, but there were a few places in Nepal where it was already being done.

The government has already given its nod to a foreign company to conduct a pre-feasibility study to ascertain whether 300 MW can be generated from the wind. But government officials and experts say it is too early for the Prime Minister to make such a tall claim, given the plethora of challenges facing the renewable energy sector, the wind power in particular.

Prakash Aryal, senior technician at the Alternative Energy Promotion Center (AEPC), says it will take at least four years to generate enough electricity to make any significant progress towards reducing power cuts. But that too will need unprecedented levels of investment, which the government has not committed to yet, and a radical reform in the way we look at energy.

Mesoscale Modelling is the most popular way to design a wind energy system these days, says Aryal. Under this model, data obtained from satellite images over 10 years are analysed and tested for two years. In Nepal, however, not a single  study has been conducted so far. According to international practice, during the two-year testing, technicians analyse daily, monthly and yearly data, and then a detailed project report can be prepared. But that too takes at least a year. Only then can investors decide whether they want to put their money in the project. If the returns are low, it is only natural that they will be reluctant to invest. 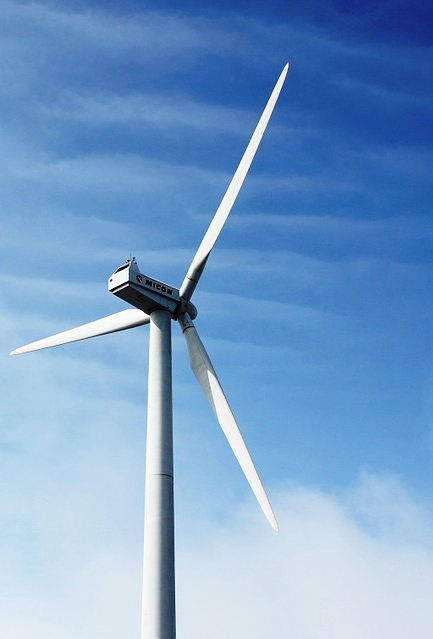 “That is why if someone comes along saying he wants to invest in wind power, it should be taken with a pinch of salt,” explains Aryal. Even if they are willing to invest, they need to get the required government permits, and set up a plant. This will take at least six months.

“If someone comes along saying he wants to invest in wind power, it should be taken with a pinch of salt.”

Onlinekhabar talked to various stakeholders in the energy sector to identify major challenges for wind energy in Nepal (in no particular order).

Transporting wind turbines is a major challenge given the condition of roads in the country, especially in hilly areas suitable for wind farms. According to one estimate, a turbine with a 35 metre span blade is needed to produce 1 MW. The turbine is ‘one-piece’ and cannot be separated for assembling later on. Most of Nepal’s roads do not allow for a 180-degree turn, and that is why transporting the turbine is a big challenge.

Even if the turbine is transported and installed, connecting the power plant to the national grid is going to be a big challenge. Wind energy can be generated only in areas which, till now, are not connected to a transmission network . Without connecting the plant to the national grid, the energy produced cannot be utilised because there is not enough demand for electricity in Nepal’s rural areas.

The nature of electricity produced from wind is different from that generated through hydropower projects. The amount of electricity generated at any moment in time is dependent on the strength of the prevailing wind. The amount of energy generated is not constant, it fluctuates. According to estimates, a wind turbine can generate power up to its potential only 30-40 per cent of the time. According to NEA officials, Nepal’s distribution system is not designed to manage fluctuating power.

After 1990, the government  liberalised the economy, and started promoting private investment in hydropower. But it did not do the same for alternative energy. It would not be a hyperbole to say that Nepal’s energy policy benefits hydropower investors at the cost of those who want to put their money in renewable energy. It takes more time for a wind power investor to get returns on investment than it does for a hydro investor. That is why renewable energy investors need incentives, and that is not available in Nepal at the moment.

According to widely-accepted figures, it is believed that around Rs 200-250 million is required to produce 1 MW of electricity using wind power in Nepal. However, the figure stands at Rs 150-180 million in case of hydropower. In addition to this, in case of wind power, the government needs to invest billions in upgrading access roads and establishing a transmission network that can manage large-scale fluctuations.

World Bank to soon come out with figures

The World Bank is currently studying the prospects of wind energy in Nepal. The study, which began in 2014, will come out with some concrete figures in around three years.