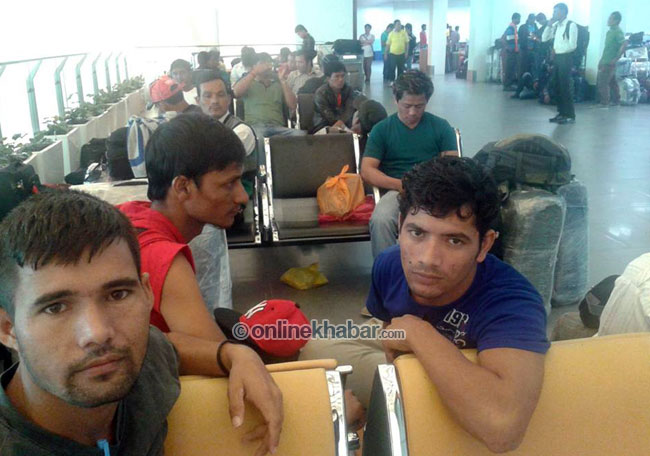 Birendra Chhetri of Dang has been stranded in the UAE for the past 10 months. He was lured there by the offer of the Dubai Police job, but he was fleeced of Rs 500,000 in the process. Now, he fears if he has to get into legal trouble even to return to Nepal.

Chhetri is a representative of many young people cheated by foreign employment agents and left stranded. Likewise, there is also a big number of youth who had gone to the UAE on visit visas, returning to Nepal after being stuck there for months and registering a complaint at the Department of Foreign Employment, seeking compensation.

On January 4, the Department of Foreign Employment raided Babystar International Pvt Ltd after nine youth from Siraha were left stranded by in the UAE on a visit visa. However, no documents were found there.

Then, the monitoring team went to a hotel in Gaushala of Kathmandu and confiscated two passports with visit visas stamped on them. According to a victim, Afzal Miah, they were held hostage at the hotel for six days.

These incidents show how the recruitment agents are misusing visit visas for fraudulent activities that could amount to human trafficking. Further, this problem has left concerned decision-makers in a dilemma about whether to tighten the visit visa criteria to prevent trafficking or to loosen them in respect of their human rights.

Human traffickers offer seemingly legitimate jobs in European countries and Afghanistan, only to lure them into forced labour in the UAE by fleecing large sums of money. Many Nepalis are arriving in the UAE illegally, dreaming of getting a ‘working visa’ within three months by going on a visit visa after not finding any job in the country.

And, this trend is increasing every day, suggests the statistics of the government itself. According to the Department of Immigration, from September 1 to December 31 last year, 26,000 Nepalis went to different countries with visit visas. Of them, 9,000 had gone to the UAE only. Likewise, Kumar Dahal, the Director-General of the Department of Foreign Employment, also reports this number has increased with the reopening of international flights that were suspended due to the Covid-19 crisis.

The Director-General of the Department of  Immigration, Ramesh Kumar KC, considers the number of Nepalis going to the UAE “to visit” unnatural. “How can we believe that 9,000 Nepalis went to the UAE to visit during such a pandemic?” says KC. But, his own office records show they received visit visas from the UAE government.

Further, KC adds, “ It is becoming more difficult to differentiate between the Nepalis going for an actual visit and for labour using a visit visa. We thoroughly examine every document of those going to the UAE. After checking, once everything is in order, we cannot stop them.”

During such checks, the immigration has stopped 425 people also, but 200 of them later flew by providing necessary documents requested by the department, reports KC.

It has been alleged that the human traffickers who used the visit visa as a weapon have arranged a ‘setting’ at the immigration office at the Tribhuvan International Airport. But, the Department of Immigration sees other issues as a bigger problem than this.

KC says that the Nepali embassy in Abu Dhabi has written a letter to the department after the number of people stranded in the UAE who went there on visit visas increased.

KC says, “We are in a dilemma on how to conduct the checking strictly when people are being trafficked in the name of visit visas. Because it is a human right and a fundamental right to be able to travel after getting a visa.”

To resolve this problem, discussions with the concerned bodies such as insurance companies are underway, informs KC.

“We have proposed to make it compulsory to have periodic insurance of Rs 1 million to Rs 1.5 million for a visit visa,” says KC, “We have tried to make arrangements to bring those people back by using the same amount in case there arise any problem after reaching abroad.” He further adds that the matter will be resolved in a few days.

Likewise, KC says, “We will strictly ask for the source of the money with clear documents that explain from which bank, at what rate and when the foreign currency was exchanged.” Currently, most of the people who go on a visit visa for labour are found to be carrying illegally exchanged foreign currency.

However,  the existing rules say the Department of Immigration should allow the person carrying the proof of hotel booking, two-way air tickets, sponsorship letter, and 1,000 US dollars to go freely.