Any Nepali two-wheeler enthusiast will recognise the internationally-attended annual event known as the Enfield Rendezvous & Poker Run. In its 8th year now, Poker Run has grown from an event attended by a dozen or so local Enfield riders to hundreds of riders from around the globe, all celebrating the Nepali New Year together, and doing a few good deeds along the way as well.

For those unfamiliar with the term Poker Run (which is often confused with Pokhara Run), let me just say that this type of riding event is common amongst riding clubs such as the Hell’s Angels and other motorcycle clubs the world over. Typically, these types of rides have an element of card play, in the sense that each rider gets a playing card at each stop, and then at the ride’s destination, the riders with the best hands win prizes. The prizes are usually corporate-sponsored by an energy drink or a Vodka company, angling for a bit of fun advertising.

Organized first by the Aussie rider Stewie Mclean – and now carried on by Rabi Thapa and his team from Sacred Summits, a tour company, Nepal’s version of the Poker Run has become something truly special within our riding culture.

Our runs are sponsored by the likes of Yeti Airlines, Nepal Ice, and dozens of other well-known hotels and restaurants; even the Nepal Tourism Board has helped in making the ride grow each year – with this year’s event expected to see over 200 riders, many of whom have traveled all the way from India (and even further abroad) to attend.

But what is not so well-known about Nepal’s Poker Run is how it was first a dream in the mind of one of Nepal’s roughest riders, a true Nepali adventurer and explorer: Binod Chhetri Acharya (26 November 1976 -13 September 2008).

I first met Binod in 2003 or so, having just returned from Sikkim on a solo ride, where I had carried my motay frame plus bags on a tiny 125cc Yamaha. He too was a huge motay guy, and when he saw me and all my stuff on that little bike (overheating and ready to die from exhaustion), he just laughed and screamed “Jigeeeee!” 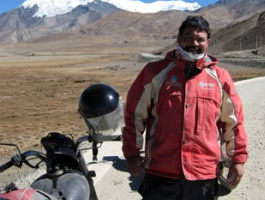 So it was Binod who introduced me to the Royal Enfield, and helped me purchase a 2004 Bullet with 350cc of much-needed power. For that (and his steadfast and supportive friendship), I am eternally grateful.

In the years leading up to his unexpected demise in 2008, Binod showed me a Nepal – and a Tibet – rarely seen by a foreigner, as he would take me to the craziest places on earth one could go on a two-wheeler: roads that were nothing but rivers, yak trails that even yaks dared to tread, sleazy-looking truck stops with the best dal bhat, and many other insane places not mentioned on any map.

In short, he was one hard-riding sun of a gun.

Yet there was an underlying beauty to this scar-faced man who would have made any Bollywood villain tremble; he was gentle but tough with me, a newbie rider, and he had a fierce desire to see Nepal improve, and come into its own on the international scene. He had a love of the open road that rivaled my own.

It was his dream to see the biker club (the Himalayan Enfielders) he helped start grow into an international association with riders from all over the globe. He also wanted to see a club house with a big welcome mat out front for all these riders –welcoming both locals and those from abroad.

He was a true hospitality entrepreneur, and a visionary that loved thumping down the highways at break-neck speed.

He is sorely missed by all that knew him. But the point of my reminiscing is to point out his achievements, and that his dream is becoming a reality, in the sense that the Poker Run has become a successful event, with tour companies like Sacred Summits now inviting the international riding crowd to explore Nepal, India, Bhutan, Sikkim, and beyond.

With the help of Binod’s many friends, there are now biker bars here in Kathmandu as well as in Pokhara, acting as a hub for fellow bikers who enjoy the thrill of the open road on two wheels.

As part of the “pay it forward” aspect of every Enfield Rendezvous & Poker Run, this year there will be a donation of books, sports equipment, and other learning aids gathered for the needy children of the Siddha Higher Secondary School of Phale Patan, Pokhara.

There is nothing like seeing the faces of these kids as hundreds of thundering Enfields thump into their playground, transporting gifts like biker-bound Santa Clauses. This is one of the top highlights of each and every run. Needless to say, Nepali biker clubs are not what you would expect, and nothing like the Hell’s Angels of the yesteryears. They were notorious for their sex-drugs- rock n roll behavior on the road.

Instead, the Nepali version of a biker club is much more tame and humane. For example, my first ride with the Himalayan Enfielders back in 2004 was a day’s outing to the memorial established for those that died when PIA Flight 268 crashed into the hills near Lele.

Instead of a ruckus party full of nakedness on the back of a bike, the scene that day was more like a family picnic on wheels. Folk guitar, singing and snacks just about summed it up – along with the beautiful landscape of Nepal both there and beyond.

The Poker Runs are a bit wilder than that, falling on Nepali New Year’s eve and all, and while drinking and driving is discouraged, there is plenty of free beer and vodka once we reach Pokhara when all the bikes are put away. There is always a live band and plenty of crazy dancing, and the last time I attended, they just about closed down Lakeside as we rode in, welcoming each rider with a khada.

A few final notes on this year’s Poker Run: the ride is not just for boys on Royal Enfield toys (although it kinda started out that way), but instead, all are welcome. Anything that rolls is okay as far as transportation goes, and women riders are encouraged to join.

In fact, it seems everyone is welcome in this quintessential celebration of Nepal’s natural wonders. For example, this year I’m driving a car, just because I want to take my 40kg German shepherd dog, as he is way too big to fit on my bike.

Jigs Gaton is a quirky kinda-American retiree, happily living in Dhobighat with family, friends and pets, and whose greatest love outside of that is being able to ride around the countryside of Nepal, free as the wind.

More from the author

Thamel: In the Garden of Unfulfilled Dreams

Have you been to the ‘expat zoo’ in Kathmandu?

Who is an expat? Who is a migrant worker?