A flood in Chame, the Manang district headquarters, in June 2021.

Incessant rainfall since Tuesday has hit the Manang district in the Gandaki province hard. Officials say floods in different parts of the district have submerged nearly 100 houses.

Details are awaited from various villages as the floods and landslides have cut off electricity and telephone wires, leaving several places out of contact, according to officials.

Chief District Officer Bishnu Lamichhane says, “Complete data have not arrived yet, but so far, we have learned 30 houses were submerged in Talgaun, 48 in Chame, and 15 in Dharapani.”

Because the rainfall has not subsided, Lamichhane says, the plan to bring a helicopter from Kathmandu to rescue the locals submerged has not been implemented. “Now, we are waiting for the rain to stop.”

The officials have relocated over 300 locals residing in the district headquarters, Chame, to a building of the District Jail.

“The entire district is hit hard, but the downstream areas are affected even harder.” 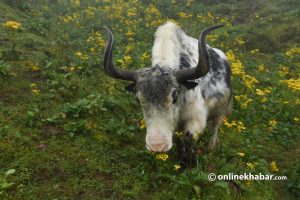