Danda Gaon: The getaway that feels so near yet so far from Kathmandu

Yes, if you go to Danda Gaon and peer over the wooded hillside to your south, the sprawling valley appears literally at a stone’s throw distance. But the proximity to a pristine forest, the towering Shivapuri peak and the quiet moments spent with nature and her bounties leave you with the impression that you have come a great distance.

For Kathmanduites, weekends mean a lot. You feel like spending the once-in-a-week break somewhere, anywhere . . . not very far off to escape from the daily drudgery; the claustrophobic urban jungle; the hive of frenzied activity; the impossible traffic gridlock; the dust and emission, the almighty swell of humanity and a city drowned in a cacophony of sound and nasty stench.

If it’s a picnic, it could be the same old spots such as Godavari, Nagarkot, Gokarna, Bajrabarahi, which have remained for long the popular jaunts or for that matter, the Zoo at Jawalahel. On the other hand, you may wish to spend your time on quiet family outings. Danda Gaon is one such destination, which promises to be a lovely picnic spot on weekends–or if you fancy a quiet outing on weekdays.

If you have tried Danda Gaon(1,800m), you are among those fortunate ones who like to try newer spots, close to nature. If you have not, it’s just the place, the kind that often haunts your imagination–someplace new, someplace different . . . to breathe in the fresh air, to smell the woods, the pollen, the grass, and the earth!

The only downside is that no public transports ply between Budanilkantha and the wooded height of Danda Gaon. That, I suppose, is not much of a problem because most of you own a vehicle, one kind or the other. You can hire a cab if it comes to that. If not, maybe it’s not a bad idea footing it to the place from Budanilkantha Chowk (buses and ‘micros’ shuttle to the busy intersection from Ratna Park). Lots of people do, just for the fun of it. It will take you a little over a one-half hour–can be fun if you are with your friends as you huff it uphill through a quiet beautiful forest.

I bet it will give you the much-needed stretch to your legs, as you will have hiked six kilometers by the time you reach the place . . . surely breaking a real good sweat.

Shayeet (my cycling companion) and I, pedaled to the spot on our mountain bikes. We chose the road via the ancient town of Tokha and headed north to Chandeswori, an old Hindu shrine located at the base of a wooded hill. Considered a “shakti peeth,” the Chandeswori shrine draws a large crowd of devotees on certain festivals including the Dashain. A large statue of Goddess Kali also occupies the temple premises. Next to the temple, an off-road path forks to the right and climbs up the side of the wooded hill with small settlements on the way. After something like one-half kilometers on the stiff climb, the off-road meets the paved motor-road from Budhalinkantha that goes to Danda Gaon.

For cyclists, the climb offers a real challenge puffing and blowing up the quiet wooded hill. The return trip is a treat for the mountain bikers as it’s downhill all the way–sheer adrenalin pumping   “shredding” either way you choose it, through the Budanilkantha town or the Chandeswori route. Motorbikers, on the other hand, can enjoy the ride no less.

Danda Gaun has to offer more. Apart from a one-day outing, you can even extend it to a one-night retreat. The hilltop has a number of resorts such as the Danda Gaon Jungle Resort, the Green Valley Resort and a couple of others.

After half a kilometer from Budanilkantha Chowk, the straight wide road through the bazaar area crosses a bridge over the Bishnumati River, narrows, and starts climbing towards the wooded hills.  Before the forest begins, a sign at a bend pointing upward reads Shivapuri Nagarjun National Park.

With no habitation and shops the rest of the way, the road winds up through a beautiful forest, dense, quiet and undisturbed. The jungle is so thick at places that the sun can hardly penetrate the dense canopy.

After around two-and-a-half kilometers on the uphill flanked by dense wood, you arrive at a sentry post manned by military personnel; nothing to get alarmed about it, though.  You are at the entry point to the Shivapuri Nagarjun National Park. You need to check in, register your name and if your outing extends to deeper into the Park Forest, you need to buy tickets (Rs. 125.00 for Nepalese/Rs.1,050.00 for foreign nationals). After completing the formalities, you continue uphill through the Park Forest. Please be advised that you need to slow down as you cruise past several sentry-posts on the way-and apparently no honking. After something like a couple of kilometers, you enter the Army Command and Staff College premises. Moments later you will catch a glimpse of a beautiful white building reminding you of a British country manor house surrounded by matching lush-green lawns and lined with flowerbeds. A solitary cannon sits with stacked projectile shots on a raised platform by the roadside. Only a fleeting glance is all you can get as civilians are not allowed to stop the vehicle and hang around the premises–strict army regulations. As expected, the place exudes an air of flawless orderliness, so typical of the military.

After 10 minutes, you cruise by the last sentry-post and crest the hilltop–that’s Danda Gaon (1,800m: Google map).  If the north is covered with thick forest, which forms the core Park zone and extends to the Shivapuri peak (2,732m), the south commands a spectacular view of the Kathmandu Valley.

Predominantly a Tamang village, Danda Gaon consists of small clusters of houses scattered on the terraced gradient intercepted by cultivated land that drops to the foothills.

Things to do in Danda Gaon

Picnicking: Picnicking at Danda Gaon can be fun, but to do that you will need to select the venue from among the number of resorts located there. The park area does not permit picnicking. All you got to do is book your place and place an order for food; the resort does the rest.

For hikers, Danda Gaon offers a number of choices– from day-longs to hour-longs or simply a walk around the village and watch the rural life go by or stop to chat with the local folks. A leisurely walk down the hillside will take you around the scattered Tamang settlements.

You can hike further down to Dulal Gaon and Fulbari. The elevation affords a bird’s eye view of the town of Jhor Mahankal, north-west of Kathmandu. If you love a quiet walk through a lush forest, a two-hour walk north to Surya Chaur, Guruje Bhanjhyang (highway to Nuwakot) serves your interest. The Shivapuri forest boasts both a temperate and sub-tropical forests such as the pine, alder, wild Himalayan cherry, and rhododendron to name a few. In the hushed trail, the trees and thick shrub stand as silent sentinels as crickets and birds break the silence.

Mountain biking across this stretch of forest to Guruje is equally thrilling as the trail cuts through thick forests and some technical sections with one rock garden that requires challenging maneuvering. If you are lucky and tread lightly without making any noise (animals in the wild are said to fear human voice the most), wildlife like barking deer, pine marten, kalij pheasant or the hefty Russian wild boars (introduced in the 1970’s as gifts to the then King Mahendra) might cross your path.

Leopards, including clouded leopard and Himalayan black bears, too, are natives of the Shivapuri forest; but rest assured, no need to feel jumpy as they are nocturnal and while you trudge along the jungle trail they would be bedded down in profound slumber in some impenetrable brush deep inside the far reaches of the forest.  Sightings of pheasants and barking deer are common, though–that is if you maintain silence. 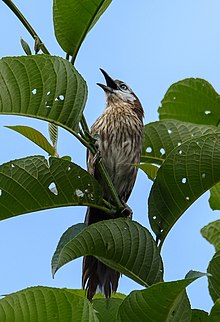 With more than 300 species of birds,  the forest is home to rare bird species like the Hoary-throated Barwing (babbler family), White-throated Tit and no less than the jewel in the crown of Shivapuri forest–the elusive Spiny Babbler (kande Bhyakur in Nepali). An endemic species, they are found only in Nepal. Bird watchers, the Shivapuri forest sure promises a treasure trove of the rarest of bird species–you can bet your bottom rupee on that!

In the same fashion, a one- hour-walk north-east across the Park Forest, then another half-hour of a stiff climb on stone-steps coupled by narrow jungle trail through dense thickets brings you to Bishnudwar (1,950m), the perennial spring-fed source from where the sacred Vishnumati river drains. The trees standing around the river basin are festooned with colorful prayer flags. A cave-like hollowed out cavity in a solid rock face holds a shrine. A short footbridge constructed with tree-branches and no guardrails spans the Bishnumati River (hardly 5m wide), which at the time we visited was just a trickle. Another footbridge leads down the river to hollowed-out rocks which appear like caves as the water flows in between big rocks and boulders. Little surprise, the water from Bishnumati appeared gin-clear during our visit. I shook my head in disgust as I thought about the same river literally turned into open sewage as it enters the urban sprawl.

Day-long hikes include the Bagdwar(2,490m), the source of the Bagmati River, the Shivapuri peak, and Nagi Gompa, a nunnery located above the craggy cliff of Tarebhir and Chisopani among others.

Caveat: Hikers are advised to exercise caution and avoid straying from the specified tracks as you might get lost in the dense forest that covers a massive 134 sq. kilometers encompassing three districts–Kathmandu, Nuwakot, Sindupalchok, extending as far as the Dhading district. Following several reports of missing hikers in the past, the park rule has made it mandatory to hire a licensed jungle-guide for foreign nationals.

If you wish to spend the night at Danda Gaon, there are a number of resorts to choose from. We tried the Green Valley Resort. Set up a decade ago, what I liked about the place was its expansive lawns and a terraced landscape with a wide view of Kathmandu valley. The food was good and the service impeccable. Regarding accommodation, you are spoilt for choice from Tented Luxury huts, Villa Studios to Swiss Cottage and the Presidential Suite. The interior of the Presidential Suite done in two-tier with an exquisite Western pastoral architecture with paneled floors and stairs was exquisite.  I later learned that the small house used to be the residence of the Australian architect Tom Crees of the Kurintar-based Riverside Spring Resort-fame.  (He won a prestigious award for it).

“We offer special packages for couples and arrange for guides too for those who wish to hike around the Park Forest,” said Ganesh Shrestha, the resident manager at the resort.