The Palanchok Bhagwati temple lay swathed in bamboo scaffoldings when I visited the famed pilgrimage site in the first week of March 2018. Obviously, the structure was undergoing repair and restoration in the aftermath of the damage caused by the massive April 2015 earthquake. This incidentally was the second quake the structure miraculously pulled through from being knocked down– the first being the colossus earthquake of 1990 Bikram Sambat (my mother often recounted the tale at great length when I was a kid. She was seven years old at the time of the quake). Save for a slight tilt to the right, the temple structure survived. Curiously, very few know about the tilt of the structure, which went totally unnoticed for more than eight decades.

Before the earthquake of 2015, the idol of Kali, resembling a stone pillar, was lodged in an inverted position. “The reasons for that, as the myths went,” added Bajracharya, “was to stop the Kali’s frequent devouring of humans who happened to visit the Goddess after dark. And to accomplish that, Gubhajus (priests from a Newari clan) were sought and Vedic mantras and tantrik rites were performed. The Goddess Kali’s onslaught was said to have stopped after that.”

In almost all cases, deep-rooted history and legend characterise the temples and shrines in Nepal. So is the Palanchok Bhagwati–steeped in history and age-old myths. It is said that the founding of the Palanchok Temple at the present location was just a happenstance. The story goes back to the Licchavi Dynasty and its first ruler, King Manadeva First (464 -505 A. D). Going by the folklore, King Manadeva, once in his dream, was visited by the Goddess Palanchok Bhagwati who wished her idol re-located from a small village called Buchhakot elsewhere in the north. The king lost no time and with his Queen set upon the venerated mission escorted by a royal entourage along with the porters bearing the idol of Bhagwati. At sunset, the royal retinue with the troops pitched camp at a wooded hilltop called Jagpankpur. At early dawn, the next day, the royal team prepared to strike off camp and head further north. To the bewilderment of everyone, the porters failed to heave the idol of the Bhagwati on their shoulders despite every possible attempt made. Confusion and uncertainty descended on the camp. Words flew around and the King was duly informed about the unexpected predicament. Priests, learned pundits and tantriks were sent for to find an answer to this fortuity.

After long discussions and a pressing consultation, the royal priests arrived at the decision that the Goddess willed to be instated at the very spot where she had been laid for the night and advised the King to that effect. Consequently, the foundation stone of the present day Palanchok Bhagwati was laid. That made the little-known settlement called Jagpankpur a famous pilgrimage site and got its present-day name, Palanchok Bhagwati.

Each year a festivity marks the Palanchok Bhagwati premises as the residents of Buchhakot, which sits atop a hill to the south on the Sindhuli /Bardibas highway in Kavre district (visible from the temple site), pay their homage to the Goddess Palanchok by performing Chhyama Puja (a ritual asking forgiveness and granting of happiness and good health) on the full moon day of Baisakh (May) and Jestha (June).

Revered as a Navadurga (nine manifestations of Goddess Durga) and united with the Shakti Peeth (holy places of cosmic powers), Palanchok Bhagwati Goddess is said to manifest herself in three different incarnations. The mornings find her as the embodiment of Supreme Power, the Divine Mother of the Universe, and the Savior of mankind from evil and misery–the Goddess Bhagwati or Ma Durga.  At daytime, she poses as Ma Saraswoti–the Goddess of Learning and Wisdom. After dark, the goddess transforms herself into the formidable Kali Ma, the terrible Destructor. Nitya puja (daily prayers with the chanting of hymns and the clash of cymbals) is performed each morning by the pujaris (priests). The evenings are scheduled for Aarati (rendering of bhajans or religious songs). 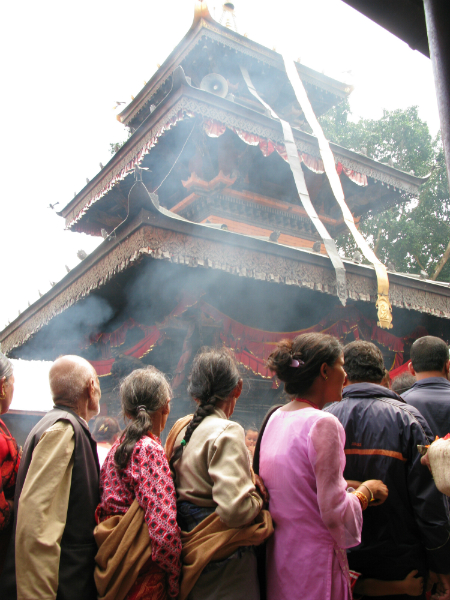 Curiously, unlike other shrines, the practice of animal sacrifice at Palanchok Bhagwati totally breaks with convention. There is no bar on days for the sacrifices and the ritual is carried out even on Ekadashi (the 11th day of a fortnight of a lunar month/slaughtering of animals is prohibited on this day in Nepal), Purne (full moon day) or Aunshi (the day with the darkest night with no moon of every lunar month).  Panchabalis (sacrifice of five animals) that includes buffalo, goat, chicken, duck, and sheep are made during the Dashain festival. Devotees who do not wish to make animal sacrifices offer pigeons meant for release or just duck eggs. Other forms of worship, include bhakals (a vow made to the deity), lakh-batti ceremony (burning of 100,000 oil-dipped cotton lamps), and just plain darshan (homage) and puja(veneration).

On Saturdays and during the Dashain festival, the Bhagwati temple is thronged with devotees full to overflowing with little or no room for movement. People wait in queues for hours to perform puja. Likewise, each year on Chandi Purnima or Baisakh Purnima (full moon day in May), festivity marks the temple site with people streaming in from the nearby villages and towns. During Dashain and on Buddha Jayanti (Lord Buddha’s birth anniversary), chariots bearing the images of Goddess Bhagwati and Ma Kali are driven around the village of Palanchok Bhagwati.

On such occasions, although the holy Hindu scriptures ordain the chanting of Vedic hymns (sacred scripture of divine knowledge) while worshipping Hindu God or Goddesses, surprisingly, Buddhist tantrik (spiritual studies reflecting the practical aspect of Vedic tradition) verses are observed by the priests designated at the Palanchok Bhagwati temple.

Historians believe that the architectural marvels of pagoda style were initiated in Nepal during the Licchavi era, first brought in from Myanmar (Burma).

It was later adopted in China and gradually spread far and wide throughout Asia. The pagoda-styled Palanchok temple is three-tiered with wide overhanging eaves supported by intricately carved sal-wood tundals (struts). The furthest up slanting roof is finished in burnished gold while the rest in copper gilt.

The walls of the temple are finished in red brick and elaborate wood carvings, while the windows are latticed. The carved main gate is finished in heavy gold-plated metal.  A triangular golden gajur (spire) embodying a jeweled crown, kalash(water vessel), lotus and a gong, make up the pinnacle. Bells and leaves in bronze hang in profusion under the eaves. In the forepart, two dhojas (long narrow pennons/banners) dangle down the spire, one gold-plated and the other a copper gilt, symbolising the paths for the Gods to descend.

Bronze and stone lions stand sentinel around the temple. The four walls of the temple also houses, stone deities of Shiwa, Narayan, Mahalaxmi, Saraswati , Anantadevi , Ganesh and even Murkuttas(headless demons). Bells and gongs abound the temple. Outside the northern wall of the temple lies a slab of stone known as the Betal (phantom) where, according to the myths, the sky (heaven) and patal (the infernal region/hell) rendezvous on full moon nights.

Enshrined within the temple, the one-meter-tall idol of Bhagwati carved in polished black stone depicts the exquisite features of Nepalese art and sculpture. Endowed with 18 arms, the idol is bedecked with silver ornaments. Swathed in vermillion, the Goddess Bhagwati’s multiple arms brandish a horde of astra/nastra (weaponry and symbols) such as the trishul (trident), axe, chakra (lord Visnu’s disc), gadha (mace) and a Khunda (scimitar). She also holds a fish, human skulls, patra (vessel), a damaru (a miniature hand-held drum) and a bell. More prodigious arms of Bhagwati extend and grab Mahisasur’s (demon King) toupee and a buffalo’s (Mahisasur’s incarnation) tail. Slain Shumbha and Nishumbha (demons, acting as Mahisasur’s henchmen) lie by the goddess’s feet.  Mounted on a lion, one of her feet tramples Mahisasur while the hand holding the trident stabs him.

Located on a hilltop at an altitude of 5,125 feet from sea level, the historic Palanchok Bhagwati temple, 56 kilometers east of Kathmandu valley, is accessible through the Arniko highway. It used to be a two hours’ drive from Kathmandu some five years back, but because of the road widening work underway and the heavy traffic plying the road in the recent years, it takes almost three hours.  The road runs through familiar towns like Bhaktapur, Banepa and Dhulikhel. After Dhulikhel the road wends downhill to the fertile Panchkhal valley.  After Panchkhal, at a small settlement called Lamidanda (47 km.), you have to take the right fork that goes uphill for the last leg of nine kilometers on a narrow zigzag course up a steep grade.  Notable places on this stretch include the Hokse village and the Nepal Army’s UN Peace Keeping Force training barracks. Places of interest at Palanchok included (before the 2015 earthquake) a historic village called the Satthi Ghare (meaning 60 houses) with red soil plastered stucco houses, the only settlement Palanchok had in the early stages. Save for a handful of houses, the entire village was rebuilt after being razed to the ground by the colossal earthquake of 1990 B.S. The ill-fated village did not survive the April 2015 earthquake, though. I was dismayed to see the entire village totally destroyed.

On Saturdays and during festivals, the forepart of the Palanchok temple is thronged with devotees and vendors selling flowers, duck eggs, coconuts and puja (worship) items. To the west, the temple overlooks a stunning view of the outspread Panchkhal valley with the sprawling fields as the Jhiku Khola(stream), meanders through the middle. To the east, the ridge drops to a breathtaking landscape of hills after wooded hills interspersed with terraced fields while the river Sun Koshi, partly visible from that distance, cuts through the middle. The temple site also boasts Peepul and eucalyptus trees, almost 200 to 400 years old.

Close to the temple, mostly tea shops and eateries line up the street. If you feel like it, try the sel-rotis (round rice-flour dough-nuts), a local delicacy, fried before your eyes at the road-side shops. For foreign as well as domestic tourists, comfortable overnight stays are also available at Palanchok.

All photos are from before the earthquake.