The tree of life: Moringa Oleifera Yes, it is a tree highly spoken of as the Tree of Life or the Miracle Tree. The Nepali word for it is Sheetal Chini and Shobhaanjan or more commonly Sahijan in Hindi.

Curiously, this plant seems to have won more acclaims in the recent years than any other species of green perennial plants. “It’s like growing multi-vitamins at your door-steps’; “its leaves contain insane levels of nutrients”; “the moringa leaves prevent 300 diseases”; “their tiny leaves have the potential to save the lives of millions of people on our planet”– are some of the quotes that this tree has bagged.

Native to Nepal, India and Pakistan, they are also known as horseradish-tree, ben oil tree, zogale or drumstick trees. Of the 13 different species, Moringa Oleifera is widely and commonly recognised. It is consumed both as a vegetable and a medicinal herb. Cultivated and eaten extensively in India, the moringa leaves are widely sold in the Philippines like any other common green leafy vegetables.

Deciduous with sparse foliage, the moringa trees grow to medium heights of 25 to 30 ft and thrive in the mid-hills, the Siwalik and the Tarai of Nepal. The wispy trees with drooping branches bear drumsticks like fruits (pods are twenty to fifty centimetres long with seeds), small white flowers and rounded leaves, all consumable—pods, seeds and the blooms.

I was taken by complete surprise when a very close relative of mine wrote to me from West Palm Beach, Florida, USA that they have a moringa tree in their garden and they frequently eat its leaves and pods cooked as Nepali curry. She also revealed that it is very easy to grow–you don’t need a seedling to plant. All you need is the pod or a branch to transplant it.

Moringa oleifera is available in varied forms such as organic extracts, capsules, powder, tea, and oil. Extensive cultivation of moringa olefeira is done in Kunathari, Surkhet in the Bheri Zone of mid-western Nepal (click link for video clip). 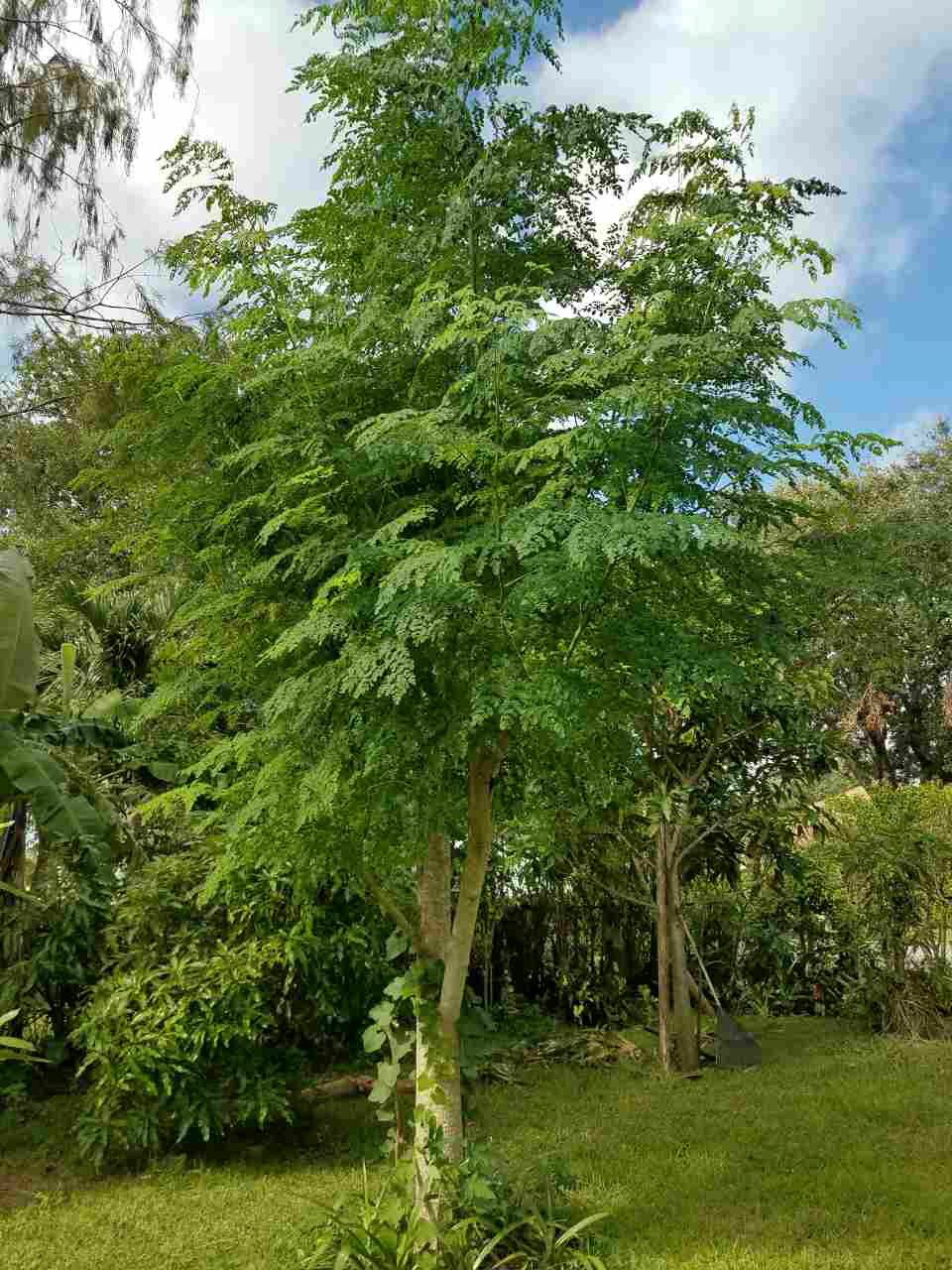 To go by the Ayurveda, the Moringa oleifera, the Sanskrit name, Shigru, has been in use in traditional medicine in India for over 5,000 years to treat ailments such as diabetes, heart disease, anemia, arthritis, liver disease, respiratory problems, skin, liver problems, paralysis, sterility, rheumatism, digestive disorders and many more.

In India, it was named the ‘plant of the year’ in 2008 by the National Institute of Health and Family Care. In Africa, it is also used for the treatment of ascites, pneumonia and venomous bites.

The drumstick tree leaves are said to be anti-fungal, anti-viral, anti-abortifacient, and act as flocculating agents and stimulants. The leaves, considered more nutritious than the pods, are said to be a rich source of protein, Vitamin B6, Vitamin C, riboflavin and iron.

In the third world, it is considered as a highly potential ‘economical herb’ for its resistance to drought, a rapid growth needing no tending and by far for its extraordinary nutritive qualities.

Also touted as a superfood, the next thing about this wonder tree might leave you scratching your head! Claims have been made that the “Moringa olefeira packs seven times the Vitamin C of oranges, four times the calcium of milk, three times the potassium of bananas and two times the protein of yoghurt.” Sound amazing–rather take it with a grain of salt?

The moringa drumstick pods and leaves are considered an excellent source of carotene, calcium, phosphorus, ascorbic acid, flavonoids and a treasure trove of anti-oxidants and anti-inflammatory efficacy.

Diabetes: In type II diabetes, oral ingestion of Moringa oleifera (experiment done on mice) reduced blood glucose level by approximately 21 per cent and a drop in the HbA1c count was detected by 0.4 per cent.

“The high nutrient content in the leaves is especially beneficial to pregnant women and infant development” (Nepal FAO, 2007).

Cardiovascular health: The various antioxidants, including quercetin, present in moringa help to check the risk of heart attacks and strokes. The anti-inflammatory and anti-oxidant properties of moringa are said to inhibit the lipid peroxidation to rise in the myocardial tissues and hence keep the heart healthy. Adequate and regular intake of moringa, therefore, is said to help keep the hypertension level in check and curb the rise in LDL cholesterol.

Lungs: The moringa seeds for their anti-pyretic properties are said to benefit lung function and upper respiratory tract infections, especially in the cases of children.

Cancer deterrent: The bioactive niaziminin and isothiocyanate compounds found in moringa leaves not only help prevent the arteries from thickening and inhibiting the development of pulmonary hypertension, which if left untreated can lead to heart failure, but it is also claimed that it makes significant contribution to the treatment and prevention of pancreatic, gastric, colorectal and breast cancers.

Kidneys: The anti-oxidant properties in the moringa leaf extract helps to neutralize the oxidative toxins present in the kidneys. Acute oxidative stress caused by the toxins is associated with atherosclerosis, cancer, diabetes, rheumatoid arthritis, to name a few.

Lactation: Moringa oleifera leaf extract is said to be galactogogue. During women’s post-partum period, intake of this extract appears to boost significantly the milk production from 31 per cent to as high as 165 per cent.

The health benefits of this wonderful tree appear to be boundless. Apart from all the goodness discussed above, the regular intake of moringa is said to further help:

If eaten in large amounts, moringa leaves, pods or extracts can have adverse effects, such as stomach upset, gaseous distention, heartburn and diarrhoea. The moringa seeds have a certain level of toxicity, so an intake of only 3 to 5 seeds a day is advised.

As it is, the rule of thumb for those who have never tried it before is ‘measure and moderation’ before you work the Moringa olefeira produce into your meal plan. Moringa oleifera cultivation in Nepal as it appears is in a ‘rudimentary stage of evolution’. Cultivation of this “tree for life” seems literally zero. In the recent years, a handful of entrepreneurs, however, got involved in its plantation.

A gentleman from Butwal, Hari Prasad Bhattarai, has been onto moringa cultivation and runs a farm in Rupandehi, Butwal since 2009. “We also process the moringa leaves and produce moringa organic tea and powder,” he told me.

Likewise, another entrepreneur from Butwal, Dr. Yagyamurti Bhattarai, took up moringa plantation since a couple of years. “The moringa leaf dry powder I sent to Japan has been approved and I am looking forward to receiving a substantial order very soon, “Dr. Yagyamurti shared his enthusiasm with this scribe over the phone.”

If you are interested in buying Moringa oleifera products try these outlets: Swabalamban Vikas Co., Baluwatar, Kathmandu (01-4441170) or just log onto hamrobazar.com.

The information in this article is purely research-based. Some persons may have an allergic reaction to certain food, so, care must be taken before starting a new food regime by introducing it in moderation. Cross-reference and readers’ discretion is further suggested.